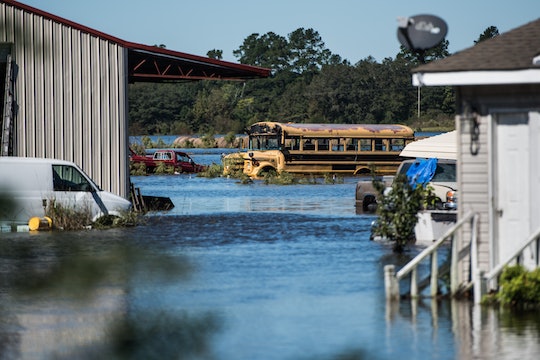 The lack of guaranteed paid leave to take care of kids can become a financial catastrophe for families struggling to make ends meet. But when natural disaster strikes, causing schools to close, it can leave parents in an impossible position. Hurricane Matthew's flooding has made it even clearer that paid leave needs a drastic overhaul in this country.

School isn't intended to provide free childcare. But with more than 67 percent of mothers working outside the home, according to the Washington Post, the necessity for reliable emergency child care is real. Schools have all kinds of reasons to closing, ranging from teacher development to emergency situations like the flooding in the aftermath of Hurricane Matthew. But just because schools are closed doesn't mean parents are able to take the day off of work too, leaving them scrambling and stressed out.

“It’s very stressful for parents to figure this out,” Kate Sinkins, a single mother in Arlington, Virginia, told the Washington Post. “And I’m one of the lucky ones because I can afford a babysitter.”

But being able to afford a babysitter doesn't guarantee there will be one available, particularly on short notice. The effects of last week's Hurricane Matthew left hundreds of public schools closed across North Carolina alone as emergency crews try and get electricity up and running again, according to WRAL. Schools in Wayne County, North Carolina, will be closed for the rest of the week, WRAL added, as a result of flooding. That's a lot of parents left to come up with child care alternatives.

Parents in America need some sort of emergency child care safety net and guaranteed paid leave is a great place to start. The U.S. is embarrassingly behind the rest of the world, particularly when it comes to new mothers and fathers, according to Forbes. And, according to the Department of Labor, only 12 percent on private-sector workers in the U.S. have access to paid leave.

In addition to expanding paid leave for all workers, the child care system in the United States desperately needs a makeover too, in terms of access, quality, and affordability. Child care now costs more than college tuition or a month's housing expenses, according to Child Care Aware, a child care advocacy group. And too often the result is desperate parents leaving kids at home alone, or worse.

But in addition to the cost for families for child care, early childhood educators are being paid low wages, causing many to call for government subsidies to help close the gap — one of those people being presidential candidate and Former Secretary of State Hillary Clinton. For those who balk at taxpayer dollars subsidizing child care, teachers and care givers argue they've been subsidizing the system for years by working for such low wages. And they have a point.

“Don’t tell me we don’t subsidize childcare in the United States,” Mary Brown, a childcare center director and childcare consultant for three decades told The Atlantic. “We do. It’s the teachers, mostly women, who’ve been subsidizing childcare all along.”

Clinton has proposed a more detailed plan that includes universal preschool for every 4-year-old, tax credits and subsidies for child care costs, and a raise for child care workers, according to the plan detailed on her campaign site.

American families need help, and emergencies like Hurricane Matthew just highlight how quickly parents can be left to make impossible choices between work and taking care of kids.