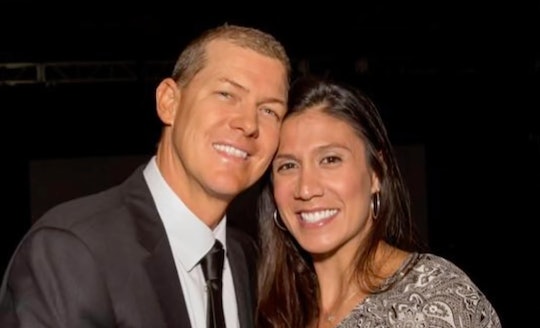 The professional sports community and fans alike were devastated after learning Kobe Bryant and his young teenage daughter died in a helicopter crash on Sunday. Tragically, seven other lives were also lost in the accident. Following the horrific news that stunned the nation, the husband of Christina Mauser, a victim of the helicopter crash opened up about he and his family are coping during this unimaginably difficult time.

On Jan. 26, a helicopter carrying nine people, including the pilot, crashed on a hillside in Calabasas, California, The New York Times reported. Bryant and his 13-year-old daughter, Gianna, were initially the only victims identified; by Monday morning, the remaining seven names had all been released. Among the others killed in the helicopter crash was 38-year-old Christina Mauser, a mother of three and a girls basketball coach at Harbor Day School in Orange County, according to USA Today. The mayor of Costa Mesa, Katrina Foley, confirmed Mauser's death just after 7 p.m. Sunday.

"I just learned that our amazing Matt Mauser of TiajuanaDogs lost his wife Christina in the crash," Foley wrote on Twitter. "She coached the girls' team. This devastating tragedy gets worse by the hour. So much pain for so many local families. Our hearts are broken & grieving for the families impacted."

On Monday morning, Christinas's husband Matt Mauser, called into The Today Show and reflected on the memory of his wife and the mother of their three children.

"She was extraordinary,'' Mauser told Hoda Kotb and Savannah Guthrie of his wife, who coached under Bryant on a travel team his daughter Gianna played on. "She was incredibly witty, funny, funny like nobody you've ever met. ... She was warm, she was incredibly bright, she was technologically incredibly savvy. She could figure out anything."

He also talked about how he was feeling in the wake of his wife's shocking death. "I got three small kids, and I'm trying to figure out how to navigate life with three kids and no mom. I'm scared," he shared with TODAY. "I think more than anything I'm a little scared about the future."

During the same interview, Mauser also shared that his wife and the NBA legend shared a passion for their work. "Kobe took these kids from private school and just made them gritty and tough,'' he told TODAY. "He was dedicated and so was my wife. They were dedicated to these girls."

Though it feels impossible to imagine what the families and loved ones impacted by this tragedy are going through right now, the many tributes shared and Matt Mauser's touching words about his wife and his friend may help bring comfort to everyone grieving right now.