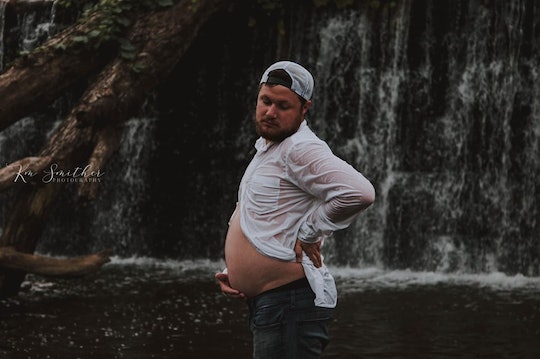 You know those romantic stories you hear and you're totally convinced true love does in fact exist? Well, this story of a husband subbing in for his wife's maternity shoot after she was put on bedrest is definitely one of those. After mom-to-be Kelsey Brewer received doctor's orders to take it easy, she unfortunately wasn't able to pose for a glamorous photo shoot. But don't worry, her hubby didn't let the experience go to waste. Oh no, he created a totally different, but equally incredible memory for them to remember for years to come.

Kelsey was put on bedrest about six weeks before her due date, which she admitted in a Facebook post is obviously "never ideal and isn’t the most fun thing to do." But her sweet husband and sister, Kentucky photographer Kiana Smither, decided to turn a not-so-ideal moment into a hilarious and memorable one. So the two headed out to a waterfall — Jared dressed in a loose white shirt, perfect for showcasing his "bump" — and had one amazing photo shoot.

Smither tells Romper that after noticing that Kelsey was feeling "super down and disappointed," Jared texted her with the idea of him replacing his wife in the photo shoot to "lighten her spirits and make her laugh!" And the photos certainly did the trick. For the "maternity shoot," Smither captured the dad-to-be looking into the distance, cradling his belly with a serene backdrop. In one photo, he forms his hand in the shape of a heart, gently placed on top of his belly.

Kelsey tells Romper she "was overwhelmed with happiness" and "cried tears of joys" when she saw the photos. "It was completely unexpected and took me off guard (in a great way)," she says. "Jared has always been the type of person to put a smile on someones face, yet I had never even imagined that he would come up with something so meaningful to make me happy."

Jared says he wasn't expecting the photo shoot to go viral — he did it because he simply wanted to "put a smile on [Kelsey's] face" when she wasn't feeling amazing during her last few weeks of pregnancy. "I just wanted to do something to make my wife smile in a time of struggle," he tells Romper.

Smither, a wedding photographer located in Frankfort, credits the photos going viral to her subject. "Jared has always been hysterical, he’s the life of the party and knows how to make everyone laugh," she tells Romper. "I always knew that if I went viral it would be because of him! And I was right!" As of Tuesday, the post has gotten more than 59,000 reactions on Facebook, over 44,000 shares, and a whopping 14,000 comments.

Not only has the photo shoot been a hit with thousands of people on Facebook, Smither says Jared is "by far" her "favorite maternity shoot" she's ever done. "He would do a pose and I would hype him up and encourage him," she says of the photo shoot. "I had my husband whose also his best friend there with me and the more we laughed the more into Jared got! If I gave him a pose he would make it his own and add this special flare to it!"

Since the photo shoot, Jared and Kelsey have welcomed their baby boy, whom they've named Kash Cooper Brewer! The little guy was born on Saturday morning, according to HuffPost, and weighed in 4 pounds and 5 ounces. And, fortunately, Kelsey tells Romper she's feeling much better. "We are very blessed with such beautiful baby boy! I am feeling really good, I am just working on taking things slow and allowing my body to heal the way it needs to heal," she tells Romper.

As for the man behind the lens? He's also feeling "very blessed to not only have each other but to have such a sweet little boy as well." And while the intention of the photo shoot was to cheer his wife up, which it certainly did, Jared's sweet and silly gesture made a whole bunch of other people smile, too. "While we weren't expecting these photos go viral," he tells Romper, "we both hope that it has brought many people as much joy as it has brought us!"