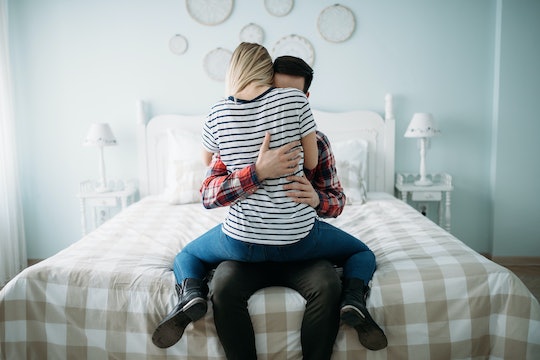 Kaycee tells Romper that her husband’s work schedule is overwhelming and his long absences are contributing to a feeling that the two of them live in different worlds. She is exhausted and confides that after caring for two toddlers all day, sex with her husband feels like a chore. “I don’t want to get sweaty, or make noise (we live in an apt with thin walls) or even put forth the effort to look enthusiastic.”

Thomas, a millennial father of three, had a similar experience. “The postpartum period very nearly killed me," he tells Romper. "There were medical issues with both the kids and the pregnancy and we had three babies under 3 years old. We were sleep deprived and depressed and all messed up. Our sex life dropped to life-support levels and it was… awful.”

When we become parents, our lives change in big ways. As women on our journey to motherhood through pregnancy, birth, and into the leaky and lactating state of postpartum, our bodies change in dramatic ways. Our time, which was once free, in those early weeks, months, and years, is dedicated in a heartfelt surrender to our little ones, and it can be a struggle to fit in singular moments of nourishing “me” time. Along with all of these changes to our basic needs and our pre-parenting life, it is not unusual to experience changes to our sex lives after becoming parents. The many moving pieces of a couple's sex life include changing appetites, a change in frequency and desire, and, often, a changing role for pornography.

I shower in the dark, I just don’t feel confident so sex is not fun.

One dad, Michael, tells me, "My relationship with my partner changed postpartum, in all the unfortunate stereotypical ways.” Michael shares with me that the frequency of sex, as well as the variety and when it happened, dropped off after the birth of their child.

Kaycee shares with me that part of the reason that she doesn’t feel like having sex is her lack in body confidence now that she is a parent and that she just doesn’t measure up to the unrealistic body images that her husband finds in pornography. “I’ve lost my old body. I’m overweight, I’m out of shape, I’m loose in my tummy and if I sneeze everything jiggles. I don’t look at myself naked, I shower in the dark, I just don’t feel confident so sex is not fun.”

Becoming a parent doesn’t mean that you will lose sexual interest in your partner but you may decide to prioritize a shower and scarfing down a bowl of pasta with ravenous enthusiasm while your baby is napping in lieu of a quickie in the bedroom with your partner. You also might want to take some time to reconnect with your body on your own before sharing pleasure with your partner.

Maryam agrees with the importance of self-care, telling me “It took me a long time to enjoy sex again after having a kid. To be honest I’m at my heaviest with a floppy tummy but our sex life is awesome. What changed? I started making time for myself. And connecting with who I was becoming.”

Forest, a millennial dad, tells me,“We didn’t (and still don’t!) have time for sex. We went from having a pretty healthy sex life to our relationship focusing on how we work as partners and having a toddler who sleeps, so we might actually have time for sex again. It’s a work in progress.”

“I think that the frequency in porn-watching increased in conjunction with the decreasing rate of sex in the relationship, which did correspond to my becoming a father,” says Michael.

And many mothers realize and support this outlet.

As a sexuality coach and the author of The Ultimate Guide to Sex Through Pregnancy and Motherhood, many of the clients who come to me are new parents struggling to find who they are as sexual beings during those first years of parenthood.

One thing we can do is honestly and openly actively listen to our partner’s fantasies and then openly communicate what type of touch would feel good, nourishing, connected for us as mother’s in the postpartum period. This is a beautiful time to explore new fantasies, mutual fantasies, and touch that is is mutually nourishing and that fuels a new level of intimacy in your relationship.

More Like This
Sex And Mom Guilt: When I Date Someone New, Am I Cheating On My Kids?
I’m A Newly Single Mom. How Do I Get Over My Body Insecurity?
In Search Of New York City's Most Luxurious Birth Experience
Does Pumped Breast Milk Have Antibodies? Experts Weigh In