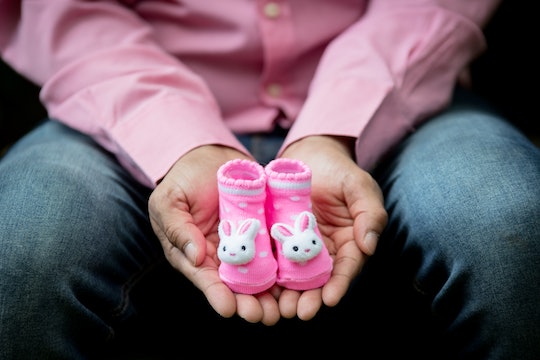 Seeing a couple announce their pregnancy to family and friends on Facebook is pretty common. For some, it feels perfectly natural to send out a virtual announcement with that adorable first ultrasound photo — or even when the pregnancy test shows even the hint of a second line (that was totally me, by the way). Reading them, the joy and excitement feel almost contagious, even when the writer is a perfect stranger. But one recent announcement moved thousands of readers for a unique reason. An Ohio husband’s touching Facebook post about infertility and miscarriage showed a different perspective on loss and a totally different take on the rocky road that some couples travel when building a family.

“Do you have a minute? I’ve got kind of a long story,” wrote Dan Majesky of Cincinnatti, Ohio in his Monday Facebook post. He went on say that he and his wife, Leah, had been struggling to conceive a baby. “Leah and I have been trying to get pregnant for over 3 years. Like all our plans, we didn’t start with a plan, but instead decided that if we got pregnant, that would be great. And then we didn’t get pregnant.”

That was the beginning of a long and heartbreaking roller coaster ride for the Majesky’s, according to the post. The story, which has been shared more than 5,000 times, recounts the multiple rounds of fertility testing, carefully timed reproductive treatments, and insurance battles the couple endured only to see month after month of heartbreak in the form of negative pregnancy tests and one positive test that ended in miscarriage.

The couple did not immediately respond to Romper's request for comment. Still, Majesky said in his post that the pain of watching other couples conceive easily made the couple’s losses almost unendurable:

And you see people scream at their kids, and beat them in Kroger, and you just want to die because you would give anything to have a child throwing a tantrum in the cereal aisle.

You don’t want to hate people. You don’t. I think babies are beautiful. I think kids are awesome, but you can’t help the jealousy. The envy. The resentment. It really creeps up on you.

Miscarriage and infertility are incredibly common among couples, though few choose to talk about it among family or friends — and even fewer choose to talk about it publicly, as Majesky did. As many as one in four couples will have to deal with the heartbreak of miscarriage, according to the American College of Obstetricians and Gynecologists, making it the most common type of pregnancy loss. According to the National Institutes of Health, some 15 percent of couples will fail to conceive after a year of trying. After two years, one in ten couples will still be infertile. And among those couples diagnosed with infertility, nearly one-third won’t get a clear explanation of why getting pregnant is so difficult.

Bringing infertility out of the shadows is important to help overcome feelings of inadequacy and even shame, according to a CNN report. And talking about it from a father’s perspective can be just as beneficial to men, especially as men account for nearly half of infertility diagnoses, according to the Mayo Clinic.

In an interview with TODAY Parents, Majesky explained why sharing the ups and downs — including the heartbreak of a miscarriage — was such an important part of the family’s pregnancy announcement:

I wanted to write a little more about what we had been through on the way to that announcement. Especially regarding the miscarriage, because neither of us wanted that to go unremarked upon. That was a hard time for us — a lonely time — but that baby left a permanent mark on us, and it didn't seem fair that it would get hidden away.

The post has brought hundreds of comments from supporters as well as those enduring their own painful struggle with infertility and pregnancy loss. According to the comments, people have reached out to offer support and encouragement, ask for advice, or even just to talk about their own experiences.

In his interview with TODAY Parent, Majesky said that he and his wife welcomed all the support and hoped that sharing their story (and the joy of finally becoming pregnant with their first child) would help others cope with the often long and isolating battles of infertility.

We'd like to think this is a rarity, but the doctor's office was always full. As much as the doctor might tell you 'This is normal,' since people don't talk about it — for whatever reason, sadness, embarrassment — it still feels abnormal because it's hidden away in private message boards and specific support groups, and not openly discussed.

According to his Facebook post, the Majesky’s are just 25 weeks away from welcoming their first baby, a little girl. And it looks like they’ll have plenty of people waiting, tissues in hand, for their birth announcement.