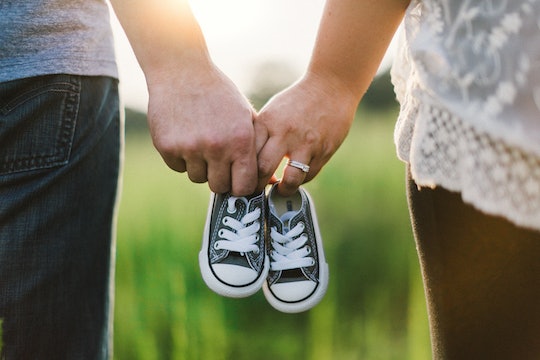 Why This Mom Will Deliver A Baby Without A Brain

During "the worst moment of her life" — less than a minute after she learned that the baby girl she was expecting would die very soon after birth — Keri Young was thinking about how she could help others. She decided on the spot to carry her second child, Eva, to term, largely to donate her organs to other newborns. It's a mind-bogglingly selfless plan in the midst of one family's unthinkable tragedy, and it moved her husband to publicly praise her in a heart-wrenching Facebook post. ESPN writer Royce Young is simply "in awe" of his "superhero" wife, who will give birth to a baby without a brain, and experience, as he wrote, the taxing pregnancy and recovery process with "no snuggly, soft, beautiful newborn to look at to remind you that it was all worth it."

Royce publicized the post when he was in New Orleans on Feb. 17 covering the NBA All-Star Weekend, where he met a boy who needed a liver transplant. This transported him back to the doctor's appointment 19 weeks into Keri's pregnancy when the couple found out that the baby girl they had thought they would raise along with their 2-year-old son, Harrison, was developing without a brain. Royce, of course, was "crestfallen and heartbroken." But Keri, "through full-body ugly crying," almost immediately asked the doctor about donating Eva's organs.

And, just as Keri's urge to redefine her personal calamity to change the lives of other parents and their babies was immediate and absolute, another emotion joined Royce's all-encompassing devastation: admiration for the woman he married. "It's one of the most powerful things I've ever experienced," he wrote in the post of that moment, and his ode to Keri's selflessness did not stop there:

In the eight years we've been married (and 15 years together) I've had a lot of moments stop me in my tracks where I thought, 'holy crap, this woman I'm married to, lucky me.' But this one was different. It hit me that not only am I married to my very best friend, but to a truly remarkable, special human being.

Keri's husband is far from the only one blown away by her decision. Royce's post has garnered more than 15,000 likes and nearly 6,000 shares by Wednesday morning, just five days after it went live. But the real-world implications of participating in neonatal organ donation far exceed those of a viral internet sensation.

According to 2014 NBC News report, neonatal organ donation is a procedure so rare that many doctors don't tell their patients about it, or don't even believe themselves that it is possible. But even though just 21 organ donors in the United States were one week old or younger between 2008 and 2013, it's an undoubtedly life-saving tool for babies born needing organ transplants to survive.

Importantly, it's can also be a balm on the aching hearts of parents who lose their babies. After Deanna Slifka's daughter Sophia was stillborn after a planned emergency c-section in 2012, NBC News reported, she and her husband opted to donate the baby's tissue and organs.

"Obviously, it was the worst moment of my life,” the Ohio resident told the outlet, later adding that the choice was one of the main factors that helped her get through the ordeal. "But I knew there had to be more to her life than 39 weeks inside of me. She held not just the potential to save another baby, but to save another parent as well."

The Youngs, of course, know that they will feel agony where there should be joy when it comes time for Eva to be born. But Royce is taking comfort in knowing that his daughter will make a huge difference, and perhaps even save another family from feeling the pain he and his wife do now. "There's another family out there hurting and hoping for a miracle for their baby, knowing full well someone else's baby will need to die first," he wrote. "Eva can be that miracle."