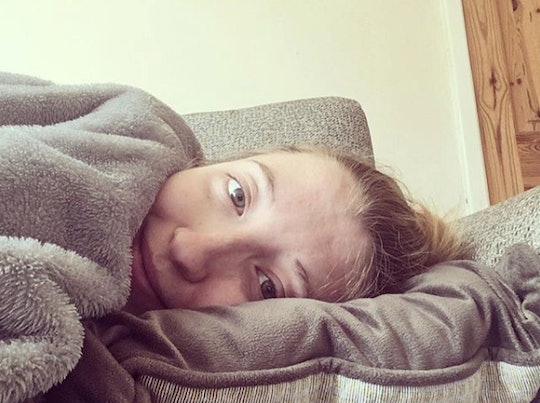 When I discovered I was pregnant with my first and only child, I daydreamed about what giving birth would be like. Leading a somewhat alternative lifestyle comprised of regular meditation and a pre-preggo vegan diet, I was interested in taking a more "natural" birthing route. Sadly, hypnobirthing didn't work for me, as much as I hoped it would.

Prior to childbirth, what I'd seen of the labor process on TV seemed quite simple — the woman's waters would break, she'd be laid in a hospital bed where she screamed through some contractions and squeezed someone's hand aggressively, and then she'd give an almighty push and a baby would appear as if by magic. Having little to no experience with babies (in or out of the womb) and a Catholic school education, I really didn't know any better.

Two of my closest friends were due to give birth a few months before me (my gurus for anything pregnancy-related) and they hooked me up with a hypnobirthing CD, which I promptly downloaded onto my iPhone. If you are not familiar, hypnobirthing is essentially a childbirth pain management technique involving deep breathing, meditation, and visualization. The CD contained three guided meditation tracks. As a frequent user and fan of guided meditations pre-pregnancy, I lapped these up eagerly. The first time I listened to one where you visualize meeting your baby, I literally cried. My friend told me she did too.

There was a point in my pregnancy when I had a low-lying placenta, which is where the placenta can potentially block the baby's way out. If my placenta hadn't shifted out of the way towards the end, I would have needed a Caesarean, the idea of which petrified me. If a c-section was definitely on the cards, I planned to have literal hypnosis to quell my fears — some people view hypnobirthing less as pain management than of a way to control birthing fears, whatever route you take.

In addition to listening to the aforementioned guided meditations every day, I also enrolled in an online hypnobirthing course. I chose to go down this route rather than attend a course in person because it was a much cheaper option, it was more convenient, and my friend recommended it.

The narrator was describing flying off on a magic carpet where I'd collect my baby.

It gave me something to focus on throughout my pregnancy and taught me a lot. Before delving into hypnobirthing, I'd thought of it as a hippy route for those in denial about the realities of giving birth. However, the course instructor explained that there was evidence to back up the techniques: deep breathing can help keep your body pumped full of oxygen, quashing the adrenaline-fueled "fight or flight" response, and a Cochrane review found some evidence that length of labor is shorter and pain intensity lower in women using hypnobirthing techniques than controls.

So by the time it came to write my birth plan, I was feeling pretty good. If you've had a baby or are pregnant, you'll know all about the birth plan; it's basically a document stating what you would prefer if your birth goes exactly to the letter. It can include your pain relief preferences or how you want the medical staff to refer to things — for example, some hypnobirthing instructors and, consequently, students refer to contractions as "surges."

My birth plan was pretty simple: I wanted a water birth with nitrous oxide and oxygen, and I wanted to be able to move around freely and eat. According to my hypnobirthing course, the best position to be in during labor was upright, plus being able to snack and keep hydrated meant that I would be fueling my body throughout.

However, because of a slight complication that I discovered towards the end of my pregnancy (which resulted in a bunch of interventions) my birth plan may as well have been ripped up and thrown out of the window. Long story short, I used an at home test to discover I was Group B Strep (GBS) positive. GBS is an infection that, if passed to the baby during labor, can cause illnesses like meningitis or in some instances even result in stillbirth.

I was then tested at the hospital, where they found me to be negative. Confusingly, the bacteria comes and goes; a midwife explained to me that you can test positive one day and negative the next. So after a discussion with my midwife, we decided I would have intravenous antibiotics during labour as a precautionary measure, just in case the bacteria reappeared again.

I felt pretty OK about this course of action; even though I was scared to have a drip in my hand, I knew it was the safest route to take for my little one. Plus, the antibiotics only needed to be administered every four hours and I was still allowed to go into a birthing pool and move around with my cannula in. So at this point nothing had really changed in terms of my birth plan.

Aside from losing pieces of my mucus plug, the day I went into labor was pretty normal, until my husband arrived home from work. It was then that my waters broke. Normally, we'd have called the hospital to inform them my waters had broken and I'd be given 24 hours until I'd be called in to be induced. However, with my testing positive for GBS, they wanted us to go in straight away.

You're supposed to breathe the baby down and out. But, considering I couldn't feel my legs and had to push as hard as I could to birth my baby, I couldn't really put this into practice.

When we arrived at the hospital, a doctor informed us that because I'd tested both positive and negative for GBS, the choice was mine as to how I wanted to proceed: I could be classed as negative and I'd go home to wait for contractions, or I'd be classed as positive and I would need to be induced with a hormone drip to get my contractions going, in order to decrease the risk of infection. Of course it was a no-brainer that I wanted my baby to be safe, so we chose to go down the "positive" route, knowing full well that my dreams of a water birth would be shattered.

So there I was, hooked up to two intravenous drips, one pumping me with antibiotics and the other with hormones. Initially, I was able to utilize my hypnobirthing teachings as I could still stand upright. We played a hypnobirthing meditation track that I'd practiced with for months, while I used gas and air. In fact, at this early stage the hypnobirthing really helped to lighten the mood — the narrator was describing flying off on a magic carpet where I'd collect my baby, and in my "high" state, I couldn't help but laugh at the juxtaposition between my situation and the fantastical magic carpet meditation. What was once a beautiful vision during my pregnancy was now an hilarious image.

However, after many hours of labor stuck at 4 centimeters dilated, it dawned on me that I'd been on the bed for a long time. According to my course, being laid down on a bed is not a great position for birthing as you're working against gravity. But I was exhausted. It was at this point that I was offered pethidine, an opioid, as it was already the next morning and I'd been in the earlier stages of labor since around midnight.

This is when the hypnobirthing became obsolete. Due to the fact that I was so exhausted, in a ton of pain, and under the influence of drugs, I was falling asleep after each contraction. After a while of this (reader: hours of this) I was then offered an epidural, which was something I had been against throughout my pregnancy, but in that moment I needed something, anything, to give me a break. I was given a catheter to assist me in going to the bathroom, then I had to be held still by my mom and a midwife to ensure the anesthetist didn't miss while I moved involuntarily from my contractions.

After the epidural, relief came quickly and I almost felt as if I wasn't in labor anymore. I'd highly recommend them to anyone giving birth if you're on the fence about it.

I could have started my meditations again at this point, but considering we were well into the afternoon of the next day, I couldn't move, and was wired up to three different drips, hypnobirthing wasn't at the forefront of my mind. I was also advised not to eat, as my baby's heartbeat kept dropping so there were a few moments when a c-section was almost on the cards.

When I finally reached 10 centimeters, I was told that if I didn't push my baby out within the next half hour or so, I would likely need a c-section. This was my motivation to dig deep and give it everything I had to get my little one out. According to the hypnobirthing techniques I'd learned, you're supposed to breathe the baby down and out. But, considering I couldn't feel my legs and had to push as hard as I could to birth my baby, I couldn't really put this into practice.

After a cut to the nether-regions, coaching from a second battle-hardened midwife, and a bit more pushing, he arrived. Everything I'd been through faded into insignificance and I was just so relieved that he'd arrived safely. I found out afterwards that they actually allowed me two hours to birth my baby, not half an hour — it was good to know that they believed in me and saw how hard I was working.

So even though hypnobirthing didn't work for me, or at least not in the way I hoped it would, it did keep me super calm and relaxed on the lead up to giving birth and it gave us a good laugh amidst the madness.

I still recommend hypnobirthing to other pregnant women. It didn't work for me, but at the end of the day, I'm over the moon with how my story ended.