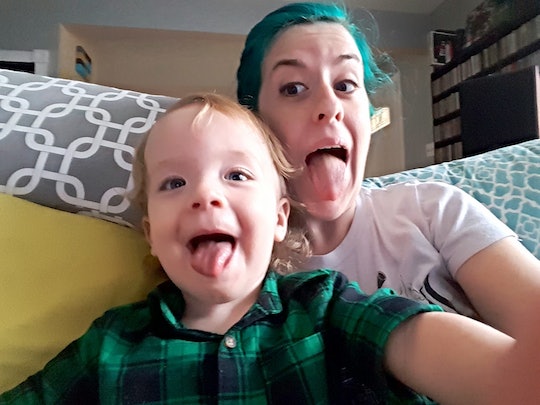 Most of us probably wish we could relive our younger years. OK, maybe not all of those years, since I’d love to forget a couple of my embarrassing fashion moments in high school. Yet lately I’ve been envious of my young son. He may only be 3 feet tall, but he has more sass in his little finger than most divas do in their whole body. He gets to squeal as much as his heart desires when he’s happy and sob as loudly as he can over the most irrational things. Why? Because he’s a toddler. He throws a temper tantrum whenever he feels like, and when things don't go his way, he tantrums even harder. Yeah, it's frustrating and embarrassing (at times), but he's still a little person trying to navigate his feelings and the worst and the fact that he can't have what he wants right now. He acts like a toddler, and I can't really expect much more of him.

Even though we were all his age at one time, it’s hard to remember exactly what it was like. I wondered, though, what it might be like to feel so uninhibited again. When was the last time I said “no” without giving a reason or jumped on the bed because I was happy? OK, full disclosure: the last one I actually do pretty frequently, but you get the point. My son doesn't do anything unless he wants to (or I make him). If he wants to stay in his PJs all day and I want him to change, he makes sure I know he's not down with the plan. If he's offered healthy foods instead of his usual go-tos? He doesn't back down from getting what he wants.

I decided that, for one week, I’d allow myself to act just like my son. I was really interested to see what, if anything, I'd learn from reawakening my inner child. Would i just end up embarrassing myself? My toddler's uninhibited lifestyle was downright tempting, so I decided to give it a shot. I mean, wouldn’t we all like to take a little break from the responsibilities and social expectations that come with being a grownup?

Here’s what I found after a week of letting loose, toddler style.

Day 1: Because I Said So

Normally when I’m heard uttering the cliché phrase, “because I said so,” it’s because I’m telling my son to stop doing something. On the first day of this experiment, however, it was more of an enthusiastic inner mantra. Anything I wanted to do I got to do because I said so. If I ever wavered on following through with something, I just reminded myself that my toddler doesn’t hesitate to do whatever indulgent thing he wants.

Some people – mostly friends without children – say that most parenting problems would be solved if the toddler wasn’t in control. It may look like my son whines and then I give in to his demands. But I’d be surprised if you found one parent who’s never caved and given snacks in the car just to prevent a meltdown. Sometimes you just do what you got to do. And today I did just that – but for myself. I didn't want to eat a healthy lunch, because today was just one of those days and I didn't have to do it if I didn't want to.

So I channeled my son: What would he do if he wanted cookies for lunch instead of whatever was offered on his plate? He'd eat cookies, duh! So you better believe I took out a package and ate the whole thing. Why? Oh, because I said so.

Kind of keeping up with the theme of day one, I decided to encourage myself to be even less inhibited. One of my son’s favorite things to do, especially after getting home from nursery school, is to take off his shoes and pants. What can I say? The kid loves his freedom. He also freaks out like you’re trying to assault him when attempting to get him dressed in the morning.

As I got my son ready for school, still in my PJs, I realized that there was no good reason for me to get dressed. My husband dropped him off, went to work, and I stayed home in my never-felt-so-good sweatpants and typed away on my computer in utter comfort. When the time came for me to go out in public, I threw a good ol’ fashioned hissy fit about having to put on real pants. My partner may have been perplexed, but I was beginning to understand why my son hated real clothes so much.

Few things on this earth are louder than my son when he’s unhappy. Whether he’s not getting what he wants or he doesn’t want to do something, he lets it be known. It’s sort of like a mix between a bellowing whale and a howler monkey, and I have no clue how he makes most of the sounds he does. I get that babies don’t really have a choice in crying. It’s their only way to communicate. But toddlers are confusing when they can talk but choose to wail instead.

I’ve never understood how he can carry on with such passion. Doesn’t he get tired of whining? On day three, he simply did not want to sit still for me to tie his shoelaces. So when he started whining, I copied him. If he squeaked, I squeaked. At first he seemed a bit caught off guard that I was screaming with him, and even tried to out do me. But when he realized that I was being playful, that’s when it started becoming fun. We got louder and louder until we both started laughing. It was exhilarating to feel like a child again, free from the confines of social expectations. Perhaps I’ll use this trick more often!

On day four my period came, and I was not feeling it. Using my son as inspiration, though, I thought about how he’d handle things. If there is a task to be completed, like putting his toys away, and he’s not about it, then guess what? Those toys aren’t going anywhere anytime soon. More and more I was admiring his brazen and honest attitude.

I knew I had plenty to do that day. I had pieces to write, laundry sitting in the washer, phone calls to make, and not an ounce of energy to do any of it. Taking a cue from my little dude, I embraced my lazy side. Lounging on the couch in my PJs had me feeling guilty at first. Trust me when I say that sensation didn’t last long. Before I knew it, an hour had passed and I was OK with it. I had the whole day to get the things I need to do done – and just like him, I planned to do it at my own pace.

Past the halfway point in the experiment and feeling quite liberated, my husband and I took our son out for a little adventure. We had to pick up some things in the mall anyways, and thought we’d give the play area a try. We’d taken him a couple times before, but he’d gotten overwhelmed by all the noise and activity before. Now that he’d had experience socializing in nursery school, we wanted to give it another try.

Perhaps it was because he was a little older or maybe it’s that I was right there with him, but he was having the time of his life. Embracing my inner child, I slipped off my shoes and ran around with him. We jumped around, shouted, did silly dances, and it was great. I wish I could tell you about people staring and how it made me feel, but I can’t. I was so focused on the fun we were having that I couldn’t even tell you if anyone else was there, let alone if they were judging me or not. I loved it.

If you have a toddler or have ever spent time around one, you know that meal time is about as easy to get through as negotiations between North and South Korea. One wrong move and you’ve got a war on your hands. This may get me some flack, but I’ve resorted to bribing my son with BBQ Pringles if he agrees to eat his dinner. I assure you he has a healthy and balanced diet, but he acts like what we feed him is the worst ever.

I decided that for one day and one day only, I’d not only let him eat whatever he chose, but I’d also follow his diet. For breakfast we had waffles and Goldfish (crackers, don’t worry). So far so good, right? Lunch was Morningstar Chik’n Nuggets, lots of barbecue sauce, raspberries, BBQ Pringles, and more barbecue sauce. Dinner was a banana, more Goldfish, more Chik’n Nuggets and barbecue sauce, and two veggie-flavored rice rusks. Surprisingly, it was fun to be his food buddy and eat without worrying about calories. I don’t have the best diet by anyone’s standards, so it was actually a bit of an improvement to eat what he ate, albeit in larger portions than him. My son and I usually eat together anyways, so it wasn’t a big shock to have mommy there with him. He did enjoy getting to pick off my plate, though.

I’m still not 100 percent sure what hater blockers are, but I think they might be these sunglasses. Whatever they are, I metaphorically put them on for the final day of the experiment. I honestly hadn’t given any thought to whether or not people might judge me for acting like my toddler. But for the first time in the experiment, I noticed people throwing me a wayward glance when we were in the supermarket. My son was babbling away, quite loudly, and I was being silly right back at him.

We were on an aisle with two or three other people and my son and I were cheerfully making funny sounds to each other. One woman, who looked to be in her late 40s, made an audible grumble. I heard it, but ignored it. Then she sighed and grumbled even louder. I looked up at her and she was staring right back at me. Since my inner child and I had become pretty familiar over the past week, I didn’t feel at all embarrassed or guilty. It felt so satisfying just to let her judgments roll of my back. I just smiled at her and rhetorically asked, “Aren’t they just so fun at this age?” She feigned a smile and moved on, and I was surprised by my own confidence. In a way, her judgments and my lack of caring about them only further cemented having faith in my own parenting choices.

Did My Toddler Teach Me Anything?

Though I didn’t expect to come away from this experience with an urge to throw tantrums, I was interested to see how it would go. It felt like a vacation – and not like the kind where you come back needing a week to recuperate, either! It was like I got to check-out from adulting and briefly go back to the carefree world of my youth. I felt like I got closer to understanding what goes on in the cryptic mind of my toddler. I got to be his playmate, rolling around on the floor with him and letting my adult hang-ups fall by the wayside.

There will be plenty more opportunities to act as a disciplinarian in his life, but for that week it was insightful and fun to be his partner in crime. Rarely does it seem like there’s intention behind his mischief; he just wants to do what makes him feel happy and free. And at the end of the day, who can argue with that?