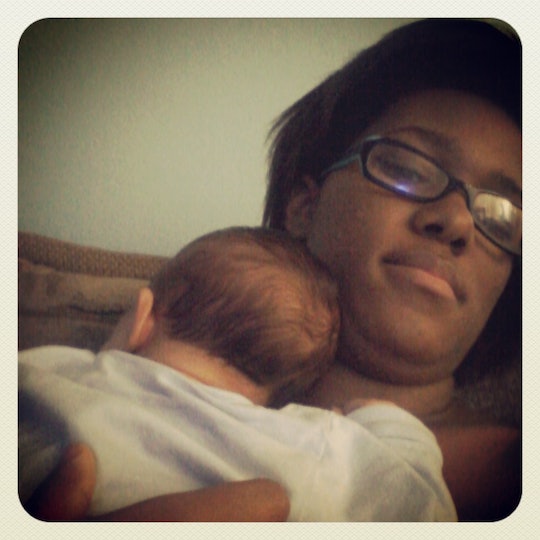 I Actually Slept When My Baby Slept

Before I gave birth to my son, I got a lot of advice. Most of it went in one ear and out the other, but the one that stuck with me the most was “sleep when the baby sleeps.” At first, it struck me as seriously unrealistic: when you have an infant that sleeps every few hours, how are you ever supposed to get things done? But even though I initially thought it was absolutely ridiculous, as my son got older, it was the thing that saved me.

In those first few weeks after I brought my son home from the hospital, he didn't get up that often at night, so that was the only time I would sleep. During the day I would do a million things: laundry, shop for groceries, make dinner, spend time on the computer. I'd do pretty much everything but sleep. And it was OK for a while.

But then, around six or seven weeks, my son threw me a huge curveball: he would be awake for absurdly long stretches of time. He’d wake up around 3:00 or 4:00 in the morning and we’d watch the sun rise together three hours later. Eventually, he would get tired again and finally go back to sleep, and I’d pass out next to him. Sometimes I would try and stay up to get things done, but then after an hour and a half of him being awake in the middle of the night, I’d be smacking myself in the face to keep awake. I decided then and there that as soon as his head finally hit the pillow, mine would too.

Even at such a young age, when my son was awake, he was AWAKE. Very rarely could I pat his back and get him to go to sleep once his eyes popped open. Sitting in the dark with him didn’t discourage him from being awake and it just made me sleepier. He wanted to be engaging with the world around him. He was just a little peanut, but he had to be right in the center of all the action. If I didn’t give him what he deemed a sufficient level of engagement, he’d let me know it. I’d put him down on his belly for tummy time and sit next to him and fold clothes while we listened to music, or I’d put him in his swing and we'd watch a movie together while I’d send out emails or try to write. Sometimes I’d just prop him up in my lap and talk to him. But as soon as he started to fuss and get sleepy, I’d prepare myself for a nap. Because if I didn’t, I would be in big trouble.

Sleeping when the baby sleeps was the best piece of parenting advice I ever got.

At a certain point, sleeping when he slept just became second nature to me. Once, he fell asleep just as I finished making dinner and I put my plate in the microwave to eat when he woke up because I needed to sleep, too. I constantly felt like a zombie, so missing a nap while he napped wasn’t really an option.

Our middle-of-the-night hangouts finally began to subside around seven months. Yes, you read that correctly. I endured about five months of sleepless nights and watching the sun rise with my little dude. I knew the late-night television programming schedule by heart, including what time PBS started showing kid’s shows (6:30am EST.) Once he started sleeping more consistently and just woke up early, I had gotten used to sleeping whenever he slept. At that time, he was still taking two naps a day, so if I was feeling bold (or if I had a lot of coffee) I would stay up during his first nap, and then join him for his longer second nap. It just became second nature for me. When he was awake, he was usually a whirling dervish of energy, so I needed to take that nap to gear up for what he was going to be like when he woke up. Napping in the middle of the day gave me the extra boost I needed to get through the rest of the day.

Even though I totally balked at the idea of sleeping when my baby slept at first, once I embraced it, it was the best piece of parenting advice I ever got. I found ways to get the things I needed to do done when he was awake (babywearing was a godsend), or I'd do them as soon as he fell asleep, which still left time for me to get a few minutes of shuteye myself. So if you have a newborn and you're having trouble sleeping, you should give it a try, even if it’s only a catnap during your baby’s longer nap. You’ll probably feel A LOT better.