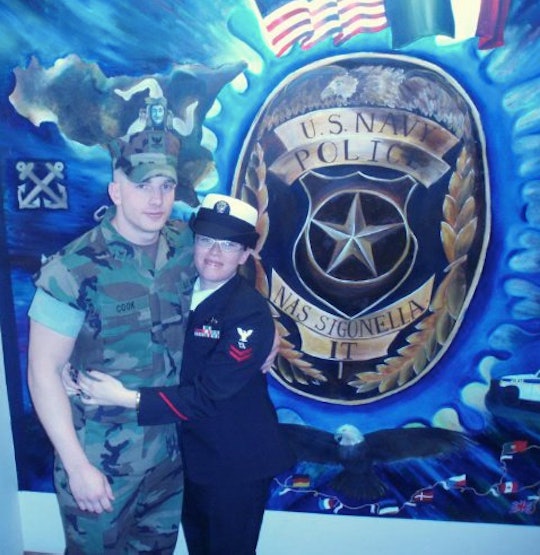 I Am A Veteran & A Mom, And This Is What Veterans Day Means To Our Family

For 13 years I've lived this military life. For the first six years I was on active duty, which is full-time service, and for the last seven, I've served my country as a military spouse and a mom to a sweet little girl. My sacrifice started the moment I left for boot camp. I waved goodbye to my family from the rear window of my recruiter's car with tears streaming down my face and wondered when I'd see or talk to them again. I was just a baby in the grand scheme of things. I'd only been 18 for only four days, and already I was off to serve my country.

For a time, I believed that those first few years were the hardest. I married a fellow sailor at just 19 and I'd been deployed within the first year of our marriage. We felt like we were a divorce statistic waiting to happen. There were bets on how long our marriage would even last, and there were moments even we doubted we'd survive. I always thought that being the one deployed was harder than being the one left behind. I was stuck on a big gray ship in the middle of some ocean while my husband got to be home near friends and family. He could do what he wanted, whenever he wanted. He didn’t have to wait in line to take a shower, or be woken up after lights out for a man-overboard alarm. He didn’t have to wonder when he'd make it home again.

When it was his turn to deploy, I couldn’t have anticipated the predicament we'd be in. I was pregnant with our first child after eight years of marriage, and I'd left the military and was now a civilian. Soon I'd been the one left behind. I'd have to go to baby appointments by myself. I'd have to hear baby's heartbeat alone. I'd feel baby's kicks alone. I'd assemble things for the nursery with no one there to read me the directions. And my husband would only be able to visit us twice over the course of 16 months.

On his last visit, our daughter was born. I was so grateful to have him there, grateful that he could see her come into this world, but it was a bittersweet moment. Just seven days later, on her seventh day of life, I stood by, fighting to keep my composure, as I watched my husband lean down and kiss our daughter goodbye. He was off to war again. We were parked curbside at the airport and I watched my big, strong, military partner tremble, fighting to hold back the tears we both wanted to cry so desperately.

When he left, I cried myself to sleep, playing the moment at the airport in my mind over and over again. There is no book, no advice, no amount of life experience that can prepare you for the heartbreak of a moment like that. Every other sacrifice up until that point felt like selfish pity. But this, this was sacrifice; this was pure giving.

Though thousands of miles apart, our suffering would be equal. He longed to be with his family, to watch our daughter grow, but instead we relied on Skype and pictures to show how she had changed. And I longed to have him by my side, helping me raise our girl and comforting me when I wasn’t sure I was doing this whole parenting thing right.

Veteran’s Day for us is a 365-day event. We celebrate and remember our own and each other's sacrifices because we don't have the luxury to forget the things we've given up for each other, for ourselves, and for our daughter in order to serve.

One of the most common questions we get is: So why'd you do it? Knowing the kinds of things you'd sacrifice — birthdays, milestones, births, school events, anniversaries, memories —why do you still live this life? Is it because it's the only thing you've ever known? Maybe. Maybe not. For us, we've committed to a life of service. We've seen things we cannot unsee, and in seeing that, my partner and I want to defend and protect not only our country, but the children we're now raising in it.

I want our daughters (I'm pregnant again!) to know what commitment and sacrifice look like, because though it is certainly hard, it comes with great reward. When you have gone to the depths, when you have survived war, tragedy, and countless other things, you have a perspective of the world and of your country you could not have gained any other way. We've learned that "freedom isn't free," and so will our children.

Instead, today I will be glad and thankful for all the veterans and the active duty personnel who make it possible to live in a country that's free. I'll be grateful to them for the future my children will have.