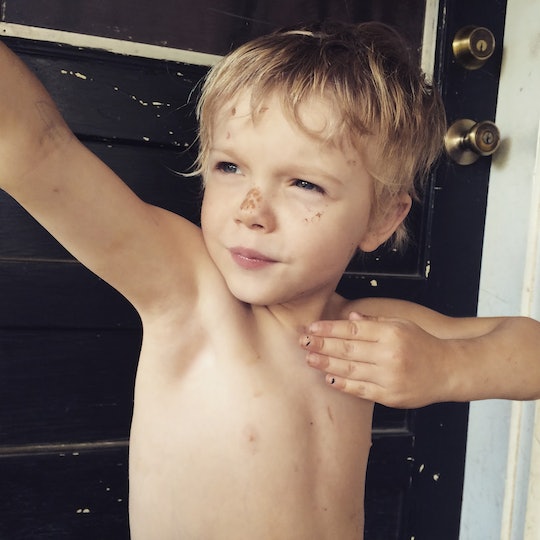 I Am Breastfeeding My 4 Year Old, And It's The Right Choice For Both Of Us

I didn’t plan it this way. You don’t look down at a tiny newborn and think, I will breastfeed until you’re nearly 4 years old. But that’s what happening with my middle son. And I’m happy with it.  The AAP recommends nursing until your baby is 1 year old, and thankfully, there are very few people who would bat an eye at a woman breastfeeding her 12-month-old child. The World Health Organization goes even further, recommending breastfeeding with complementary foods “for 2 years of age or beyond.” While some people might think a 2 year old is too old to nurse, most women would shrug their shoulders at it.

There’s a second part to the AAP recommendation, however, that some people don’t see. Breastfeeding should continue, says the most respected body in American pediatric medicine, for “as long as mutually desired by mother and child.” Breastfeeding, for my son and I, is still mutually desired. His age doesn’t factor into it. Breastfeeding is still an easy way to calm him down, to help him find his center, to give him a place to rest, to show him he’s just as loved as his baby brother, to help him go to sleep, and for any other number of parenting reasons we’re not ashamed to admit.

This shouldn’t be a shock. Anthropologist Katherine Dettwyler, Assistant Professor at the University of Delaware, has used primate data to do extensive research on the natural age of human weaning. She’s come up with anywhere from 4 to 7 years old. So my son and I are normal (human) primates as we chug along, steadily, at 3 years, 9 months.

I’d say I set 2 years as my nursing goal with him, but I’d be lying. We never set a goal beyond nursing itself. I’d already nursed his older brother until he was 3 years old, so when people asked me how long I planned to keep breastfeeding my second, I shrugged and said, “However long he wants.” If you had pressed harder, I’d have said that 4 years was my cutoff. And now we’re swiftly approaching that deadline.

I've nursed my son for this long for a number of reasons. First, he wanted to. It was his decision to continue; I just sort of went along with it. Nursing didn’t bother me, and it helped stop tantrums (anything to stop tantrums, amirite?). Breastfeeding was an important way for him to connect with me. It still is. I wasn’t going to take it from him because he’d hit some arbitrary age.

But nursing my son became very important when I became unexpectedly pregnant around the time he turned 15 months. Historically, my pregnancies haven’t been pretty, and my third was no different. I began vomiting almost immediately, and I couldn’t sleep with him anymore — I couldn’t bear to touch anyone while I slept. Luckily, breastfeeding during the day helped him still feel connected and close.

During my third pregnancy, I developed hyperemesis gravidarum (I vomited till I peed myself and then vomited some more). I was bedridden for three months, endured one hospital stay, and felt like death most of the time. Luckily, one of my medications had increased lactation as a side effect. That let me keep nursing right through pregnancy, when a woman's supply most commonly dries up. Nursing allowed my son to connect with a mother who wasn’t very connected to his life anymore. I spent most days in bed. Other people took care of him. But they could always bring him into breastfeed. He’d stretch out next to me, cuddle in close, and smile. I’d stroke his hair and sometimes cry in gratitude that I had this one thing I could still share with him.

People may be “grossed out” by the idea of nursing an older child because they think it’s somehow perverted, or that the I'm just doing it for my own benefit. Believe me, you can’t make a child nurse. If they don't want to, they don't. They simply refuse to latch, and as so many women know, no power on earth will make a baby latch when he or she doesn't want to.

I don’t nurse to somehow keep him a baby. I nurse for my own reasons — and for my son’s. We’re at 3 years, 9 months, and still nursing once in a while. I’m happy with that.  He is, too.

More Like This
34 Instagram Captions Perfect For Preschool Graduation Photos
17 Best Potty Training Products For Toddlers
From Captions To Gifts, These Are All The Kindergarten Graduation Ideas You Need
Ashley Graham On The “Fun, Organized Chaos” Of Raising Twins