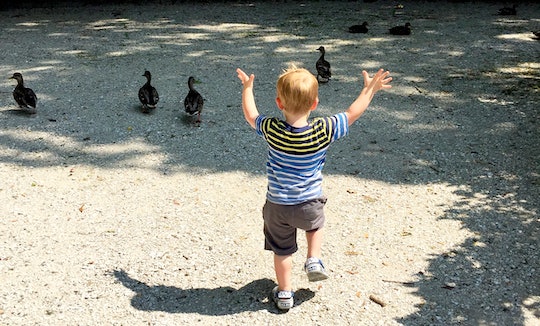 I Am More Worried About Our Boys Than Our Girls

Monday is my absolute favorite day of the week because it’s the day I take my 2-year-old son to his dance class. I have never seen him get more excited about anything in his two years on this earth than he does about this dance class. His face lights up throughout and he stands right in front of the teachers, tapping his little feet and wiggling his little body out of sync with the music. He has always been the only boy in a class full of tutu-clad little girls and I know he’s too little to notice or care, but I often wonder at what point that will shift. I feel like we have made such strides in raising our girls to be strong and capable, but we still have a ways to go in the messages we send to our sons. I am far more worried about our boys than our girls.

When my son was an infant, I had a lot of t-shirts for him that said things like “tough like Daddy” and “wild one.” I thought they were cute and didn’t really see the harm in them until he got a little bigger. Then, I started to worry about the messages that these t-shirts would convey to the world about who he was or, even worse, what they would convey to him about who he was supposed to be. I sought out positive slogan t-shirts for boys, and found a lot of companies who made shirts for girls — a line for girls who love math or science, dinosaur shirts for girls — but there were not nearly as many shirts with positive or gender-neutral messaging for boys. There were a lot of companies designing shirts that encouraged girls to be proud of liking things that are typically seen as “male” but very few if any shirts directed toward boys who enjoy stereotypically “female” things. I worry that, as far as we have come with breaking down the barriers between genders, eventually my son may start to get the message that dance class is something mostly done by girls.

My son likes babies, I think because he is with his mom all day and enjoys being snuggled and held, so identifies with being a nurturer.

When we walk down the toy aisle in Target (one of our favorite pastimes), it always strikes me to see the obvious gender biases at work even for toys marketed at the smallest of babies. On this past weekend’s Target run, my husband separated from us for a bit to search for a new shower head, and my son and I roamed aimlessly for a bit, until we inevitably wound up in the aisle where the dolls are. My son likes babies, I think because he is with his mom all day and enjoys being snuggled and held, so identifies with being a nurturer. Also, a lot of the toys in the doll aisle are sparkly, shiny and bright and frankly just a lot more visually attractive than let’s say, the truck aisle.

My husband found us a few moments later and said that he knew he would find us “in the girl aisle…” I knew he didn't mean anything negative by it because he is 100 percent supportive of whatever our son chooses to gravitate towards, but little throwaways like that are absorbed by the sensitive little ears of our boys who are quickly learning about the world around them and how to find their place in it. Little cues like that funnel boys into a narrow aisle where old, sometimes harmful ideas about masculinity are all around them.

For so long, female voices have been squashed and pushed to the side, I'm glad we are beginning to empower our girls and show them that they really are capable of anything. There are so many strong female role models for our little girls to look up to but I worry about the options for our boys. We almost had a female president and can now say “girls can be the president too,” but we don’t make a point of creating space for our boys to explore their identities.

It almost feels like the world believes boys are born with some sort of inherent toxicity that a parent must undo, rather than born as innocent little people who have limitless potential for goodness as well.

The focus right now is on the many terrible men uncovered by #MeToo, and on the outsized male personalities who (still) seem to define "success," and less about positive role models for our sons. It almost feels like the world believes boys are born with some sort of inherent toxicity that a parent must undo, rather than born as innocent little people who have limitless potential for goodness as well. My son is sensitive, kind, and expressive, and I don’t want him to lose sight of those parts of himself as he grows up. I don’t want him to feel like in order for him to be successful in life that he has to be tough and walk all over people to get where he wants to go. I work very hard as his mother to be sure that he knows that it is not only OK to be sensitive, but that it's a trait that will serve him well in the future if he continues to embrace that part of himself. I want him to feel like he can be and do anything.

As a mom of a boy growing up in the world today, I feel that it is my job to show him that he can be whoever he wants to be as long as he is kind and respectful. I feel like there is this dance of opposites at play that I strive to teach him how to strike a balance between. I want him to be strong, yet sensitive. Love deeply and not be afraid to show affection but also to know the importance of consent. I want him to maintain the sense of wonder and enthusiasm that he brings to everything he does and to keep on dancing, even if it's always out of sync.