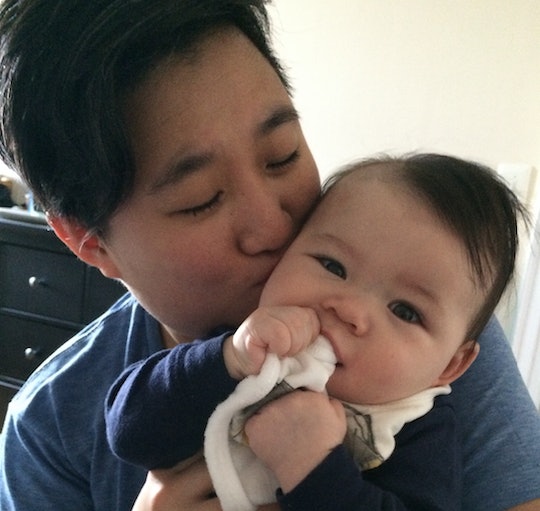 I Am My Baby's Mother, Even Though I Didn't Give Birth To Her

Days after finding out that my wife was pregnant, we were still flying high, as elated as two parents who had been trying to conceive for a long time could be when, in the middle of our joy, someone close to us asked me point-blank if I was going to have to adopt our baby. Just like that, my happy little bubble burst and I tumbled back into the harsh reality that for as much as I had been a part of the process to conceive our child (I never missed a single reproductive endocrinologist appointment and I was the one who injected every needle into my brave wife's body), our baby was, in fact, still not my child. She would not have my eyes or ears or my fingers or toes. And, even though we chose a Korean donor so that our baby would have some physical representation of both of us, we would not be related by blood. While I know this person didn't mean any harm by her comment, it raised an insecurity I had had since we started trying: How would I fit in as this child's mother when she already had one?

If anyone should understand not being biologically related to their parents, it's me. Adopted as an infant, love has only ever meant so much more than blood to me. To know me and to also know my parents is to truly understand how one can mirror the other even when our images don't. Which is why it's been such a surprise that I've found myself feeling this insecurity. I know better than most that love is all that's needed to make a family, and, yet sometimes I find myself feeling like an imposter in my own.

I live with the gnawing feeling that what our daughter will remember most is the loving and warm embrace of her other mom, and that I will just be this blurry figure that whisked past her as she was being fed, darting from one chore to the next.

When I see my wife sitting cross-legged on our bed, our daughter in her lap happily breastfeeding, I can't help but feel a twinge of jealousy. It's an experience I will likely never have as I am well past the other side of 35 and am also contending with health issues that prohibit me from getting pregnant. If I'm being totally honest, for as little importance as biology has to me, there is a small part of me that has always wanted to look at someone and see myself looking back at me. And now that I know how peaceful and loving the act of breastfeeding your child can be, a part of me so desperately longs to experience this profound connection. I'd be lying if I said I was never tempted to see if she'd take my nipple, but I can't process the heartbreak that would come with knowing for certain that she can't.

Sure, I have fed my daughter by bottle, but there is a stark difference in how she reacts to one versus the other, and I so badly ache to know what it feels like, to know what it's like to not only be our daughter's sole source of sustenance, but also her greatest source of security and comfort.

Last year, in preparation for my pending parenthood, my own dad took it upon himself to wish me a Happy Father's Day, and didn't understand why I burst into tears in response.

Instead, while my wife feeds her, I try and contribute in other ways: I fold and put away the stroller, I hang up her coat, I dust, I vacuum, I clean, I walk the dogs, I do the dishes, I sanitize everything she touches, I do the laundry, I get the stains out of her clothes, I take the trash out, I restock her daycare bag, I wash the multitude of bottle parts and pieces that she takes to daycare and that my wife uses to pump, I research what products we should get, I fill out her paperwork and applications, and I make last-minute runs to the store.

That's not to say my wife doesn't also do these things, but I find myself simultaneously clinging desperately to this laundry list in order to prove that I'm an equal parent, while also resenting these menial yet necessary tasks for taking me away from her, for making me less present. I live with the gnawing feeling that what our daughter will remember most is the loving and warm embrace of her other mom, and that I will just be this blurry figure that whisked past her as she was being fed, darting from one chore to the next.

When our daughter was 4 months old, we met a lesbian who didn't have children despite the fact that she'd tried for many, many years. She asked if my wife was breastfeeding, and we told her she was. Then she turned to me and said, "So I guess that means the baby doesn't need you much, huh?"

She may as well have reached through my chest and ripped out my heart, especially because it came from someone I had hoped would understand the parenting limbo I was so uncomfortably sitting in. Had I not just minutes ago carried our daughter in her stroller up and down subway station stairs by myself? Had I not been proving from day one, day in and day out in various ways, that I deserved to be considered and seen as just as much a mother? Before I could reply, my wife spoke up: "Actually, she needs both of us," she said, her voice unwavering. Admittedly, she was far more certain than I had been up until that point.

Before our baby was born we received onesies that said, "I love my mom," and I couldn't help but wonder: which one?

Early on especially I struggled so much to find my place in my daughter's world and our new normal. I would look at dads and envy their confidence in their de facto secondary role. Did their confidence stem from simply being biologically related to their children so, therefore, they could accept their role without feeling the need to have to prove themselves? Or, was it deeper?

It's hard to argue that, at great disservice to all of the amazing dads out there, society expects less from fathers. How many working dads do you know who wonder if they can have both their career and their family? How many parenting articles are written with the father in mind? We are overjoyed and perhaps even sadly surprised when men are good, present fathers, but the overwhelming expectation is that women should naturally be great mothers, and we are so laden with guilt when we don't feel like we are living up to that and all that that entails.

So, what does it say when, even though I'm a woman, people are hell-bent on pigeonholing me as a father? My rheumatologist, who has examined me every eight weeks for three years now and who knows that I unequivocally identify as a woman, actually asked me after our girl was born, how it "felt to be a dad."

When I filled out our birth certificate in the hospital, we were told to include a copy of our marriage license since we are a gay couple. I deftly marked the "second parent" box, as opposed to the "father/male" box below my name, and, still, even with extra documentation and clear marking, our baby's birth certificate listed me as her father.

Last year, in preparation for my pending parenthood, my own dad took it upon himself to wish me a Happy Father's Day, and didn't understand why I burst into tears in response.

If societal expectations rank fathers below mothers, then second mothers rank somewhere way below that. We aren't often even seen as our own gender because it's so hard to compute that having two parents does not have to mean a mother and a father. As a result, I rarely feel as though I register at all.

Before our baby was born we received onesies that said, "I love my mom," and I couldn't help but wonder: which one? While it could be argued by the most well-intentioned that it's meant to represent either, you don't see items that say the singular, "I love my parent." When there are two of the same title, to only mention one is exclusionary. Even on our daughter's clothing, I'd be fighting for equal recognition.

As I told my wife, I sometimes feel like the oat pieces in a box of Lucky Charms. Sure, they round out your bowl, but they're boring and ultimately they're not marshmallows. And, let's be real, the cereal isn't called Lucky Oats. But then, surprisingly, she told me that's how she feels sometimes because she finds her role to be utilitarian, especially since she's often being "milked" by either our daughter or a pump. That's when I realized that she and I are simply different sides of the same coin, and no matter what side lands up, our girl is always going to win because in the end, she has two parents who love her and want nothing more than to be everything she needs.

I still feel like an imposter sometimes, the thankfully smaller but still ever present insecurity breaking the surface when someone inevitably says something out of ignorance. It still feels surreal when someone asks if the picture on my desk is my daughter. And, the reality is that, just to be on the safe side, I'll likely still have to adopt our baby, even though I've been there every step of the way, waiting for her since before she even actually existed. I'm forging my own path for the role I've wanted for so long, but no matter what happens, no matter what legal documents say, or what other people refer to me as, nothing will make my role more of a reality than when our daughter one day reaches out her tiny hands towards me, wraps her little arms around my neck, and calls me Mommy.