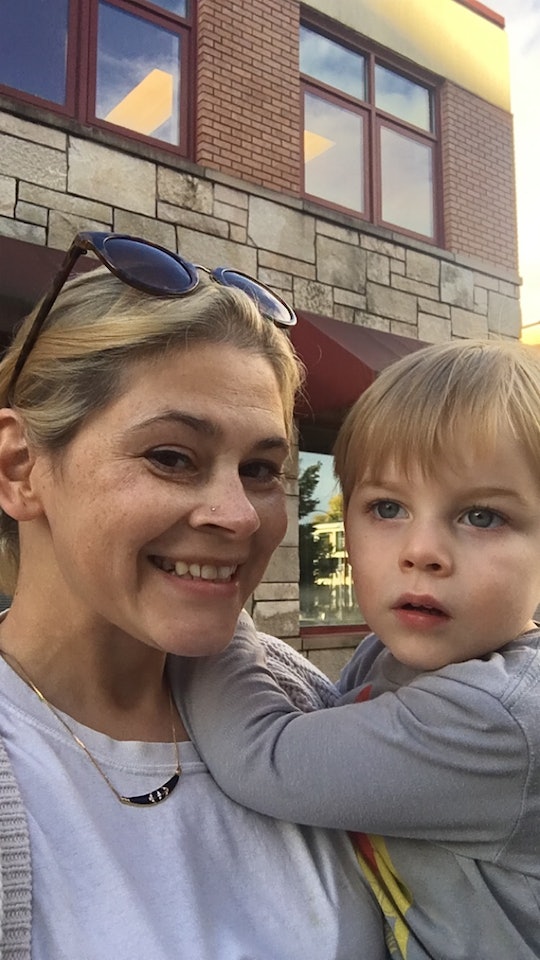 I Am That Mom, Breaking All The Rules You Fearfully Obey

Let me start out by saying that in general, I am a rule follower. I have never been to jail; I have never even been arrested. You could even say I like rules, because they help me know how to behave in a given situation. They are like a tiny playbook for life. But I also love to break rules. When I come across rules that make no damn sense, I break them joyously. I understand that society must have the rule of law, but I also believe that asking me to wear socks in a Pilates class is an unnecessary vanity, given we will spent 15 minutes targeting our inner thighs with extreme kinesthetic detail. I believe the McDonald's PlayPlace is there for me whether I bought a Happy Meal today or last week. I am that mom, whose kids you see riding their bicycles down the aisles of Target.

Mid-winter, I took my son and our dog to the pet store. I figured the dog would get to sniff on some other canines and my son would be happy to see all the parading pets, so I packed them in the car and headed out. There is a grooming area in the back — huge glass windows splay out horizontally so you can see the dogs whose parents have left them in the care of total strangers to significantly alter their appearance. The problem with the viewing area was that it was for adult-sized people to see through, like most of the rest of the world is. There were no viewing panes near the floor, where my son was.

For him to see the glorious display of little beasts being ravaged by clippers, I'd have to hold him. But holding a toddler can be hard, especially when you’re also holding a leash. I saw a massive display of dog beds piled high, so I walked over and placed my baby atop them. Then we settled in for the Grooming Show.

I wondered if someone would come by and admonish me. I wasn't necessarily doing anything "wrong," but I was doing something that seemed odd — manipulating the store display for my kid's own personal use. But no one came by to yell at us; my little dude sat comfortably on some plush dog beds while quietly observing.

Was it wrong when I let him walk up and down the ski ball lanes at a local children’s play center? Or when I put him on top of an arcade game so he could see the action? Maybe. Maybe. Because other children could witness our act and then think it OK. I get that it would not be good to have masses of children climbing high and throwing their bodies down ski ball lanes like slides. I mean, I get it. I made sure there were no children around when I boosted him up, and I quickly stopped the photo shoot when I heard them approaching. But then again, had I been reproached, I can practically hear my response. Who are we hurting?? Who????!

I don't want my child to worry that he is always doing something 'wrong,' like I did so much when I was young.

The truth is, I love to challenge society's ideas of what we should be doing and shouldn’t be doing. I love to publicly challenge ideas in different social circles — those that run amok in my family, and those amongst my personal group of friends. I also love to have my own ideas challenged. I may get defensive at first, or flat out deny that you have a point, but once someone introduces a way of thinking to me that is outside my own, it takes root in me. It resurfaces when the argument comes back up in my mind, and I consider it. I consider a different way of thinking. Which is the only path to growing.

I have seen other moms look at me questionably. I come off like I don't give a f$%@, but the truth is I care very much. I care about living a life that isn't concentrated around fear and other people's ideas of us. I don't want my child to worry that he is always doing something "wrong," like I did so much when I was young. I want him to feel free. Freedom, of course, can appear threatening. If I'm letting my kid do whatever the hell he wants, it affects the mom next to me who may be trying to restrain her child a bit — and let me be clear — I do know there is a time for that.

It should be noted that I pull this same sh*t at home: acting outside of what seems the correct course of action. “Don’t give him a pen,” my husband says 10 times a day, Yet I hand our son one every time he puts his palm out. “Please don’t let him play with water," he'll say, but just last week, I gave him three pans filled with water and chickpeas, and wow, did he make a mess. It’s just — I have always been so scared of not living. I have always been attracted to those labeled as eccentric. You can always pick up on those that march to the beat of their own drum — either by the way they dress, the way they speak, or the habits they employ.

I started out in life rather quiet, always scared to upset my parents. But once I saw how big some people’s lives were, and how "crazy" and "kooky" and happy they seemed, I was determined to join their ranks. I vowed to listen to my inner voice and all its whims, so long as I did not hurt another soul in the process. And so I have come to parent like this.

I do think I will have to reign in my behavior in order to respect the establishments I'm often in, in order to honor my husband’s wishes and select valid opinions.

And as my child gets older, I’m going to have to hold back for him, too. He needs to have the groundwork for respect. And while it pains me to realize how things will change as he ages, I don't want to embarrass him. I don't want him to feel self-conscious about his free-spirited mom. So instead of teaching him that rules are flexible, I'll teach him to think:Why do you think they made this rule? Could it end up harming someone if we didn't follow it?

I'll teach him to think, and to always question power, but to be respectful in the process. I may have to act a little ~cooler~ in public, but we're going to be allowed to have a lot of fun at home.