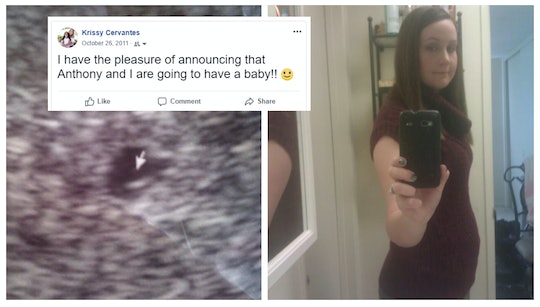 I Announced My Pregnancy At 6 Weeks, & No It Wasn't "Too Early"

I remember hitting the send button with butterflies in my stomach. I was excited, yet unsure of how people would react. I mean, my husband and I just got married three months prior and this was most certainly not planned. I remember calling my mom first. She didn't answer, so I called my dad. We cried on the phone together. The entire morning felt so surreal, and I hadn't even started work that day yet. I was having a baby. And I was announcing at just six weeks pregnant.

To my surprise, my Facebook page was filling up with congrats messages. I cringed as I clicked the notification button to see what people would say.

"Didn't you guys just get married?! Why not enjoy it?"

We did enjoy marriage. For three months total, which I guess was all we needed since we had already been together for a few years. What difference does a piece of paper make between two consenting adults?

In the back of my mind, I knew the more responsible thing to do was wait until I was about 12 weeks along to announce that I was pregnant. The biggest reason being I could have a miscarriage, and be left completely devastated and tasked with explaining to everyone why I wasn't pregnant anymore.

But I didn't want to hide behind the miscarriage taboo. My excitement overtook the risk of announcing too soon.

I actually found out that announcing my pregnancy early had a few benefits.

I hated the beginning of my pregnancy. I got so sick that I couldn't even keep water down. My husband had to give me medicine in an unconventional way, which I still couldn't keep down. I wouldn't wish the way I felt on my worst enemy. I was vomiting non-stop. I lost weight and felt miserable.

But since I announced my pregnancy, I didn't feel like I was keeping a secret and lying to friends and family about why I was so sick. I was able to get support and feel that I could express myself more openly about the pregnancy process.

My friends and family let me know that they would be there for me. They would check in on me and offer help. To know that I had support at an extremely vulnerable time made being pregnant a little easier.

And in my rush to announce my pregnancy, my official announcement to my friends and family ended up being simple but still memorable.

Nowadays, pregnancy announcements are typically a cute Instagram photo with mommy, daddy and baby shoes. I just put a Facebook status. And I don't regret not having a creative way to tell my friends and family.

I found out I was pregnant on the day of my brother's birthday (makes it easy to remember). My family was going to have dinner that night and I thought what better present than to tell my brother he was going to be an uncle. My brother told my husband and I that what he wanted for Christmas was a niece or nephew so it worked out perfectly.

That night, when my brother read his card out loud, I felt happy with my decision to let my family know that I was pregnant right away. There were tears, laughter and shock. My husband and I had just gotten married and having a kid was not something we were planning on at the time.

Shortly after I announced on Facebook, I posted a picture of my first ultrasound. My friends and family got to see the tiny miracle growing inside me.

During the morning, noon and night, I would look at my ultrasound, with a tiny little white oblong shape.

"This is my child," I told myself with pride.

I was in awe of what was growing inside me. It was so small, but already had such an immense impact on my life and heart.

Although I announced my pregnancy at six weeks — a decision that is often met with unease — I was embraced with love and support from my friends and family. I took a chance and was prepared to deal with whatever came at me during my pregnancy, including the unthinkable.

But everyone has a different situation. Some people have their own personal reasons for waiting it out. It's really no one's business. If someone decides to share the news, just be supportive and ready to embrace the journey this mother is about to go through.

I ended up having a difficult pregnancy. I had extreme morning sickness and my daughter was born prematurely. The support and love I received from my friends and family truly carried me through the process. I was constantly asked how I was feeling and offered all kinds of help.

Just knowing I wasn't alone eased my fears from being pregnant. I was afraid of having a miscarriage; at one point, when I was about 20 or so weeks I thought that was happening and thankfully it was not. I was afraid of becoming a mom. I was not mentally, physically and financially prepared.

We live in a different time when there are no rules on when it is best to officially announce a pregnancy. If a woman wants to announce at six weeks or nine months, then so be it. There is no magical number. Each pregnancy is unpredictable. For me, six weeks was all my excitement could handle.

More Like This
All Your Questions About Getting Pregnant After A Tummy Tuck Answered
A C-Section Actually Doesn't Take As Long As You Think, According To Experts
Infertility As A Stepmom Means Double The Alienation, But So Much Love
Adult Gymnastics Brought Me Back To Myself