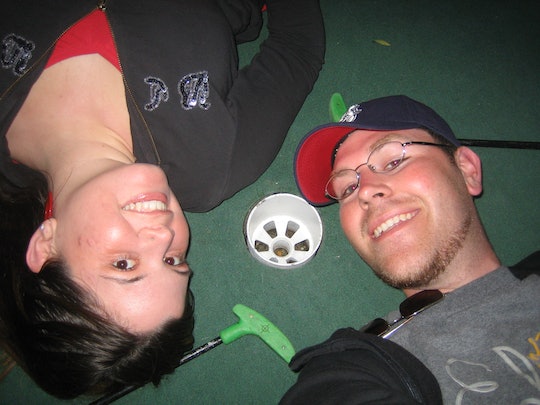 Why I Compete With My Husband In Front Of Our Kids

I don't back down from an argument — like, ever. A logical point the size of a train could be hurtling towards me, and I'd get flattened before I stepped out of the way without an argument. It's just who I am. In fact, when I recently took an online personality quiz that determines which of 16 personality types you have, I received "Debater."

My goal is not to troll people, or fight for the sake of fighting. But if someone has an opinion I feel is inaccurate and pushes me to concede their point, I'm compelled to challenge that opinion.

In addition to debating, I'm competitive about almost everything: who's better at a game, who's funnier, who bakes better cookies. My husband is a lot like me. He also doesn't back down from arguments and we come at each other like two trains going full speed.

As the parents of two young kids, our children are often standing on the figurative tracks between us. But I believe that it isn't harmful to my kids for them to see their parents argue with each other. In fact, it could even be beneficial.

I am competitive with my husband in front of my kids for several reasons. I want my kids to see that competition is healthy, and that it encourages us to push ourselves to do better and be better. Additionally, I believe kids can learn about the reality of marital relationships through watching their parents disagree and then work out that disagreement. I want to serve as an example of a strong and confident woman who stands up for herself and knows her own worth.

I believe that by seeing my husband and I work through our disagreements, our children will learn how to defend their own beliefs.

I also want to show my kids that it's OK to lose. Our culture has become so obsessed with tip-toeing around kids' feelings and giving everyone a medal, and while I agree that it's important to instill confidence in kids, a number of parenting experts say that it's healthy for kids to compete. That's because competition teaches kids that people who are the best at a given task aren't always rewarded; rather, rewards usually come to those who stick with tasks and work hard. Competition also helps kids learn how to deal with disappointments later in life.

Our family loves to play board games together, and my husband and I relish engaging in good-natured trash talk with each other over a rousing game of Life. My 5-year-old son also likes to "trash talk", and sometimes he loses his temper when he doesn't win a game. We use these opportunities to explain that it's OK to want to win and to try hard to win, but poor sportsmanship is not acceptable. We want him to know there's a difference between gentle teasing when your competitor is on board with it, and being mean or losing your cool.

I hope that my kids will grow up confident and empowered to not only defend themselves, but also those they care about.

I believe that by seeing my husband and I work through our disagreements, our children will learn how to defend their own beliefs, and that disagreement is OK in healthy relationships. I'd rather my kids be vocal in their future relationships than risk being taken advantage of or otherwise victimized. I want to be an example for my daughter in particular. I want her to grow up to be someone who stands her ground, whether with strangers or with a romantic partner.

Still, there is a line. If my husband and I ever lose our tempers and yell at each other or curse (which does occasionally happen), we know that we have done our children a disservice. In these instances, an apology is necessary — not only to each other, but to our kids.

We also don't want to prompt our children to choose sides. More times than I can count, my son has called out, "I'm on Daddy's team!" or "Mommy's right!" We need to avoid the temptation to encourage this siding, because a child shouldn't have to choose a parent, even in a friendly debate. But when this happens, we usually remind our son that "we're all on the same team", and the issue is resolved.

I hope that my kids will grow up confident and empowered to not only defend themselves, but also those they care about. And, of course, to plain old enjoy the fun of good competition.

Because that's a cause worth arguing for.