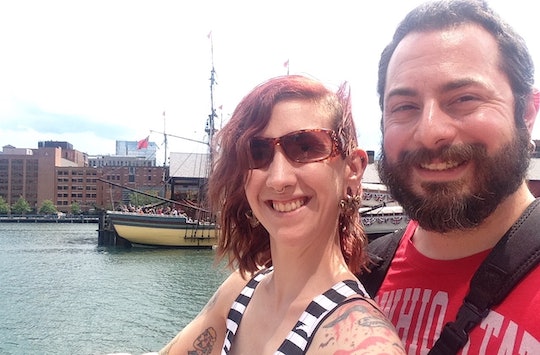 I’m not much of a “go-getter” in the bedroom. I tend to take little initiative and sort of lay back and see how things unfold. (Pun intended.) I love sex, don't get me wrong. I also love foreplay, light bondage, and vibrators, but I’ve just never been the type of woman who screams for what she wants in the bedroom. I like the game. I like the chase. But I don’t like to ask for what I want. In fact, asking for what I want in bed makes me really uncomfortable and anxious and nervous. There are times I wish I were more assertive, times when I wish I could ask my husband to make me orgasm — now! — or tell him that if he doesn’t come to bed ASAP I am just going to take care of myself. And I know my husband would welcome the change, but in the heat of the moment, I rarely know what to say, or even how to say it. It's hard to articulate what turns me on.

If you know me, you know I’m pretty relaxed (read: pretty indecisive). I’m the kind of person who can't figure what to watch on Netflix each night; kind of person who can't decide what to eat for dinner. How was I going to be “in tune” with myself to learn what I wanted? To know what I wanted? And how was I then going to find the courage and the words to share these thoughts and feelings with my husband? And after stressing, fretting, and procrastinating, I decided the only way to learn and to know was to start. So naturally, I dove right in.

At face value, this experiment may seem easy: all I had todo was be open and honest with my spouse about what I wanted in bed. Easy as that, right? Wrong. The reality of this experiment was incredibly different than what I expected. Not only did I have to be more sexually aggressive than I am comfortable with, in order to tell my husband what I wanted I had to think about what I wanted in that moment. I had to be tuned in and turned on. I had to consider what I like, what I don’t like, and I needed to be vocal about expressing both in the bedroom.

But more than anything, I had to know what turned me on... and they I had to find the words to express those desires. I don't know why it's so hard for me to be so forthcoming about the things that I want — I also don't know why telling someone I love and trust what I want and need in the throes of passion was intimidating — but it turns out that this experiment was harder than I ever thought it'd be.

This may seem asking to have sex was an innocuous way to start this experiment, but the truth is that I rarely ask for sex. I may initiate it with a playful spank or sexual leg rub, but I scarcely say anything. I just let things happen. But since I had to start this experiment somewhere, I figured where better to begin than with the basics?

When my husband came home, I set the mood and put on a pair of my sexy underwear and a little makeup. I even made the bed. I teased him with a cheeky as grab here, and a semi-vulgar gesture there, but when the time came to speak, I froze. I didn’t know what to say. I realized that my main problem with asking for sex is in the language. Asking my husband if he wanted to "bone" sounded so cheesy in my head, but asking outright if he wanted to "have sex" felt too sterile. When I thought about asking if he'd want to "screw" or "f*ck," it just felt way too vulgar and intense for me. Plus, those just aren't things I say.

That's when I realized that maybe I don't have a good, sensual way to initiate sex with my partner, or to even let him know that I'm in the mood.

Eventually I settled on the more sterile approach, though I did “try” to do it in a breathy, pseudo-sexy voice. (Though try very much remains the operative word.) My husband was receptive and we had a great night, but I still felt awkward and self-conscious afterward. I felt uncomfortable. And whether it was the act of asking for sex itself or what I said, I wasn’t sure. Either way, something about day one made me, and the encounter, feel inauthentic. And I didn't like that feeling.

Enter day two. Since day one ended on a good, but awkward, note, I knew day two would be no easier, but I still had to try. I had to push myself outside of my comfort zone, and so I decided that meant trying out the opposite end of the spectrum. On day two I didn't just ask my husband to "f*ck me," I demanded it. (And yes, I did use that exact language.)

To say I was nervous would be an understatement. I was terrified. I mean, I wasn’t afraid my husband would say no, and I wasn't worried he'd laugh at me or make fun of me, but I was afraid I wouldn’t be "good" at asking for what I wanted from him. I also worried I wouldn't be articulate enough, for some reason, because I don’t exactly have much of a dirty-talk vocabulary. I was afraid my husband would be disappointed with the not-so-sexy sex kitten he saw before him. But we were already making out and messing around, so I decided to say it. And out tumbled the words.

And you know what? It wasn’t awful. It wasn’t terrible and — in fact — it led to some pretty killer sex. (I think part of that was because my husband was more turned on by my behavior than I was.) I was still self-conscious because the words weren’t min and again, the felt so ... stereotypical. But does that mean they weren't fun? No. I was turned on by my newfound dominance too, but my own insecurities held me back. My own trepidations kept me from turning up the volume and having a good time.

I usually approach the “How do you want it?” question pretty cautiously. I mean, what sort of question is that? I want to have sex. Do the particulars really matter? Well, sometimes. Because even though sometimes I just really want to get it on, sometimes I want more than just that. There are times when, in the heat of the moment, I want particular type of stimulation. Rarely do I ask for it, though. But in my quest for sexual empowerment, when the “how do you want it” question arose this week, I blurted out, "Do me doggy." (In my head I said it in a drop-dead gorgeous and totally sexual way.)

In any case, this was undoubtedly the easiest things to ask for because it is common and easy. Plus, on some level, I felt like my partner already knew it was coming because it's one of my favorite positions.

I’ve got to be honest with you: I’ve never had too many sexual fantasies. The idea of role playing seems absurd (I am far too self-conscious to play make believe in the bedroom). Threesomes seem like they could be fun, except worry that I'd be jealous or uncomfortable. And swinging is not for me. But bondage has always excited me — at least in theory. There's something intriguing about surrendering control, and something provocative about giving up power to be restricted and restrained. And those same parts that thrill and excite me also terrify me.

My husband and I have played with cuffs and blindfolds before, so I figured what the hell and asked him to tie me up.

To say the experience was amazing would be an understatement: It was mind-blowing. Not only was the act itself entirely enjoyable, asking for it, and not worrying what my husband thought, or what I thought, make the whole damn thing phenomenal. Mentally, I felt better. Physically, I was great. I lived in the moment, and I had a few great orgasms to boot!

Needing A Night Off

No matter how great sex with my husband may be, sometimes I need a break. Sometimes life requires my attention and I just need a night off. This was especially true during this experiment where I'd pushed body (physically, mentally, and emotionally) beyond its comfort zone.

Part of asking for what I wanted in bed is asking for what I don’t want, and instead of feigning a headache, nausea, or sheer exhaustion, I told my husband I didn’t feel up to having sex that night. It was scary to admit that, but instead of making my husband angry, it made him empathetic. He asked what was wrong and if I wanted to talk. He asked if there was anything he could do. And that felt amazing because there is nothing more intimate, to me, than a good — and honest — conversation. There is more affectionate then being held, and hugged. There is nothing sexier than being hear. And while we didn't have sex, I felt cherished and special. I felt loved.

Needing To Be Alone

Much like the previous day, the final day of this experiment was riddled with angst and stress, and sex couldn't have been further from my mind. But unlike the previous night, this evening I wanted to be completely alone. I wanted to have a few beers, watch Amy Schumer, and not worry about anyone else. The good news (for me) was that I didn't have to say much because my husband was out until 9 p.m., but that bad news was I didn't have to say much. I felt like I'd sorta failed the final day of this experiment much to my disappointment.

After a week of asking for what I wanted in bed, I found being assertive wasn't as difficult as I originally thought it'd be. In fact, in many cases it felt good! I felt good because I felt empowered. However, during the duration of this experiment I also learned how very out of touch I am with my wants and needs. Even though I love sex when we have it, asking for it is still strange not because of the words themselves, but because of the question. I do not know how to ask for anything in life: as a wife, as a mother, and as a writer/employee. The very idea of asking for things goes against my nature. It makes me feel weak and vulnerable, and it intimidates the crap out of me. And, when it comes to the bedroom it is doubly difficult for me because even though I can be a "freak," I am also fairly quiet. And I'm not really into any of the "kinky stuff" either. I don't have any sexual fantasies that would shock my husband, which, I feel, made my requests rather boring and blah.

That said, will I implement my newfound assertiveness on a daily basis? Maybe, but probably not. It's still really intimidating. Going forward however, I definitely am going to try to be a bit more decisive and a bit more strong-willed and confident. And I definitely will make it a point to pay attention to myself by learning my desires and wants and needs.