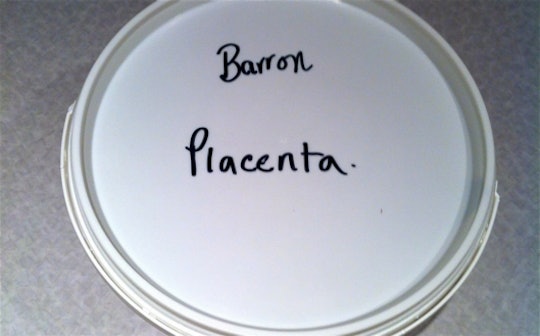 I Ate My Own Placenta, Because That’s What Everyone's Doing Now, Right?

I’ll admit that when I was deciding whether or not to eat my placenta, I didn’t do a whole lot of research. After six consecutive years of college, my capacity for research doesn’t typically go much further than the first page of Google. Before my own pregnancy, I had no concept of the sheer amount of work a body goes through in order to sustain another life. I mean, in addition to a person, you grow a whole new organ.

Because I’d spent the majority of my own pregnancy sick and exhausted, I was determined not to let any of my body’s efforts over the past 10 months go to waste. I’d never consider throwing my baby in the trash, and I thought I’d might as well give my placenta the same consideration. Gaby Hoffman puréed hers with guava juice. Kim Zolciak also went the smoothie route, and gently encouraged her husband to try some, too. I knew I didn’t want to use it as a pizza topping. I also knew that, being as I live with my parents, keeping raw hunks of placenta in the freezer next to the peas might not fly. Then I came across this photo from Soulflower Mama, one of the many beautifully curated Instagram feeds I periodically lurk:

I thought, as I often do: Yeah! I could do that! I could swallow a pill! I could have a beautifully curated Instagram!

My mom is an herbalist, and we’re into some pretty deep hippie shit. But even she was taken aback when I told her I wanted to cook my placenta, grind it up, and make pills out of it. “But, why?” she asked. “What does it do?”

“It’s good for you,” I said, sagely, despite having no idea what I was talking about.

A quick Google search of “why should I eat my placenta?” turns up some pretty divisive results. Proponents claim that eating the placenta has multiple benefits, including preventing postpartum depression. Some moms report feeling a kind of “high,” or a buzz, after consuming their placenta. Detractors claim that, at best, eating the placenta doesn’t do anything. At worst, it can make you feel like total crap balls.

When I broached the subject with my doctor, she was all for it. She didn’t ask me why I wanted to consume my placenta, which seems strange in retrospect. She just gave me a big thumbs up and said she’d make sure I got to take it home after baby had been delivered.

My mind was made up: I was going to encapsulate my placenta, stick it in a Mason Jar, and post the shit out of it on my Instagram. So I hopped on Amazon and ordered an encapsulating machine and some capsules (vegan capsules, ironically). All I had to do was wait for the blessed day that I’d squeeze the baby out, miraculous mommy medicine in tow.

My labor and delivery ended up going about as far from what I was expecting as possible. After many hours, I ended up having a C-section. I’d honestly completely forgotten about my placenta and would’ve gladly tossed it directly into Satan’s gaping maw if it would have helped end the ordeal any faster, but my doctor remembered, and when I finally got home from the hospital, my mom cheerily informed me that my placenta was in the freezer. My dad had taken it home from the hospital in a white bucket marked, “BARRON PLACENTA,” and I would’ve laughed at the idea of my 76-year-old father carrying my placenta home in a bucket if my whole torso hadn’t been aching.

It sat around for a couple weeks before I had the energy to do anything with it. My mom said she would encapsulate it for me, but she wasn’t so stoked on the preparation part, and I didn’t blame her. The first step involves cooking the placenta. On the stove. With fire. I ended up steaming it in the pot we use to cook our leafy greens. Because I’m pretty interested in medical stuff and not easily grossed out, chopping up one of my own organs and cooking it was actually a pretty cool experience. The smell was probably the hardest part. It was like nothing I’ve ever smelled before; sort of gamey, like partridge or venison.

After its wild ride in the veggie steamer, I popped it into the oven on low heat to dry out it out. Then into the spice grinder it went.

Visitors during that time ran the gamut from restrained, but obviously disgusted to open, retching-noise disgust at my decision to eat placenta. I told myself that they were just close-minded. I had to be smug or else I would lose my resolve. As it turns out, there’s a learning curve to using a pill encapsulating machine. My mom spent days hunched over the dining room table, lovingly scooping my powdered guts into their little shells. (A mother’s love knows no bounds, guys! Even when you’re an adult!)

When she was finally done, I had my very own Mason Jar full of pills, just as I’d envisioned. I was feeling run down, to say the least, and I was pretty excited to experience the purported “placenta high.” Before I could take the first pill, I had to do some mental yoga to get around the taste experience of burping up one of those things. I read that you’re supposed to take six pills per day, but they gave me such violent, human-flavored burps that I wasn’t clamoring to go back for more after the first dose.

It was hard to tell if they were doing anything. I’d gone through so much -- a pregnancy, labor, delivery, and postpartum experience -- and I was so tired and in so much pain that even if they had been super effective, I doubt I would’ve noticed in those first few weeks. Of course, because I’d embarked on this experiment with no prior knowledge of what I was doing and with  no way of knowing whether I had done it “right,” it crossed my mind that human error might’ve played a role in my lack of placenta-induced euphoria. We can’t all be Kourtney Kardashian, OK?

But as I started to feel more like a human being again, I became pretty convinced that my magical mommy medicine wasn’t doing a damn thing. I’d certainly never experienced any kind of “high” or burst of energy. And after six weeks, my iron levels were still in my boots, and my doctor ended up prescribing me an supplement.

All in all, I took the placenta pills for about three months before quietly emptying my sought-after Mason Jar into the compost bin.

And after all that, I didn’t Instagram a damn thing, either.

More Like This
The 21 Most Popular Baby Names Of 2021 In The U.S.
24 Beautiful Baby Names With The Same Vibe As Mila
18 Baby Names To Use If You Like The Name Evelyn
These Darling Baby Boy Names All Start With The Letter "D"