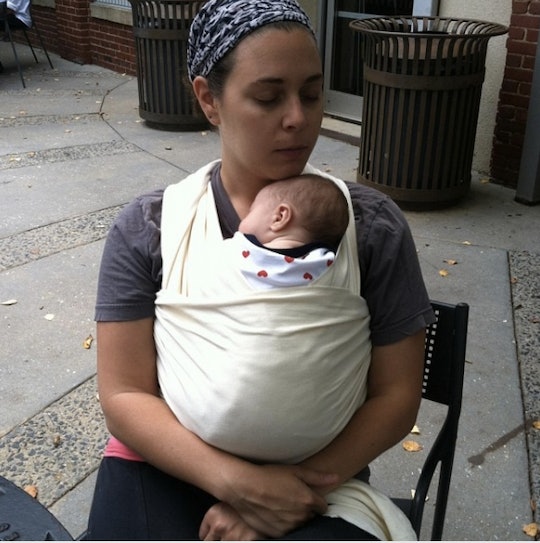 Yup, I Ate My Own Placenta

After I had my second baby, I decided that I would eat my placenta. Before you gag up your latte, I promise, it's not nearly as gross as it sounds: I had my placenta encapsulated, or dried out, ground up, and turned into pills. The whole process was pretty quick and easy: after I gave birth at home, my midwives simply carted off the placenta with them, then returned two days later with a bottle of pinkish-purple pills and instructions for taking them.

I was interested in eating my placenta primarily because I hoped that it would help ward off postpartum depression. I’d suffered long and hard with anxiety and depression while pregnant with my first baby. Now that I was going to have another baby, it seemed like it'd be a good idea to take preventive measures. I'd heard that eating your encapsulated placenta helped alleviate the symptoms of PPD, but I had no idea if it would actually help at all. I was fully prepared to seek other options if need be, like therapy or even prescription drugs. I just figured it was worth a try.

Months before I delivered, I started reading about placenta encapsulation. Online, on blogs, parenting sites, and in the news, there were countless reports of women who’d suffered postpartum depression or anxiety once, but said they didn’t struggle so much after consuming their placentas on their next go-round. Some woman said it helped their milk come in or helped ease their physical pain postpartum, too. Though I did read a few personal accounts of moms breaking out in rashes after ingesting the pills,I didn't find anyone who said it had negative effects. Most of what I found on placentophagy (the term for the practice of ingesting your placenta) was overwhelmingly positive.

There is a possibility that the perceived health benefits of ingesting placenta can be attributed solely to the placebo effect.

While there were tons of first-hand accounts from women who ate their placentas, however, the real research on placentophagy was limited. I couldn’t find much evidence that there was a direct correlation between consuming your placenta and preventing PPD. In fact, there have been few studies on the practice of placentophagy at all. There is some evidence that placenta is high in iron and contains fat and protein, as well as stress-relieving hormones, and one study in the journal Ecology, Food and Nutrition surveyed 189 women who consumed their placentas, 76% of whom said they had "very positive experiences." But the study had a small sample size and no control group, so in the absence of a scientific consensus on the subject, it's certainly possible that the perceived health benefits of ingesting placenta can be attributed solely to the placebo effect.

Once I got the pills, I followed the directions carefully. I was told to take multiple pills a few times a day at first, then fewer, and fewer. Eventually, I just took them occasionally, only when I was feeling out of sorts or needed an energy boost.

The first few days after I gave birth, the pills actually seemed to be exactly what I needed. I felt more emotionally balanced than I did after my first baby, and I definitely had more energy. Even though I wasn’t getting much sleep, I felt more focused than I had remembered feeling after my first birth. On one occasion, when I started to feel really off, I was rocking the baby and crying for no reason at all. Then I remembered that I’d forgotten to take my placenta pills. About a half an hour after taking them, I started to feel much more leveled out.

That said, I have no way of knowing whether my experience can be attributed purely to the placebo effect. Still, I’m a pretty big believer in the idea of looking to nature to solve the body's problems in general. Additionally, the practice of placentophagy is hardly new. Many mammals ingest their own placenta, and throughout history mothers in African and Chinese cultures have done so as well, for various health and spiritual reasons.

Of course, my great mood didn't last forever, and I realized that the hard work of mothering two kids had only just begun. But I do credit my positive postpartum experience to eating my placenta, at least in part. While I think that it helped me, mothers shouldn’t assume placenta pills are a cure-all, though. According to the Centers for Disease Control, somewhere between 11 and 20% of new mothers each year suffer from PMADS (postpartum mood and anxiety disorders). Placentophagy i’s far from a one-size-fits-all remedy, and shouldn’t be treated as such. Postpartum mental health conditions can be serious and natural remedies are not always going to help; in most cases, it's preferable to seek professional help.

I’m happy to vouch for placenta consumption any old day, and I’d do it again if given the opportunity.

Still, when it comes to getting a good old-fashioned mood lift, I’m happy to vouch for placenta consumption any old day, and I’d do it again if given the opportunity. Even if it just had a placebo effect on me, it totally helped me adjust to life as a mother of two in the weeks after having my baby. I found it kind of amazing to use something my own body had made, rather than throwing it out with the trash. The jury is still out on whether or not placenta has true health benefits, but there’s no denying that our bodies can do some incredible things.

If you struggle with postpartum depression or anxiety, seek professional help or call Postpartum Support International at 1.800.944.4773.