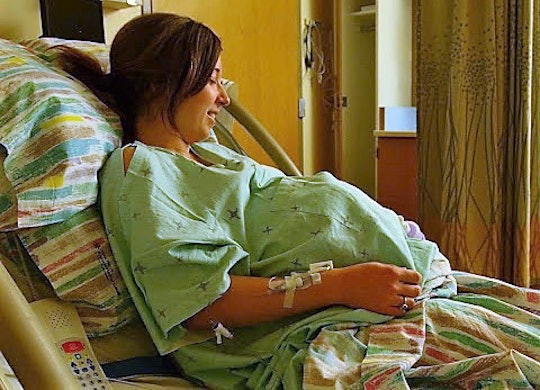 When I neared the end of my third pregnancy, I started becoming desperate for a “natural” way to induce labor. Every time I went into the hospital for my check-ups, the nurses commented on how big I was — and how big my baby was going to be. With the unwelcome reminders that if I stayed pregnant any longer, I was going to have to push a tiny linebacker out of my vagina, labor couldn’t come soon enough. Plus my back was aching, and it had been almost 40 weeks. I was ready to be done. Thus I tried nearly every natural labor inducing myth under the sun, until finally I tried the one junk food that actually induced labor, or sure seemed to.

At my 39.5 week checkup, I rattled off all the natural labor inducing techniques I had tried, which had failed me miserably. My midwife took pity on my sorry state and revealed to me that there was only one somewhat reliable kickstarter to labor: castor oil. Castor oil is a type of vegetable oil made from the seeds of the Ricinus communis plants, but it’s definitely not a cooking oil. While it has many household uses from making your hair shiny and healthy to lubricating the creaky hinges on your doors, its most famous use it as a natural laxative. (Spoiler: TMI ahead. You've been warned.)

This wasn’t some type of mystical, wonder food fix. It was surefire diarrhea and horrific gastrointestinal cramps that would possibly jump start my real contractions. It wouldn’t be pretty, but it might work. (In one small study, half of full-term women went into labor after ingesting castor oil. In a slightly larger study, no correlation was found. Still, I was desperate.)

So basically, my midwife was telling me I could wait it out or poop my way into labor. If I chose the latter she instructed me to mix a couple tablespoons of the oil in a glass of orange juice, or mix it up in some scrambled eggs and wait for the literal sh*tstorm to come. However, she warned me that castor oil wasn’t the greatest start to labor. There would be 2-5 hours of intense diarrhea, then however long my labor would take. I had heard terrible tales from friends who had gone the castor oil route only to find themselves miserably dehydrated by the time they were in actual labor. The thought of taking this gross elixir terrified me. But the question was, did it terrify me more than staying pregnant another week or more?

That was exactly the sort of diarrhea experience I was looking for, so I rerouted.

I reached the eve of my due date and was still asking myself that question. I stood in front of the castor oil at my local grocery store, picking it up and putting it back down over and over again. My husband circled back around the store with our other two children three times before I made my decision. I couldn’t do it. My fear of the unknown was too great, so I decided instead to go with what I did know: T.G.I. Friday’s Jalapeno Poppers.

Around the age of 25, my body started rejecting the spicy appetizer section of the frozen food aisle, much to my dismay. I’ve always been a true connoisseur of cheap, re-heatable frozen food fare. Jalapeno poppers, mozzarella sticks, hot wings, spicy taquitos, all manner of mini hot-dog treats — nothing was beneath my palate. But my mid-20s proved to be a time of intense bodily change, and my system could simply not handle my favorite treats anymore. The last time I had tried eating jalapeno poppers I had spent half the night crying in the bathroom, thinking to myself, Oh god, this is literally as bad as labor.

There were still two left on the plate when I had to make my first emergency trip to the bathroom, but don’t worry, I came back and finished them. I am no quitter.

That was exactly the sort of diarrhea experience I was looking for, so I rerouted to the frozen food section and confidently grabbed a box of my once-beloved poppers. Really, this situation was a win-win for me. If it didn’t induce labor, I’d know it was safe to eat jalapeno poppers again. If it did induce labor, I’d get one last taste of delicious deep fried peppers and cream cheese and a brand new baby. There was no downside, except you know, the diarrhea.

I made the whole box and artfully arranged them on a platter, which I ate in the backyard at sunset like a goddess. There were still two poppers left on the plate when I had to make my first emergency trip to the bathroom, but don’t worry, I came back and finished them. I am no quitter.

The cramps were every bit as bad as I remembered them, but they were slightly easier to deal with because I was hopeful that labor was around the corner — and it was. Though I spent a couple hours wondering whether I still had to poop or whether these were real deal contractions, soon it was undeniable. I was in labor. I ate some mozzarella sticks with buffalo dipping sauce (because hey, while I’m at it, why not?) and watched one last Game of Thrones episode before making the call to head over to the hospital. I had a baby a mere three hours later.

While it may not have been the ideal way to go into labor, it was totally worth it. It combined forbidden food with a proven method of success (I mean, yes, that method was diarrhea, but it worked, right?), and for once, I didn’t poop on the table because my bowels were empty. Wins on wins on wins, people. If you’re full term and desperate, give your gastrointestinal kryptonite a try before you go full castor oil. You’ll maybe thank me.

More Like This
Moms, Just Eat The Fruit Dammit
My Parents Never Taught Me To Cook So I'd Always Need Them
Meal Prep Sucks The Fun Out Of Food
The Food Our Parents Fed Us