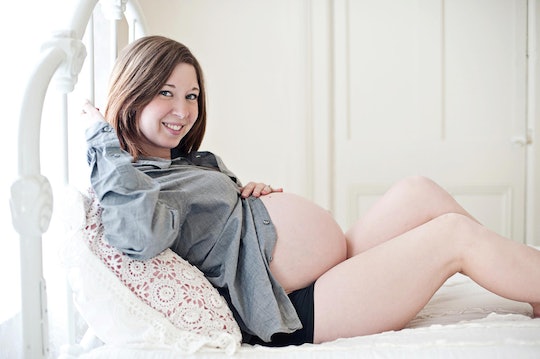 I Ate Soft Cheese And Sushi When I Was Pregnant, & I Refuse To Be Shamed For It

When I was pregnant with my first child, I followed all of the pregnancy diet rules. I cut down my caffeine intake to a single cup of tea a day, and even then, I felt bad about it. I stopped drinking alcohol months before I started trying to conceive. I took prenatal vitamins every morning at the same exact time. I read every warning there was and avoided questionable foods and practices like the plague: no alcohol, no soft cheeses, no deli meat, no hotdogs, no sushi, hardly any caffeine, no dying my hair. I wouldn't even use my moisturizer because of a single trace ingredient. I did everything I could to make sure I was giving my baby the best chance possible.

However, while my diet and lifestyle were squeaky clean as could be, my mental health was lacking. The constant worrying over what I could and could not do, and what I should and should not eat, was driving me crazy. I was anxious over every little thing. I read the back sections of the baby books about all the things that could go wrong, hoping there was something I could do to avoid even the chance of anything bad happening. I was worried from the moment I woke up until the moment I went to sleep at night over things that were relatively insignificant. And if I did slip up — for instance, I ate hot dogs before I knew they were a no-no — I agonized over it for weeks. Focusing so much energy on what not to do wasn’t making me healthier: in fact, it was having the opposite effect.

That's why, when I found out I was pregnant a second time, all (or at least most) of the dietary rules went out the window. I ate my favorite "no" foods, like soft cheese and sushi, while I was pregnant, and I don't really feel bad about it.

My anxiety didn't go away after my son was born; in fact, it persisted for many months after. But after a few years of parenting, I realized that worrying wasn’t getting me anywhere. I was still an anxious mom, but I tried to keep my cool and stop researching all the things that could go wrong. I stopped reading the horror clickbait stories. I stopped calling my mom to amp up my concerns every time he got the sniffles. And slowly but surely, I started enjoying motherhood more.

That’s when I found out I was pregnant again.

I took the pregnancy test after drinking a yard-long margarita at a street fair, certain that it would be negative. I was on birth control. I hadn't been planning to have another baby, but here I was, looking at yet another positive pregnancy test. As soon as I found out I was pregnant, I tried to remember the long mental list I had kept of all the bad habits and foods I needed to kick when I was expecting my first child. Then I decided: to hell with it.

Constantly worrying about every little thing that might be bad for the baby had been way worse for me than simply enjoying a hot dog every once in a while.

I did a little research on the food warnings, and found out there really wasn’t much substance behind all my fear. For instance, I had avoided brie for my entire first pregnancy, even though I learned that it was actually OK to eat when it was pasteurized. I had literally cried while walking past my favorite sushi restaurant because I'd thought I couldn't eat anything in there, and it turned out that sushi was perfectly fine as long as the fish was cooked and I avoided tuna and yellowfin because of mercury levels.

So when I was pregnant with my second, I ate plenty of brie and baguettes, and regularly went out for sushi dinners. The truth was, constantly worrying about every little thing that might be bad for the baby had been way worse for me than simply enjoying a hot dog every once in a while and moving on with my life. Once I stopped worrying so much and finally gave in to some of my cravings, I was much happier.

That's not to say I wasn't judged for my choices. Every time I went to the sushi bar, I could feel the knowing eyes on me and my stomach, but to be honest, I didn’t care. I refused to be shamed for being well-informed and making conscious choices that made me happy during my pregnancy. I even made the choice to eat a few pieces of raw sushi from time to time, and guess what? The world didn’t end. I weighed my risks, and decided to take the plunge every now and again — not because I wanted to put my baby in harm’s way, but because I needed to live in a way that tempered my fears during my pregnancy.

Eating soft cheese and sushi gave me a healthier pregnancy, because it meant I wasn’t always worried that something would go wrong. I wasn’t tiptoeing through my pregnancy in constant fear. I was enjoying myself, enjoying my pregnancy, and if I had the chance to do it all over again, I probably would have eaten more "no" foods the first time around, too.