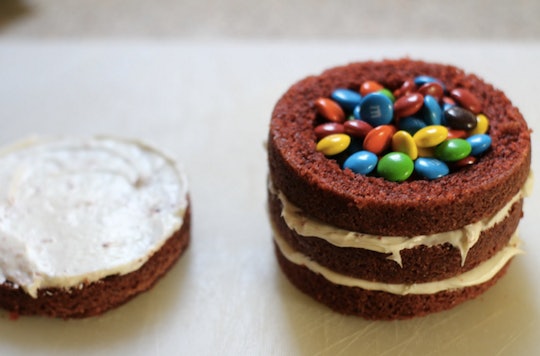 I Baked 3 Complicated Pinterest Cakes, & These Were The Results

Ever since the dawn of Pinterest, my laptop has been overrun by images of cakes and cookies and delicious confections that look impossibly hard to recreate. These outlandishly tall cakes and perfectly piped cookies look more like works of art than treats designed to satisfy a sweet tooth. I can only imagine how guilty I would feel eating something so ornate — especially since as a serious baker, I know the time and effort that goes into making such elaborate confections. But then my editor asked the million-dollar question: Could I recreate the most difficult Pinterest cakes for an experiment and chronicle the ride?

Yes, yes I could.

I should preface this by letting you know this is not a Pinterest fail post. This is a Pinterest victory lap. I may not be very crafty, stylish, good at home improvements, or full of fitspiration (like my Pinterest boards may lead you to believe), but I bake a mean Pinterest-worthy cake. I bake wedding and party cakes for a living. So when I took on the challenge of making three of the most popular, show-stopping Pinterest cakes in a single week, I did not intend to fail. Matter of fact, I was determined not to fail. I was not going to be another Pinterest-fail statistic.

I found some of the most repinned and exciting cakes that Pinterest had to offer and decided to make them all within a single week. I picked the popular and trendy piñata cake (the cake children's dreams are made of), a chocolate chip cookie cake (the cookie that's better than all the rest), and the ombré cake, which has been in-demand for almost every baby and wedding shower, birthday, celebration, and wedding I take on.

I wanted to see just how intense these popular Pinterest cakes were in real life. Were they really the sort of thing a mom could pull off for a birthday party? Even with a background in backing and years of experience under my belt, could I do it?

This DIY Pinterest tutorial for a Piñata Cake came with the promise of being “so easy”; the misleading catchphrase of many a Pinterest fail, so I followed the link and gave it a go. (The photo above should give you an idea of what's involved in this cake, though that isn't the exact one I made.) The step-by-step photographs looked pretty straightforward, so I was feeling optimistic. Since the link didn’t offer a recipe (it just showed a picture of a cake), I figured box cake and a can of frosting were the way to go for the sake of ease.

I made the box cake and split each one into two layers so I’d get a grand four-tiered cake by the end of it. I punched out the holes in the middle two tiers easily, and started to assemble. Everything was going great until it came time to frost the cake, and I accidently put frosting on the entire bottom layer instead of only on the edges. I figured it would be fine, and it was, though in the end the M&Ms didn’t make a grand cascading exit when I cut into the cake. I shooed away any feelings of failure by eating the remaining M&Ms.

This was by far the easiest of the cakes I made. It required no special equipment, and no more time than it would take to make a regular box cake. The only added step was cutting holes in the two middle layers of the cake (which I did with a wine glass; keeping it classy), and filling the cake with candy. I thought there would be slightly more wow factor when I cut into the cake, but it took a while for the M&Ms to fall out. That didn’t matter though, because my son was sufficiently wowed by the surprise candy, so I’d call it a success.

If you’re looking for a Pinterest cake with maximum party prowess and minimal effort, the piñata cake is the recipe for you. If you want to get super Pinterest-y about it, make a homemade cake. Add some sprinkles for zazz. The world is your oyster. Or, do like I did and buy a boxed cake and icing. No one will ever know, and you don’t have to tell.

The Ultimate Chocolate Chip Cookie Cake is a veritable legend of the Pinterest world. With well over 30,000 repins, it was by far the most popular Pinterest cake I found, and for good reason. Three different layers of cookie cakes separated by rich vanilla buttercream (or chocolate, or the topping of your choosing), and topped with sprinkles: it was a force to be reckoned with. It was also a royal pain in the ass to make.

I made the first layer of cookie cake and was terrified that the cookie wouldn’t release from the pan. I’m not quite sure why. It’s just an irrational baking fear of mine that causes me to grease the pan with entirely too much butter. Luckily the cake released beautifully, and I was feeling good.

I took the last cookie out of the pan too early and sure enough, part of the edge stuck to the pan. I was able to cover it up with frosting, but the frustration from making this beast of a cake lingered for quite some time.

The cake itself was not terribly difficult to make and decorate, but it required a lot of time and an ungodly amount of dishes. Do you know how many dishes are involved in making three different types of cookie cake batter plus homemade frosting? Neither do I. I didn’t keep track. All I know is it was too many.

I cannot imagine making this the day before a birthday party. It doesn’t matter how much you love baking. It is the kind of cake that will make you lose your sanity.

Also, while you may think you want three different giant slabs of cookie smothered in frosting and sprinkles, the reality is you do not. It is a monstrosity. A diabetic coma waiting to happen. It doesn’t even taste that great, but then again, it does, and before you know it you’ll have eaten all the leftovers while binge-watching Orange Is The New Black.

A single cookie cake is one thing, but when I put the final dash of sprinkles on this cake, all I could say was, “Good God, I’ve created a monster.” Trust me on this one: don’t do it. Or at the very least, proceed with a type of caution and restraint that I clearly don’t have.

I’ve always wanted to make an ombré cake, so when I saw the Perfect Purple Ombré Cake with its beautiful layers of from-scratch vanilla cake ranging in hue from white to lavender to royal purple, it was love at first sight. (The picture above is just there to give an idea of the cake I made, it's not the exact replica.) I could not wait to try my hand at this towering beauty. It was certainly not an easy cake to make, but it was the most satisfying dessert I've ever cut into, which has to be worth something, right?

The process of making the different colored cakes is actually quite simple. You make your white cake first then add some purple coloring to rest of the batter to make the next shade, and then add more purple for the next, and so on until you’ve made all five cakes. Same sort of thing for the buttercream. That being said, it takes hours, some special tools, and a lot of technical skill that even some of the most savvy pinners will not have. You need gel pastes, piping bags, decorating tips, special spatulas, a stand mixer, a cake lifter, and a turntable. You need to know how to level, fill, crumb coat, and frost a cake. So basically, prepare for a 24 hours of nonstop piping, pouring, cursing, crying, and bowl-licking.

Also, it would have helped if my husband hadn’t eaten just enough eggs in the morning to leave me one egg short of the recipe. I headed out to the store, super frustrated, and then got back to it. Then, by the time I had filled buttercream between all the layers, I realized I definitely wouldn’t have enough left to fully frost the cake. And guess who was out of butter? So back to the store I went. In addition to this recipe being super involved, I was super unprepared. However, when it was all finished, I felt pretty accomplished. Not to mention I absolutely loved cutting into all those beautiful layers.

All of that said, if you want a cake this lovely and tasty, you’d best leave it to the professionals. This may have been all in a day’s work for me, but let’s not forget that I make wedding cakes for a living. Then again, if you’re craving a challenge, who am I to stop you? Ombré on, my Pinterest warrior.

I was feeling fairly cocky going into this challenge, but these Pinterest recipes threw even an experienced baker like me for a few loops. I am now a firm believer that you shouldn't glue a few oversized cookies together with frosting and call it a cake. I think box mix cakes are probably best filled with candy. (but can I urge you all to never buy canned frosting? Cream cheese frosting takes two minutes, four ingredients, and doesn’t taste like death.) Despite its difficulty, I think everyone should experience an ombré cake a least once in their life, even if they don’t make it themselves.

As a mom, not a professional cake baker, I'd say these cakes are probably too stressful for your average potluck or party. However, I think they’re well worth the effort to try at least once, I’m probably just mad I messed the cookie cake up. They’re so fun, unique, and special, their popularity on Pinterest is well-earned. Just know that if you do go for it and decide to make one of these amazing Pinterest wonders, the most important ingredient is going to be a whole lot of patience. And eggs — don’t forget the eggs.

More Like This
These 30 Walmart Appetizers Are Super Bowl Snack Goals (Get It?)
Does The FDA's Plan To Limit Lead In Baby Food Go Far Enough?
14 Recipes For Sick Kids When Everyone's Tired Of Canned Soup & Crackers
25 Cookie Recipes Without Eggs That Are *Still* Delicious
What Parents Are Talking About — Delivered Straight To Your Inbox