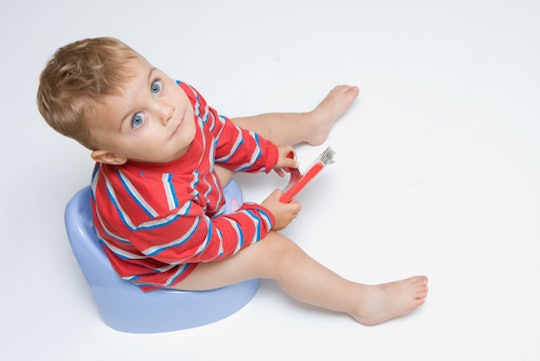 I Basically Potty Trained My Child In One Day — Yes, Really.

Potty training my first child was kind of a nightmare.

It wasn't her fault. My husband and I had no clue what we were doing. The thing about potty training is that you can read all the books you want, but you still have to know your kid and what they need. And because I was a first time parent, we were so gung-ho about leaving diapers behind that we jumped on the potty train far too soon. In fact, I’m not proud to admit we bought her a training potty for Christmas at the ripe old age of 18 months. Worst present ever.

What resulted was months and months of begging her to try to use the potty, of trying to recover from her tantrums and cleaning up accidents. She wasn't ready but we kept on powering through. In the end, it took over us nearly two years to fully train her.

Since it took us so long to potty train our first, I knew we needed to do things differently with our second child. It went much better the second time around. honestly believe I was only able to potty train my child in one day because I learned from the countless mistakes I made the first time around.

The biggest mistake I'd made with my first child was believing that 2 years old was the universal deadline for potty training kids, and that my daughter needed to be done learning by the time her second birthday arrived. (For the record, the average is between 22 and 30 months, according to WebMD.) The pressure to have my toddler in big kid underwear so early in the game was exhausting. So the first thing I did with my second was wait until after her second birthday before I even began to consider putting her on the potty.

I know it is pretty common for potty training guides to suggest that once you start potty training, you never look back. But that is is basically the exact opposite of what I did.

I know not all kids are the same. I know some kids potty train early, but I would venture to guess that early potty trainers are in the minority. So I will always suggest waiting until after their second birthday before you even talk about starting potty training.

I know it is pretty common for potty training guides to suggest that once you start potty training, you never look back. But that is is basically the exact opposite of what I did. We started her day in panties a few different times. I would put her on the potty once and give her a few minutes so I could determine if that day was the day we were going to potty train. To be perfectly honest, the clearest indication that she wasn't ready was that she would sit on the potty for a few minutes and announce she went when she hadn't. Then she'd get up and have an accident just a few minutes later.

There is the moment of recognition when you're potty training a kid. All of sudden, you can see in your kid’s eyes that they know they are in charge of what comes out of their body. With my first, we just put on the potty until we got lucky with the timing. If she peed while we were there, we thought we were making progress, but we weren't: she still didn't know how to wait to get to the potty, or how to tell us when she had to go.

Since we waited until we knew she understood what she was doing, potty training was a breeze.

With my second, if I didn't see that look in my daughter's eyes the first time I sat her on the potty for the day, I put her back in a diaper and waited at least two weeks before I tried again.

My daughter was nearly 2 ½ before I could tell she understood what I was asking her to do. At that point, we committed fully to potty training. We set a timer for every 10 minutes that first day and by the end of that day, she was asking to go to the potty when she needed to go. Since we waited until we knew she understood what she was doing, potty training was a breeze.

Of course, she's had a handful of accidents since then, but for the most part she hasn't looked back. She almost immediately stopped needing a diaper at night, and she can go long stretches of time without a trip to the bathroom.

My approach might not work for every kid. In fact I am fairly certain it won’t, because every kid is different. For my daughter, I think her chill personality made it especially easy. She didn't have any anxiety over going to the bathroom, and we weren't fighting any stubbornness since she is pretty easy to please.

I do think there is something to be said for not rushing into the whole potty training thing. In my experience, simply waiting until they are truly ready and can understand what is being asked of them, instead of pushing the issue at a young age, can save you a lot of unnecessary power struggles and needless frustration.