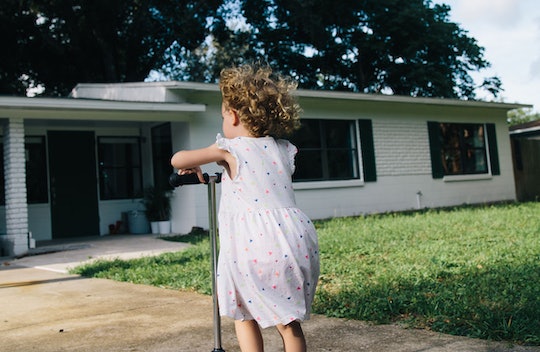 I Believe Life Starts At Conception, But I'm Still Pro-Choice

I believe that life begins at conception. Let’s just get that right on out of the way. As an infertile woman who would have given anything to be able to carry a child beneath my heart, I mourned the embryos from my failed IVF cycles as babies I’d already grown to love. Nearly ten years later, I still have pictures of those embryos I have never been able to throw away.

I believe that life begins at conception.

Today, I am mom to a 6-year-old through adoption. I am thankful every single day that my daughter’s other mama chose life.

But this is where my views might surprise you. Because while my daughter is a flesh-and-blood reminder of what that choice for life can become, I firmly believe that her other mama should have always had a choice. That all women should have that choice.

I believe life begins at conception, but I also recognize that a) not everyone believes the same as I do, and b) life is long and hard and complicated, and circumstances are sometimes so much more convoluted than they seem.

I’ve spent years working in populations with high poverty, addiction, abuse, and incest rates. I’ve seen first-hand that life is not always black and white, and that some circumstances are too traumatic to endure.

It’s a pretty terrifying thing to be raising a daughter in a world where women are actively losing rights and body autonomy.

The thing that kills me about these bans is that they have been designed without compassion or logic. We know, historically and statistically, that abortion bans do not actually prevent abortions. In fact, research has found no statistical difference in the number of abortions that take place between countries where it is legal and those where it is not.

Abortions happen regardless of whether or not women have legal access to that choice. The difference is that when abortion is illegal, the choice suddenly becomes so much less safe.

This isn’t just true for women seeking illegal abortions, though. It’s also true for women who need abortions for medical reasons. When doctors are afraid of potentially being prosecuted, they hesitate — even in cases of true medical need. They wait, and women die as a result.

To me, the definition of pro-life is someone who actually fights to preserve life, in any and all forms.

When the government gets in between a doctor and their patient, people die.

So not only do abortion laws not actually prevent abortions, they ultimately result in more lives lost. And that is a truth I simply cannot abide by.

Yes, I am pro-choice. But as someone who truly believes life begins at conception, and a woman who honestly aches at the thought of any woman feeling the need to seek out an abortion — I also find myself identifying as pro-life. It’s just that to me, the definition of pro-life is someone who actually fights to preserve life, in any and all forms.

Not someone fighting to simply punish and regulate women and their bodies.

So you start with comprehensive sex education, which has been found to reduce teen pregnancy rates by researchers from the University of Washington.

Then you make birth control free and accessible to anyone who wants it, a policy that has also been found to reduce teen pregnancy rates by 40 percent and teen abortion rates by 42 percent in Colorado.

Then you look at the reasons why a woman might choose to have an abortion. According to the Guttmacher Institute, 59 percent of women receiving abortions already have children. These are not women who are clueless about what they are giving up. These are women who know exactly what they are walking away from, and who are doing so because they genuinely believe they cannot care for another child.

So what would it look like if we had policies that actually supported women and families, potentially making it easier for those women to keep the babies they may have wanted, but feared they couldn’t care for?

What if we fought for healthcare for all, truly affordable childcare, and better family leave policies? What if we spent our time advocating for policies that protect the lives already here, instead of fighting for laws that only serve to penalize women who might dare to make a choice we don’t agree with?

Abortion laws do not prevent abortions. But the above policies absolutely do.

The irony is, most those in the far-right camp pushing for anti-abortion legislation would simultaneously argue against each and every one of these measures wholeheartedly.

Which kind of makes you think they don’t actually care about life at all. They just care about winning, and judgment, and shame.

There are currently over 100,000 children in the United States living in foster care, already cleared for adoption and waiting for their forever homes (there are another 300,000 not yet cleared for adoption, languishing in limbo within the system). Approximately 20,000 children will age out of that system every year without ever finding the permanency they all deserve. And when they age out, they are at greater risk for homelessness, addiction, jail time, and yes… unplanned pregnancies of their own.

Abortion will always be a part of our society. It dates all the way back to ancient Rome and Greece, and it will continue on long after each of us is gone. There is no stopping abortion, but there is the opportunity to make the choice as rare as possible.

And that’s an opportunity anyone who is truly pro-life should be leaping on.

None of this is actually about preserving life. It’s just about winning.

Instead, we have politicians pushing forward bills meant only to penalize women who might make that choice, and doctors carrying out sometimes life-saving medicine. These politicians know those bills are going to be tied up in court. They understand they won’t come to fruition any time soon. The time and money that is being spent on this now is being spent in the hopes that one of these bills will work its way on up to the Supreme Court, challenging Roe v. Wade and potentially making it possible for all states to enact such laws.

None of this is actually about preserving life. It’s just about winning. And about condemning people who might make that choice.

Because if this were about protecting life, those same politicians would be pushing forward the measures we already know reduce abortion rates. They would be fighting just as hard for the lives that are already here as they are for the ones that remain unborn.

Maybe it’s simply easier for those who have their heads in the sand to fight for a nameless, faceless clump of cells than it is for them to fight for the living, breathing, thinking human beings who might turn out to be gay, or transsexual, or poor, or liberal, or brown. That could explain why the people who are often the most vocal about putting an end to Roe v. Wade are also the ones most likely to fight against measures meant to protect the lives already here.

We don’t do this to men. We don’t force them to get vasectomies, or criminalize them for encouraging their mistresses to abort. We don’t get in between them and their doctors.

So why are we doing so to women?

For me, being pro-life is about fighting for all life — including the women and children already here. And being pro-choice is about doing everything possible to ensure all women truly have a choice: the choice to prevent an unwanted pregnancy, the choice to keep a wanted one, and the choice to do what she knows is best for her and her family when all else fails.

When we use logic and compassion to confront the issue, there are people on both sides capable of coming to all the same conclusions. So why aren’t we working together to fight against these laws meant only to punish women, and for the measures that actually preserve life?

If we could only bring ourselves to ditch labels, and to stop working against each other, we might just find our voices are louder and our abilities stronger than anything being pushed by the extremes.

I look at my daughter every day, and I am beyond thankful for the choice of life. But I want more for her than a world that fights to legislate her body. I don’t want the government having any control over any of her medical choices ever.

She deserves better than a future where she has no say.