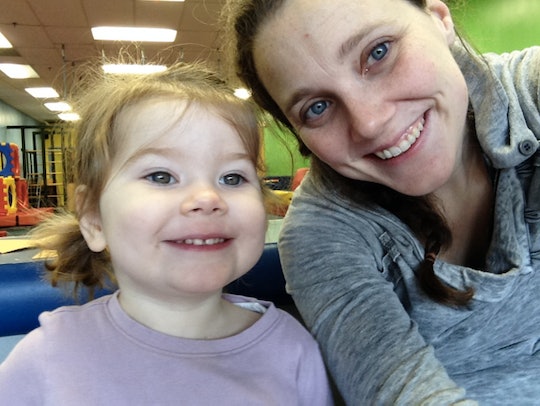 I consider myself a lactivist, which, for me, means doing what’s best for me and my kids and mostly not giving a shit. Once I got over that initial hurdle of feeling somewhat awkward whipping my breasts out in public, I didn’t let location, time, activity, or much of anything get in the way of my kid wanting or needing to nurse. Even after she passed first birthday or her second birthday.

I don’t see many other women nursing their toddlers in public. I know plenty of women who do choose to breastfeed past infancy, but I don’t think I have ever seen another mom breastfeeding a child who can walk, talk, and draw pictures. I’m sure it’s in large part due to our culture’s sexualization of breasts and because the act extended breastfeeding is often deemed “disgusting,” “weird,” and “sick” etc., by some (normally very vocal) people. Even if I don’t feel any shame, it doesn’t mean those comments don’t make me flinch.

When I’m nursing, especially in public, I tend to focus only on my nursing. It’s prime connection time: my busy, outgoing toddler slows down and wants to chill with me. It’s her only break from looking at everything, touching most things, and saying “hello” to everyone. But I decided that for a week, instead of looking down, I’d look up and acknowledge the other people in the coffee shop, on the playground, and at the library. I’d bravely make eye contact where no eye contact was made before. It was a small coup in my proud campaign as a lactivist. My ultimate “I give no heed to what you think” statement.

I was well-prepared in case anyone gave me any trouble. You hear about women asked to breastfeed in the bathroom or given crap for breastfeeding on planes. I’m part of breastfeeding groups online, and every other week or so, there’s a nurse-in (like a sit-in, only with boobs and babies) at some place that has treated nursing pairs abhorrently. In fact, ever since I began breastfeeding my children in public five years ago, I’d been prepared to spout my legal right to nurse, the reasons why my baby should be allowed to eat everywhere, and why there’s nothing indecent or sexual happening when my breasts are exposed. I’ve almost been disappointed that I’ve never had a chance.

My first stop on this unabashed nursing campaign was a Dunkin’ Donuts, where I was meeting up with a new friend. I realize this is stereotyping, but I was nervous when a muddy SUV parked in front of the Dunkin’ Donuts touted some really right-wing ideals. I don’t have much basis that Republicans are against public breastfeeding, but I’m decidedly less optimistic about their views lining up with my socialist, peace-nik ways -- breastfeeding included.

Sure enough, when the sprinkles and icing were devoured from atop her donut, my giant 2 year old climbed into my lap and gave me the universal sign of wanting to nurse: she clawed furiously at my neckline while saying a less-than-genteel “Please!” So I popped her on. And I surveyed the room. The most reaction I got was from a woman who, while adding sugar to her coffee, gave me a double-take that was almost comedic. First, her smile said, “Oh, how nice you’re snuggling your baby.” She followed that with a look of, “Oh! That baby is currently sucking on your naked breast.” Then, anticlimactically, she turned back to her coffee.

My friend kept right on talking without pause. Breastfeeding my giant toddler was a complete non-issue. And the family that I discovered belonged to that Republican car -- they didn’t even look in my direction; they were too busy parenting a tween and a teen.

Getting In The Groove

I nursed everywhere I could think of to similar results. At worst, people looked surprised. At best, grandmotherly-looking-women smiled. Once, in my favorite coffee shop, one older woman even winked at me! That felt awesome! I know from talking to my own grandmother that when she was raising her children in the ‘50s and ‘60s, it seemed like no one breastfed. Even when she tried, she had no help and very little encouragement from medical professionals. So in my mind, these older women were probably really happy that I felt comfortable enough with nursing to do so in full view. I had gotten help and encouragement they hadn’t.

Waiters didn’t seem embarrassed taking my order with my breast on full display. No one questioned my daughter’s going straight from her curry to the breast. No one gave me any crap about daring to feed her while the rest of us fed ourselves. It was really freaking awesome!

I realized I had actually been somewhat nervous about this. Maybe I was even a little embarrassed. It’s been easy for me to focus on my kid instead of the people around me, and I noticed that, at first, it was really hard to look up because I was worried I’d see judgement in people’s faces and that it’d cloud my positive feelings toward nursing my toddlers. But I was wrong. Happily wrong. And now I can bravely look up. I know my experience is probably not universal, but I hope, perhaps, other moms will feel a little braver about nursing in public, even if their “nursling” is old enough to ask for milk, or even spell it.

At first, I wished I had a more dramatic story to share. I wished I had reason to stand up and say: “How dare you not judge me for giving her a cookie and then judge me for feeding her the healthiest thing she could eat!” Heck, I would have settled for giving someone the ultimate stink-eye. But, alas, my experiences were nothing but positive.

Nursing my daughter in public for the past two weeks was awesome. I was more aware of people and they of me. I took time to wait for their negative comments, their looks, their stares, but they didn’t come. I realized that this is exactly how breastfeeding and parenting should be. We should feel encouraged and nurtured by the public at large. We’re doing the monumental task of raising the next generation. I wouldn’t mind a little more cheering from the grandmothers in the crowd. One thing’s for sure, if I see another mom nursing in my favorite coffee shop, she’s getting a high-five from me, especially if her child is gigantic toddler.