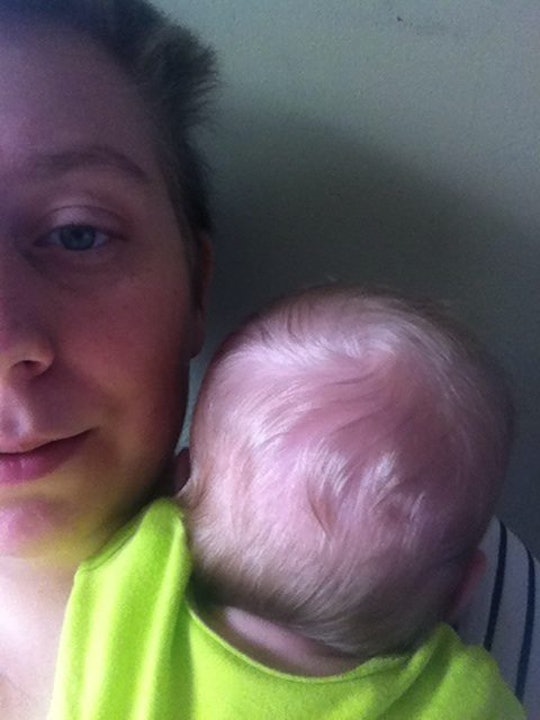 I Came Out As Transgender After Weaning. Breastfeeding Doesn't Feel Like It Belongs To Me.

In the spring of 2015, I gave birth to a beautiful baby, and plunged head first into breastfeeding culture. That part of my story is not exactly atypical of millennial parents, particularly those with a slightly “crunchy” bent. But there’s one big difference between me and your average baby wearing, organic buying, mama. I’m a transgender man, and although I wasn’t out at the time my child was born, and only began my transition years later, I now identify as a father rather than a mother. And as another August, and another World Breastfeeding Month, brings countless stories and images about the miracle of feeding babies human milk, I’m forced to face my conflicting feelings about the language, and the imagery, of breastfeeding promotion and activism.

Feeding my kid was a huge part of my identity for so long, but World Breastfeeding Month is about women and motherhood in a very particular way that is categorically not about me. Still, that doesn’t stop me feeling nostalgic for a time when I could pretend that it was.

I am far from the only transgender father to chestfeed, which is the preferred terminology for most of the transgender community, since the word “breastfeeding” can carry some heavily gendered connotations. Trans people have babies all the time, and while many men may be uncomfortable carrying a pregnancy or chestfeeding their baby, there are still plenty of men who do. So many, in fact, that there are multiple Facebook groups for such men to support each other!

I loved feeding my baby, and I loved that it was something I had in common with others.

And then there are guys like me, guys who had their kids, fed them, and didn’t come out as trans until after they weaned. My feeding journey with my child was not without bumps in the road, and our success was hard won. When she was first born, she was eager to eat, but couldn’t seem to sort out how to latch on. An endlessly rotating cast of lactation consultants and well-meaning nurses helped me those early days in the hospital, and I was terrified we would never get it right.

Eventually that struggle faded, but as soon as it did I was back in the hospital, separated from my baby, to have my gallbladder removed. I was terrified that our nursing relationship would end there (please note that while I use the term nursing as well as chestfeeding, not all trans people are comfortable with the word, and you should never assume they are). We were apart for five whole days, and she was just under a month old. But when we were reunited, everything seemed to get easier. We settled in for 19 long months of feedings.

And during that whole time, I presented to the world as a woman. Maybe I was queer and I was weird and I didn’t fit in with the moms and I shaved my head every spring, but the world still saw me as a woman. And I tried hard to see myself that way too.

I remember the first World Breastfeeding Month after the baby was born. While I always aimed to support my formula feeding friends and not judge them for their choices, I can’t deny that I felt proud of myself. I was proud of making what felt like the best choice for myself and my family, and I was proud of being part of such a large movement. Even when I was in the grips of postpartum depression, feeding my baby felt like the one part of parenthood, maybe of motherhood, that I was truly good at. When every other cultural touchstone about what it was to be a mom felt wrong, I could still feed my kid.

In retrospect, I was clinging to gender-essentialist and problematic attitudes about womanhood in order to stay in the closet as long as possible. But still, I loved feeding my baby, and I loved that it was something I had in common with others. For over a year and a half, my life was punctuated by the act of chestfeeding. I fed my baby in public and at home, I dutifully woke up for groggy night feedings even after I was assured she was too old to “need” it by friends and relatives. I cut visits with friends short to go home and feed the baby. And I fed her more often when she was sick, or sad, or overwhelmed. In fact, when I started freelance writing, I wrote many a draft on my phone while my baby happily nursed. And I wrote about breastfeeding! And I’m ashamed to say this now, but I rarely bothered to use inclusive language, even though in the back of my head I always knew that some trans men and nonbinary parents also fed their babies from their own bodies, and I admired them for it.

But staying closeted indefinitely wasn’t going to work, and eventually I had to face my truth.

I don’t feel I have a right to claim breastfeeding as my own anymore, which is a weird way to feel when what you call breastfeeding is something my body literally did for 19 months.

This August, while many mothers I know celebrate breastfeeding, I am instead celebrating one month of hormone replacement therapy. Twelve months of testosterone has given me a lower voice, a barely noticeable scraggle of hair on my chin, and for some reason, lots of back hair. But most importantly of all, it’s given me a sense that my body is my own, that I am at home here. Yet, it doesn’t make me want to erase my history. For those of us who transition later in life, grappling with the past can be complicated. I lived for over three decades under the assumption that I was a specific gender. And while I may cringe at certain aspects of the past, I still have fond memories, of course I do. And one of my fondest memories is nursing my baby.

The language around breastfeeding awareness is always about “supporting women” and “uplifting mothers.” As a person who once used similar language, I sometimes feel like it would be hypocritical of me to demand more inclusion now. I feel torn, on the one hand so much of mom culture, especially crunchy mom culture, can be deeply transphobic, and we need people who are willing to stand up against that hate. On the other hand, aren’t the majority of the people feeding babies in this way women — women who also face misogyny and other forms of discrimination that many trans men (at least once they reach a certain point in their transitions) can avoid?

World Breastfeeding Month, with all of its pink and talk of motherhood, isn’t mine anymore. But the weird thing is that there’s nothing to take its place.

There is no time set aside to celebrate trans people for feeding our babies, or even any gender neutral celebration of the magic of human milk. Maybe there should be. Maybe we all deserve to be proud of the hard work we put into this whole parenting thing.

More Like This
Can You Burp A Baby Too Hard? A Pediatrician Shares Tips For Gassy Tummies
Here’s What To Do If Your Baby’s Nose Bleeds After Suctioning
Cry-It-Out: The Popular Sleep Training Method, Explained
The Best Toys For 6-Month-Olds Will Do More Than Just Keep Them Occupied