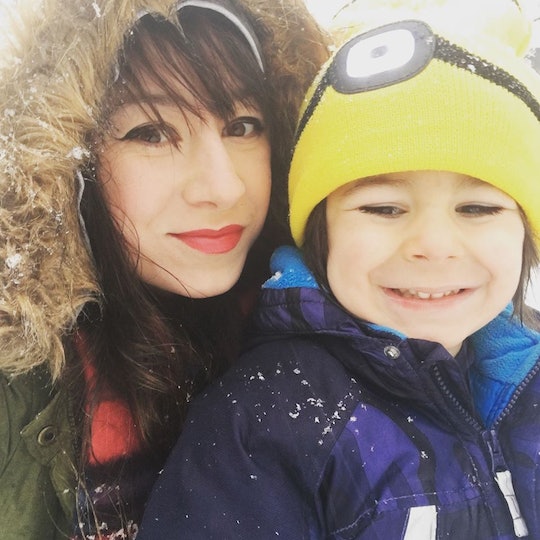 Guys, My Kid Won't Poop In The Damn Toilet & I'm About To Lose It

Five words. Five seemingly innocuous, arguably adorable words that have become the bane of my existence. Because while my 3-year-old son is wonderfully capable of peeing in the toilet, sleeps through the night sans accidents, and tells me when he needs to make his way to the nearest bathroom early enough to save his shorts, I can't get my kid to poop in the toilet. At all. Ever. Not once.

For reasons that were up until recently unknown, my child is afraid to do the dirty in a toilet. He's delighted to pee in one, mind you. He thinks it's "fun," and often tries to aim his steady stream in different locations that make it more of a game than a release. But there's something about sitting his naked bum on a toilet that scares him, and the end result of this confounding fear is a never-ending potty training disaster that has left me frustrated, disheartened, and cursing diaper manufacturers because why do they have to be so damn expensive?

Eventually, this fear will subside and I will celebrate the sweet, sweet sound of my kid's poop hitting toilet water.

Perhaps I'm a garbage human being who enjoys miserable company, but I was pleasantly surprised to learn that a fear of pooping in the toilet is actually pretty common amongst toddlers. According to Kandoo Kids, "For a lot of kids, pooping on the potty is downright scary. They’re used to the snug comfort of their diaper, so having their backside exposed just feels weird (and cold.) And the splash of the poop in the potty can trigger all sorts of scary thoughts." Fabian Gorodzinsky, a community pediatrician and an associate professor at the University of Western Ontario, told Today's Parent, "It’s quite common for preschoolers to withhold bowel movements," because pooping in the toilet is so damn terrifying.

In other words, I'm not the only parent silently pleading for another human being to take a sh*t, the weirdest want if there ever was one.

While knowing a fear of pooping in a modern toilet is typical for toddlers is reassuring, and dealing with a steady stream of poop-filled diapers assures me that my son is having regular bowel movements, I feel my impatience mounting on a daily basis. According to the Child Development Institute, "most children become physically capable of independent toileting between ages two and a half and four." Four?! Am I really doomed to wipe my child's ass for another year?! Will I have spent four years of my life wiping and disposing of another human being's feces, even though that same human being can pee in a toilet "like a big boy" without a single, solitary issue?! Is this my life? Really?

Look, I know what I was subjecting myself to when I decided to become a mother. Dirty, smelling, desecrated diapers are par for the parenting course, and I have an iron stomach — I'm not trying to cut corners for my benefit. I can handle the smell, and the diarrhea poops, and the huge poops, and the tiny poop nuggets that always escape the confines of a soiled diaper that I always, always, manage to step on. I'm not trying to buck my parental responsibilities. It's just that, well, I thought my 3-year-old would get the whole pooping thing down as soon as he mastered peeing. I mean, he stands up when he pees. He has to aim. Isn't that more work? To poop, all he has to do is sit down and "open the poop gate." I don't see the problem here, people. From a logistical standpoint, this should be the easy part. You literally have to sit there and act like you're waiting for the F Train, kid. And since I'm raising my son in New York City, he's had plenty of practice.

My restlessness aside, I know that, on the whole (pun intended) this is nothing more than a minor inconvenience. According to Elizabeth Pantley, author of The No-Cry Potty Training Solution, "the age that a child masters toileting has absolutely no correlation to future abilities or intelligence." My kid won't have issues with mathematics or memorizing the periodic table because he prefers to poop in a tight-fighting diaper. Eventually, this fear will subside and I will celebrate the sweet, sweet sound of my kid's poop hitting toilet water. Gorodzinsky told Today's Parent that if your child is asking for a diaper, you should give them a diaper, so I will continue to give my son the space and time he needs. Apparently.

But can we at least give parents a little head's up about this common potty training roadblock? Can we manage our expectations, and worry less about the milestones our kids hit, and when, and more about how we (read: I mean me) are going to handle another year of wiping someone else's ass?! Because, honestly, I might need my own diaper to make it through this ongoing experience. Another year of diaper purchasing has me scared sh*tless.