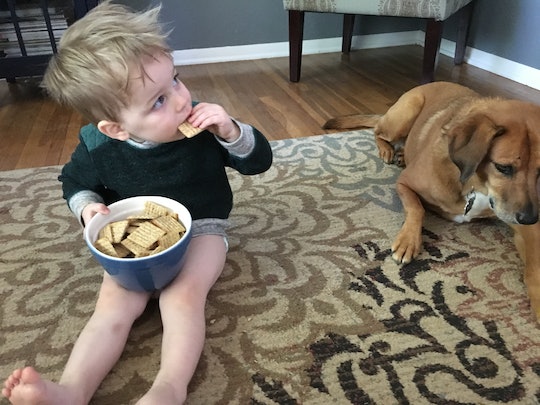 My Toddler Is So Picky At Meal-Time, I Dump The Food And Run

Our baby began eating solids around five months. Feeding him prior to that was a mixture of heaven and hell. Breastfeeding had been hard, but the end of that time gave way to formula — a lot of bottles to clean, but a simple process. Shake the formula, and feed. Baby eats hungrily. Rinse bottle. Do again at the onset of hour number three. The bottle was a surefire thing. When he began to sit down for solids, that, too, proved to be fairly easy. There wasn’t a vegetable he didn’t like. All fruits were pleasing. Rice cereal doesn’t exactly assault the palate, flavorless as it is. We did a combo of making his foods on our own and giving him prepared packages from the store. Occasionally he’d turn his nose up at something, but for the most part, a cake walk. I never thought I'd become one of those moms racked with worry about their picky eaters.

He moved onto finger foods and "real" meals and being able to essentially eat the world. And when that little sausage moved up the food chain, he became a monster in the kitchen.

It sounds like an exaggeration, but I can hardly handle being around my fussy eater at meal time. If my husband isn’t home, I just lock my teeth together and hand him a plate of food. I avoid his eyes while setting it down. Any direct eye contact leads him to believe he has all the power. (It feels like he has all the power.) But if my husband is home?? I avoid my son in his highchair at all costs.

He is luckier than he can ever know. He has never known actual hunger. His food life is a damn dream. How dare he!

And I don’t just mean that I try to stay out of the kitchen. I often seek solace behind our closed bedroom door. Or on our second floor. Sometimes I’ll say I have errands to run and jump in the car, headed on my way to nowhere at the speed limit plus 5 percent. I don’t want to hear my son whine over the ample food choices we give him, some of which are flat-out delicious. I can’t give into his wild cries for something just a little more pleasing to his spoiled palate. He is luckier than he can ever know. He has never known actual hunger. His food life is a damn dream. How dare he! (I am aware this seems a little unfair to my husband. My husband, however, gets riled up about nothing. You think I am kidding but I am not kidding. It comes in handy with a toddler.)

I had been warned that meal times could be challenging. My friend Courtney had told me that food was the hardest part of parenting for her. She said it nearly made her lose her mind, and that she spoke to her daughter in tones she never would have imagined when they were going head to head in battle. But her words did nothing to prepare me for the fights that take place every day, three times a day (unless he eats at daycare, which is possibly my most favorite thing that exists.)

He says 'milk' for any and every liquid, 'apple' for every fruit, and 'cookie' for, well, cookies.

I know I have some fault in this. That power he thinks he has? I gave him the idea that he does by getting all flustered and freaking out. The ample food choices we provide? We probably need to pare them down so he stops thinking of himself as a tiny king. If he doesn’t like what he is served, he can go to bed hungry. Maybe he’ll get to know hunger! To know hunger is humble, right!?

There is another factor at play, of course, and that is that he can’t communicate with us efficiently yet. He can’t really tell us what tickles his fancy, and we can’t even bribe him. He says “milk” for any and every liquid, “apple” for every fruit, and “cookie” for, well, cookies. He really sealed that into his lexicon quickly.

For now, I’m going to work on staying home, and staying in the kitchen, and staying steadfast in the guidance of my little terror at teatime. I can’t run away from my problems (*cough* child). We are going to figure this out together.

Footnote: His daycare was closed today. I was shaking in my boots at the prospect of three meals wholly dependent upon me. Would he beat me down? Would I win? I needn’t have worried. Maybe he could smell my fear and decided to go easy on me, but so far, the darling has eaten three giant bowls of cereal and a plate full of broccoli, baked beans, and eggs. I may have been a little fried before, but suddenly, I'm feeling easy.