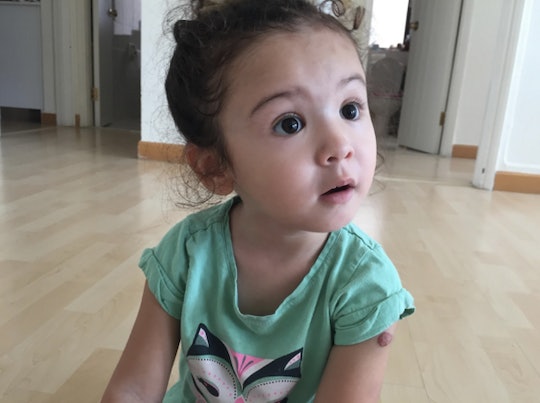 I Challenged My Kids To Not Ask For Toys This Christmas

Christmas is about so many things. It’s about time spent with family and friends, food, trimming the tree, hanging stockings, doing kind things for others, drunk uncles, singing carols, drinking mulled wine, seeing festive light displays, and the list goes on and on. But for kids, though they surely enjoy the participation of all the things just mentioned, Christmas is about the toys. Yeah sure, they love to frost a snowflake cookie or two or eat the See's Candies that the neighbors dropped off, but they never cease to be excited about the wrapped boxes accumulating under the tree. You can't really blame kids — the holiday is built around gift giving and gift getting — but my kids are now at the age where they know enough to know they don't exactly need more toys, they just want them. And it gave me a great idea: what if I asked my kids to make a Christmas list without asking for toys?

Equating Christmas with toys and Santa Claus has been the drill for kids for over a century. We all shook the boxes, waited for the Toys “R” Us Holiday Gift Catalog to come in the mail, and wrote at least three drafts of letters to Santa, when we were kids, too. With a 3 year old and a 13 year old, though, I was really interested to see what would Christmas be to my kids if toys weren’t in the equation? Each year they make a Christmas list to send to the North Pole, and every year it's flooded with their favorite toys and gadgets and games and goodies. This year, though, I wanted things to look a little different.

My kids are 10 years apart, and even though my 3-year-old daughter may be a bit too young to understand the reasoning behind this experiment and my son may be (almost) beyond asking for toys, I still wanted to see how they’d react when I put some restrictions on the Santa Letter. My son may have dropped the “Dear Santa” from his letter a few years ago, but he still likes the idea of writing a list of gifts he’d like to receive. And being just 3, though my daughter understands the concept of writing the letter to Santa, her scribbles addressed to the “Nowth Poh” call for some heavy interpretation.

Lucky for them, the Santa Letter was getting the switch up this yeah. Oh, yeah. Little did my powerful twosome know that when we sat down to scratch out the letter to Old St. Nick, they couldn't include a single toy.

To kick things off, I sat each of my two kids down on separate occasions. They are two kids, very far apart in age with obviously different interests and wants, but they both reacted pretty similarly when I told them I wanted them to write their Santa wish list: I didn’t have to ask them twice, let's just put it that way. I handed them a notebook and a pen, and they both lit up and enthusiastically got comfortably situated and started writing/doodling.

Before my son could write Xbox One, and before my daughter could draw a picture of … something unrecognizable (a chocolate bar maker), I told them to wait: their lists couldn't include any toys.

It was as if someone pressed mute on our lives. Then came the pouts.

I said it again:

Nope. You can’t ask Santa for any toys this year.

My son reined in his “WTF” face, smiled slightly, and let out a chuckle (you know that teen “whatever, mom” chuckle?). He then reminded me, "That’s fine because I don’t really want any toys, anyway,” as he continued to list his gaming-related picks. Already he'd found a way around the rule, but in order for this experiment to have the impact I intended, I clearly needed to modify the terms for my son. “No gaming anything,” I said. “No controllers, no headphones, no keyboards (‘keyboards?’ Sh*t, I just lost some Cool Mom street cred). NO GADGETS!”

I had expected a bigger reaction to that last catchall restriction, honestly, but he put his head down and went back to work. I couldn’t wait to see what he was writing…

When I told my daughter that she couldn’t include any toys on the list, she definitely did a double-take. But after a few bewildered seconds, she put her little paw down to the paper with the pen and continued to draw. “That’s OK,” she said as she started drawing pictures. “I’m gonna ask Santa for an elephant then.” And (she drew an “s” shape) a snake, and a rhinoceros, instead. DUH! Of course! I said to myself, when you can’t have toys, exotic animals are the next best thing.

What would you ask for from Santa if you couldn’t have any of those “pets” either? I asked my 3-year-old daughter. “I would ask for some jewelry then. Like some Peppa Pig necklaces, bracelets, and ring-making kits… “ Oh, dear. I could tell I was going to have to reiterate the rules again.

When I got the chance to see what my son’s no toys, no gadgets list looked like, I was reminded about how literally kids take instruction (or, if I'm being honest, how good they are at getting around rules). The things on his list were essentially “big kids toys,” and he included clever ways to get his “toys” without actually listing them. His list read, “RAM for my computer, money, online money, gift cards, clothes, and more furniture.”

FURNITURE? EXOTIC ANIMALS? Who, exactly, am I raising?

But, what if you couldn’t have material things? Come on kids; represent! I actually said out loud. I was frustrated that my kids didn't get the heart of this experiment — that they didn't need more, they needed to give — and I was annoyed that after two rounds of explaining, the message still hadn't sunk in. Did they just not get it?

Then, somehow, something clicked.

"Ahh, OK, I get it," my son said as he slow-nodded in my direction and suddenly got very mature. He went back to his Santa-list position, and came back to me only a minute later. He had crossed out everything on his list – the gift cards, the RAM, the clothes, the furniture, and had just left money. And then underneath it all he reiterated:

Money, so I can buy other kids in need the toys they’ve always wanted.

And that’s when I started to cry.

“Really, mom,” he said, “I don’t really need anything, but other kids do.” And then I noticed there was also something else written at the bottom. “Plane tickets to fly home and visit grandma and grandpa.”

We live in Hong Kong, halfway around the world from my parents and the rest of our family. Not being able to be with their grandparents, aunties, uncles, and cousins for the holidays has been tough on the kids. It’s been tough for us all. I exhaled visibly and gave him a big hug.

Though it may have seemed like this spontaneous exercise was only designed to encourage one type of “right” answer, I really simply intended it as a way to remind my kids to see holiday gifts and giving as much bigger and more meaningful than just receiving toys. I wasn’t sure exactly what my kids would say, but when my son busted out those sentiments, I felt so proud of him. Maybe he knew what I was getting at, but it didn’t really matter. I knew he was sincere with his answers. Knowing that he would honestly get so much joy out of watching others receive made my heart so full. My son is a big-hearted soul who's always been really good at putting the needs and feelings of others before his. He’s always inspired me with his goodness, and today was no exception.

Wanting to visit his grandparents showed me how much he values family. It made me sad to be reminded of how much he misses them and longs to see them, but it also made me so happy to know that he has such a strong sense of his relationships with his loved ones. His answers instantly lit me up with inspiration, and I was glowing in the Christmas spirit.

Stella got intense with her pencil and pad and started “writing” her list in seismograph scribbles, her mocktail version of cursive. “OK, mom,” she said, “I will ask Santa for something else. How about a scooter? Not for me, but for grandpa,” she assured me.

Then she casually added:

Actually, I wish I could see my grandma and grandpa.

I pushed my bottom lip out. “Me too,” I said. My kids were in separate rooms, each filling out their own wants and desires, but their hearts were the same. As their mom, nothing floored me more.

I asked her if she would ask for anything else, perhaps for other little kids? She thought about it for a minute and said:

Yes, I will ask Santa for kites and kitties and blankets for every little kid that is sad and doesn’t have any toys or blankets.

What started out as a spontaneous exercise for my kids as a way to sneak in a good moral lesson ended up schooling me instead. Even though I had to steer her a bit, once she was given the suggestion to use her list for others, she completely embraced it. Stella’s face was so bright and lit up when she talked about making all the sad children happy with kittens and kites. I was feeling so warm and fuzzy inside.

I was reminded just how pure kids hearts are, how they see the good in people, and how clearly they want that good for everyone. I'd asked my kids to complete this experiment, but turns out I was the one who was learning the most.

Step 4: What Are Toys, Anyway?

Sure, every kid wants a toy for Christmas. How could they not? Santa Claus and children’s books and sales circulars and movies and commercials offer them every reason to believe Christmas is a holiday about getting toys! And yes, the laughter and excitement of getting goodies is part of what makes Christmas the joy-filled, wondrous, awe-inspiring time of year that it is. But it's not the only thing that makes Christmas so great.

As it turns out, the spirit of Christmas is something that speaks to everyone, even toy-loving kids. Maybe they don’t care so much for singing Christmas carols or hanging garland on the tree, but they care about the important things: giving to others and being with their families. Sure, my son probably really wants more RAM for his computer, but I know he’d gladly go without that and anything on his “toy” list for even a day with his grandparents. The same goes for my daughter, who would run past every animal in the jungle to get to her family.

It was interesting to me that neither my 13-year-old son or my 3-year-old daughter were all that bothered to give up the toys on the list. They might've made me work hard to get them there, but once they got the hint, it was a no-brainer. Maybe my son wasn’t taking me seriously, and maybe my toddler was just following instructions, but it was a reminder for me to give my kids more credit for being caring, self-aware little beings. This exercise also reminded me about how important it is for us, as parents, to nurture that selflessness and the pure-heartedness that children possess.

So this Christmas, we are going to take any focus off of toys, and gift lists, and focus on giving to and being kind to others, being grateful for our family and friends, and for this opportunity to be together here in Hong Kong. Oh — and the eggnog.