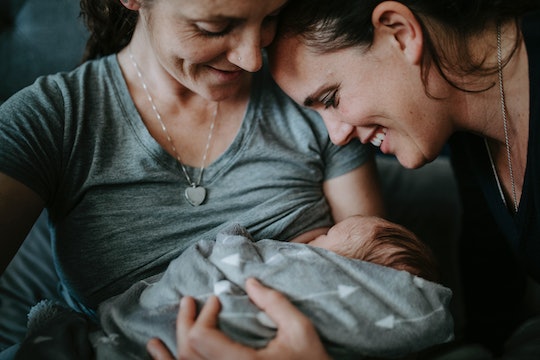 I Chose to Breastfeed, My Wife Didn't. Here's What I Learned.

I gave birth to our first child two weeks before Trump’s election. She arrived three weeks early, which led in part to our breastfeeding struggles.

In the first week we had her tongue tie and lip tie clipped. In the second week we added a nipple shield to try to get her to latch. In the third week I needed antibiotics for a uterine infection which set off a three-month cycle of passing thrush back and forth between baby’s mouth and my nipples causing me extreme pain to nurse. Between vasospasms, mastitis, and an exhausting cycle of pumping and bottle-feeding every three hours or less for four months before we finally achieved a latch that transferred milk, breastfeeding was one of the hardest full-time jobs of my life. I was longing to have my body become just mine again after eight debilitating months of nausea and daily vomiting that had left me bedridden and hospitalized while pregnant.

I pushed through at all costs. I blindly chose to keep going day after day at the expense of my mental health. After the first six months we finally got the hang of it and I did find enjoyment, fulfillment, and convenience from pain-free nursing. We lasted until my daughter turned away from the breast on her own at 15 months old. It was a hard-won achievement and I cried when it was over, for once because I would miss it.

My wife gave birth to our second child last year, and this time we watched a debate between 20 Democratic primary contenders from the hospital recovery room, instead of a Clinton-Trump debate we had seen in the recovery room the first time around. My wife tried breastfeeding, but chose to wean after one week so she could take the medication she needed for postpartum depression. That was it. Our baby has been formula-fed since then. Fin.

It was a shock, but pretty low on our list of concerns during the crisis mode of the first weeks of having an infant and preschooler. I was proud of her choice to put her mental health first and supported whatever she wanted to do with her body. When the dust settled, I started thinking, if I think it’s OK (not just OK, but really good) for her to prioritize her mental health over breastfeeding, why hadn’t I thought the same for myself when faced with the same decision three years earlier?

I would post about my struggles and nursing parents would tell me it’s OK to give myself permission to let this journey come to a close, but I couldn’t. How could I not be a breastfeeding mom?

I had prepared myself for parenthood by soaking in all of the internet’s eternal wisdom on everything from when to stop swaddling to when you can start giving Motrin to an infant. I knew the challenges that could make nursing parents throw in the towel and switch to formula, and I had decided I was going to be ready. I would recognize them and declare victory over them. I would be the best mom, which meant a breastfeeding mom. I wouldn’t be a statistic, a quitter. During those months when different moms told me they had stopped because of different obstacles like low supply or bloody nipples, I outwardly affirmed that fed was best, but internally felt superior because I had faced the same obstacles and overcome them. In my mind it was just a question of trying harder. I knew I was wrong for judging and I would have never said it out loud, but I still thought it.

When our second baby came, I quickly realized I didn’t know how to mother an infant without breastfeeding. When she cried I’d feel for a split second like I had the answer before remembering that I couldn’t just stick a boob in it to solve every need from hunger to pain to sleep to comfort. I would have to learn some new tricks. While for me breastfeeding had been important for bonding, I learned how important not breastfeeding was for my wife to bond with our new baby. Switching to formula gave my wife more sleep, less pressure and stress, and the ability to receive various treatments for postpartum depression, all of which have her the wherewithal to bond and nurture.

It was always OK that my wife had made her choice, but I still couldn’t bear to think someone would think I had made that choice.

I, on the other hand, floundered to find my way as a formula mom. Bonding without breastfeeding was a longer road to travel and my own postpartum depression set in. I felt like an inadequate mother when I couldn’t soothe this tiny stranger the only way I knew how. Formula feeding my baby in public, I would feel a twinge of shame, worrying that others were thinking of me what I had once thought of others. Logically I knew this choice was best for our family and everyone should do what was right for them, but our heads and our guts don’t always align. It was always OK that my wife had made her choice, but I still couldn’t bear to think someone would think I had made that choice. My standards for myself were different.

Becoming a formula mom freed me to see these standards for the B.S. they were. After trying for four months to be a stay-at-home mom of two, I realized it was not sustainable for my mental health — I needed breaks. Maybe others could do it, but it wasn’t for me, not unlike those formula-feeding moms I had judged three years earlier.

We hadn’t put our first in daycare for a year, but our feeding journey had taught me that not everything had to be the same for both kids and not every choice we made had to live up to our ideal of what parents should do or stick to our original plan. So Baby Two started going to daycare two days each week at five months old and hallelujah! It was the right choice for our family. I got the decrease in pressure and stress that my wife had gotten from weaning and I saw the light — parents prioritizing their mental health isn’t selfish, it’s necessary. Having some space allowed me to fall in love with my second baby… the one who I never nursed but will always nurture.