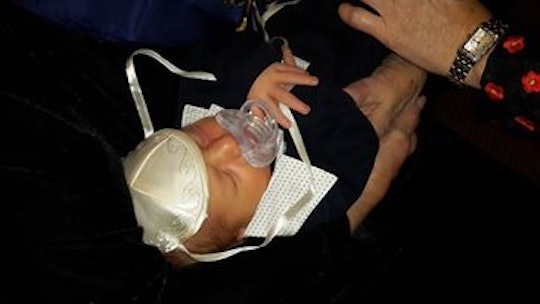 I Circumcised My Son, & I Don't Regret It One Bit

Eight days after my son, Sol, was born, my husband and I dressed him up in a one-piece suit, packed him into the carseat, and whisked him off to my grandmother's house, where my family members watched as a trained medical professional said some prayers, gave him a cloth soaked with Manischewitz, applied some numbing cream and antiseptic to his penis, and, with the deft hand of an old Italian master, quickly and quietly snipped off his foreskin. After the ceremony, my husband and I were given a handout of instructions for how to take care of his newly cut penis and asked if we wanted to keep the foreskin to bury underground, per Jewish tradition (we politely demurred). Then we went off to have bagels and mimosas with our family.

More Like This
5 Signs Your Baby Is Too Cold
Here's The Deal With Babies Who Sleep With Their Eyes Half Open
30 Vintage Photos Of Parents Giving Their Babies A Bottle
Um, "Rusty Pipe Syndrome" Is A Thing, & Every Breastfeeding Mom Should Know About It

I would be lying if I said I enjoyed watching my child get circumcised. (I forced myself to watch the whole thing, and as I later told my friends, the whole process was similar to watching a potato get peeled.) I'd be lying if I said that I enjoyed watching my baby cry, which he did, a little bit (although to be honest, he cries way more when he gets his nails clipped). I would also be lying if I said it would have been my first choice to have him circumcised in this fashion. Although my husband and I are agnostic, I belong to a tight-knit Jewish family, and had it not been immensely important to them that my child have a b'rit milah (the Hebrew term for the ancient rite), we probably would not have done it at all.

And yet, the more I read about the debate surrounding circumcision, particularly in the wake of increasing anti-Semitism throughout the world, the happier I am that I did it. Despite the growing belief among many mothers that male circumcision is brutal and unnecessary, I'm happy that I circumcised my son, and I don't regret for one second that I did it.

To be honest, I didn't think twice about my decision to circumcise my child until a few days ago, when I read about legislation in Norway proposing to ban the circumcision of male children under the age of 16. The proposal was sponsored by the Progress Party, a right-wing populist anti-immigration group that has also advocated for, among other things, a ban on the hijab. Jewish community leaders were apoplectic about the proposal, calling it yet another example of the growing anti-immigrant, Islamophobic, anti-Semitic sentiment that has been gripping the European Union over the past few years. Yet anti-circumcision advocates worldwide applauded it, accusing the Jewish community of using anti-Semitism as an excuse to further their pro-genital mutilation agenda.

I can't speak for my fellow Jews having a pro-genital mutilation agenda because, contrary to apparent popular belief, I don't belong to a shadowy cabal of hook-nosed, curly-haired globalists congregating in a secret volcano lair somewhere conspiring to control the IMF and cut baby penises. What I can say, however, is that there are legitimate reasons why some people, particularly Jews and Muslims, would want to circumcise their sons, and they are much more complex than many anti-circumcision advocates suggest. In fact, in the larger conversation about circumcision, Jews and Muslims are often left out of the discussion altogether.

"That's outrageous," my father-in-law said. "Are you really going to let the rabbi suck the blood out of your son's penis?"

For me, it wasn't even a question if I would circumcise my son. The only question was whether we would do it in a hospital setting or have a standard bris. When the first question my grandparents casually asked when I left the hospital was, "So, who do you want to invite to the bris?," it was clear we didn't have much choice in the matter.

Not everyone was on board with this decision. "That's outrageous," my father-in-law, who was born in Italy and raised Catholic, said. "Are you really going to let the rabbi suck the blood out of your son's penis?" (He was referring to metizitzah b'peh, an ancient circumcision practice that is only practiced by a tiny sect of ultra-Orthodox Jews and is now banned for obvious hygienic reasons.) When we explained that a doctor mohel would be performing the procedure and that he would not, in fact, be sucking his grandson's penis, he relaxed somewhat, but he still had to knock back two G&Ts before he arrived at the ceremony itself.

My decision to circumcise my child was, admittedly, somewhat influenced by convention: according to the Centers for Disease Control, about 81% of newborns undergo the procedure at birth, largely for hygienic reasons, and the practice is endorsed by the CDC (although there is some debate as to whether or not circumcision actually decreases the risk of a child contracting HPV and UTIs, as some have claimed). It also occurred to me that circumcising my child would likely decrease the risk of him being subject to locker room mockery, or, worse, to having his penis compared to a Sharpei by a cruel future sexual partner.

But ultimately, my decision to circumcise my child wasn't primarily motivated by the above reasons. Ultimately, I chose to circumcise him because he is a member of a religious minority that has been persecuted for millennia and continues to be persecuted today, and I don't ever want him to forget that.

When I had my baby, I was suddenly confronted with an onslaught of choices as to what from my own upbringing I wanted to pass on, and what I didn't. I generally had a wonderful childhood, but I knew there were certain things I didn't want to do to my kid that my parents did to me: I didn't want to ever spank my kid, for instance, nor did I necessarily want to let him watch There's Something About Mary at the age of 5, as my parents did. (There were a few awkward post-movie conversations about semen.)

There was one thing, however, that my parents instilled in me that I knew I wanted to instill in Sol: a respect for and awareness of the traditions of the Jewish faith that he had been lucky (or unlucky, depending on how you look at it) enough to have been born into. Because Jews have been driven out of other people's countries for millennia, we're more aware than most of the role history plays in instructing us how to prevent future calamity; the mantra "never again" has been rammed into our skulls since birth. And while I used to roll my eyes at my grandpa's' admonitions to not do things like eat bacon or marry a goy or else I'd let Hitler win again, recent world events have forced me to question whether he was actually wrong.

In the absence of tolerance and acceptance, I want my son to practice resistance, just by virtue of never forgetting who he is and where he comes from. I didn't circumcise him for religious or even hygienic reasons, but for overtly political ones.

In a world where anti-Semitism and Islamophobia are on the rise, where synagogues and mosques are regularly being sprayed with slurs and swastikas, where major political candidates spouting hateful invective is not just acceptable, but encouraged, I'm starting to think that it is more important than ever for my son to know who he is, and where he comes from. I want him to look between his legs and know that he is a member of the Jewish faith, and that by virtue of his birthright, he will forever be permanently marked as different — not better, not special, not "chosen," but different — and that there are many people around the world who will resent him for this difference.

In an ideal world, I would want my son to be able to travel anywhere in the world and feel safe and protected. But the list of countries that are actively trying to make him and other Jews feel otherwise is getting longer and longer. So in the absence of tolerance and acceptance, I want him to practice resistance, just by virtue of never forgetting who he is and where he comes from. I didn't circumcise him for religious or even hygienic reasons, but for overtly political ones.

I realize that there is a growing contingent of parents who think it is barbaric to circumcise a child, and that these people will view my decision to circumcise my child as a violation of his bodily autonomy. I know there are some people who think male circumcision for religious reasons is akin to female circumcision, even though the latter is a non-religious practice that is explicitly intended to render women devoid of any sexual sensation whatsoever, while there is no conclusive evidence that the former does anything of the kind. (Anecdotally speaking, I've dated both cut and uncut men, and while they had little else in common, they did both really, really enjoy getting blowjobs.)

If you don't want to circumcise your kid for the above reasons or any other, that's fine. But don't for a second feel like you are doing me or my kid or any other parent who decides to circumcise their child a favor by framing the decision to circumcise as a clear-cut (sorry) decision. Because it is not, just as most other parenting decisions are not. Tradition plays a role. Politics plays a role. Health and safety play a role. History plays a role. And if there is anything that the past six months or so should teach us, it's the danger of ignoring history.