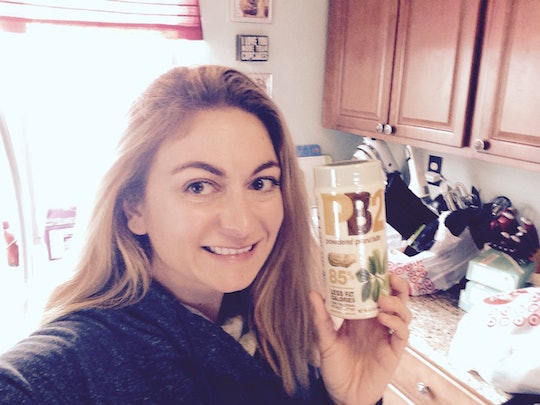 I Cooked With PB2 For A Week & This Is What Happened

I come from a long line of peanut butter addicts. So powerful is my family's penchant for PB that tradition dictates each child must pay a toll of two peanut butter cups to each grownup on Halloween, which I hated as a kid but now love as a mom who gets to reap the rewards. But while peanut butter may be the stuff that my dreams are made of, it's not the healthiest food out there, unless you swap out the jar for a powered peanut butter like PB2.

PB2 is made by pressing roasted peanuts to remove fat and oil until only a powder remains. PB2 claims to have 85 percent less fat calories than peanut butter. The average two tablespoons of peanut butter contains around 200 calories and 16 grams of fat, while two tablespoons of PB2 has only 45 calories and 1.5 grams of fat. While fat is an important part of a healthy diet, there can be too much of a good thing, so in theory PB2 is a great way for peanut butter fanatics like me to get their fix without having to adjust other parts of their diet to compensate for all that peanut butter.

Is PB2 the greatest thing to hit sliced bread, or is it too good to be true? I decided to test it and find out.

For one full week, I incorporated PB2 in at least one meal a day to see how it stacked up to traditional peanut butter. I even made an attempt to sneak it into my kids' routine as well. I wanted to see if the "substitute" (though it's really unfair to call it that), tasted better or worse than the real thing. Or did it taste exactly the same? Here's the good, the just OK, and the totally gross of how it went.

Day 1: The Head To Head Match Up

I know I can't be the only person on earth who enjoys snacking on a spoonful of peanut butter straight out of the jar, so I decided to start this experiment off with the basics. I compared eating a spoonful of creamy peanut butter to PB2, and instantly regretted it. PB2 on its own tastes OK, it's like a pixie-stick version of peanut butter, but the powder does not melt in your mouth like the competition.

In fact, the powder is very easy to accidentally inhale, which led to a coughing fit that took a giant glass of water to stop. Since sneaking off to the kitchen for a spoonful of PB is something I don't like to advertise to my kids, PB2 was a bust because they heard me coughing and came running to me. Sure, it was sweet, but it wasn't exactly the quiet moment of escape I was desperately hoping for.

My post-workout smoothie typically consists of water, two scoops of powdered chocolate protein, half of a frozen banana, a tablespoon of peanut butter, and a teaspoon of instant coffee. Today I swapped out the peanut butter for two tablespoons of PB2 to see how things went and if I noticed a difference in taste, texture, and flavor.

Maybe I was hungrier than usual after my run but this was the best smoothie I've had in a long time. The peanut butter flavor was great and even helped tamp down some of the chalky flavor of the protein powder. I didn't have to worry about the inhale factor since everything was blended together and all of the flavors had a chance to really mix. When it comes to smoothies, I'm sold on using PB2 instead of peanut butter from here on out.

You can't have a PB2 challenge without trying it in the classic application of a PB&J, right? Right. I followed the package directions of mixing two tablespoons PB2 with one tablespoon water and stirred it up. And yikes, what a disappointment.

Sorry PB2, but you're just not the same when spread over bread. The consistency of the PB2 mixture was slightly lumpy and didn't look at all appetizing. Upon tasting it, for the first time during this experiment it felt like I was having a peanut butter substitute instead of the real deal. And the substitute didn't come close to peanut butter — not by a long shot.

I had planned to give this to my 3 year old to see if he noticed the difference, but once I took a taste for myself, I couldn't do it. Maybe their reaction would've been funny, but not even Lady Tremaine would have fed this peanut butter imposter to Cinderella. (Trust me.)

Living with two preschoolers means chicken fingers are a staple on our dinner routine, but I decided to try this PB2 peanut sauce to dip them in instead of ketchup for a change.

While the kids we unimpressed, my partner and I couldn't get enough. Seriously! It was that good. We were so into it that I ran back into the kitchen mid-meal to make a second batch. It was creamy and felt flavored to perfection: not too thick or too runny so that you had to dip multiple times in order to get the flavor to stick. This stuff is amazing, and I'm actually looking forward to this week's chicken tender night instead of dreading it like I used to. Score another one for PB2.

One of my favorite afternoon snack is a creation I call "apple nachos": sliced apple sprinkled with cinnamon and melted peanut butter topped with a dollop of Cool Whip. It's healthy and tastes far more decadent than it actually is. But melting peanut butter to a pourable consistency without burning it is a skill I've yet to master, so I swapped out the creamy stuff for a spoonful of PB2, thinking this could make my afternoon routine easier and healthier.

Sadly, this is a situation where only true peanut butter will do, no impostors. While it tasted fine, talking while snacking led to me inhaling powdered peanut butter, which was not fun times. (Remember what happened on day one?) After giving this a solid effort — I tried! I swear! — I'm OK with sticking to the real stuff from now. I think my time is better spent figuring out the right microwave settings to melt it rather than inhaling powdered mixture by accident again and again and again.

I'm a big fan of Thai peanut chicken, but it's usually a weekend indulgence since it does tend to be a heavier meal. Given the thickness of peanut butter (even when paired with coconut milk), it's so heavy that I usually need to tap out for the night and just relax on the couch. But because I'd committed to trying new things this week (and to using peanut butter on everything), I decided to try this dish with PB2 to see if a lighter version would still taste as good.

I used the same Thai peanut chicken sauce recipe that I always used, but this time I whipped up the 1/4-cup of peanut butter using PB2 and water. This worked really well! In fact, it may have been even better than usual because the PB2 powder left the sauce tasting less greasy than it has in the past. Other than that, I honestly couldn't even tell the difference, even though I was on the lookout for any changes in taste, flavor, or texture.

It was so good that I'm really pumped that I can make a healthier version of this dish whenever the craving hits. Winner winner, chicken Thai dinner!

My kids always ask to bake on rainy days, so when it started to pour on day seven, I knew I had the perfect excuse to see how PB2 tasted in baked goods. I grabbed this PB2 chocolate chip cookie recipe and the preschooler who was more inclined to following direction this morning and got to work mixing. I followed the recipe to the letter, but my dough seemed a bit dry so I added a few tablespoons of apple sauce at the end, because it seemed like something The Pioneer Woman would do.

I snuck a taste of the dough before making the cookies and it was amazing: chocolatey and peanut buttery to the point where it could easily become a Zander home must-have. The cookies came out great: the peanut butter flavor was really subtle, but definitely present, and the cookies lacked the heavy, greasy feeling that can sometimes happen when you make cookies using jarred peanut butter.

I made them for the kids, and they didn't detect a flavor change either! (And that's saying something.) They had a couple throughout the day but honestly, my partner and I destroyed these while watching Netflix after the kids went to bed. I regret nothing.

While I won't be tossing out my jar of the creamy stuff anytime soon, PB2 is a great healthier alternative in certain applications. It's never going to replace my beloved jar of peanut butter completely, but when it comes to cooking, baking, and smoothies, consider me a PB2 convert. Like I mentioned, there was none of the extra grease that you often get when cooking with jarred peanut butter, and that made the meals lighter and more enjoyable. It felt good to eat foods that tasted great while knowing that I was making a healthier choice for my body at the same time. And the real kicker was that my kids didn't notice a flavor difference either.

Now if you'll excuse me, I see clouds rolling in, and I have some PB2 chocolate chip cookies to bake.