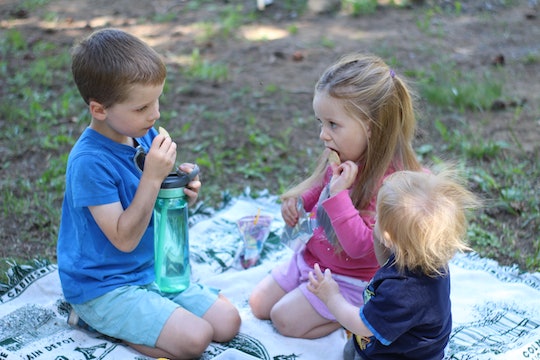 The One Reason Why I'll Never Be A Passive Parent

I took my three kids to the park the other day to beat the early onset of summer boredom. It was a park that was close to our new home, and I had never been there before. The climbing structure was magnificent: it was three stories high and fun as all hell. That was great for my older two kids, but as soon as my 2-year-old started climbing, I started to panic. The panic doubled when I realized there were tons of hidden nooks of the park, making it difficult to keep an eye on all three of my kids at once. Other moms at the park didn't seem to care. They just sat there and watched as their kids climbed and played. But I was a nervous wreck.

No matter how much of a concerted effort I make to be more laid back, to give my kids more freedom and autonomy, the truth is, I can’t hack it for long. When I let them run ahead of me, I'm constantly calculating how fast I can catch up to them if a stranger rounds a corner to grab them. I am hyper-vigilant about knowing where they are at all times, and when it takes me more than a split second to spot them, a brief wave of nausea rolls over me. I am constantly imagining them falling from play structures and breaking their necks, riding bikes into traffic and being hit by a car, or turning a corner without me and never being seen again.

Even when I know I am being too cautious and overprotective, I can’t shake the impulse to yell “be careful” on a loop. I find myself saying it more often than I say their names, even more often than I say “I love you.” It’s become an incantation, a prayer I recite in some vain attempt to keep the world from stealing them from me.

Sometimes, this impulse gets in the way of me making connections with other people. For instance, while we were at the playground, at one point another mom came to chat with me as my oldest son showed off his Lego car to her two sons. Our conversation was flowing smoothly, and I could feel the beginnings of a mom friendship on the horizon. We'd just moved, and I thought it would be wonderful to actually get to know someone in our neighborhood and have some more mom friends around.

I say "be careful" so often it's become an incantation, a prayer I recite in some vain attempt to keep the world from stealing my kids from me.

But then, in the midst of my mom-friend reverie, I saw my youngest start to ascend the ladder to the second level of the play structure. And I started freaking out. I had seen him climb it before, and I knew he rarely misstepped and had always caught himself. I tried to stay focused on our conversation while keeping tabs on him, but my heart was beating out of my chest the whole time. Even though he made it to the second story just fine, every time he got within a few feet of any opening he could fall from, my stomach lurched. I didn't hear a word the woman in front of me was saying. I was too busy convincing myself that my son was going to inexplicably decide to walk off the edge to his death.

I couldn't take it anymore. So I ran toward him, mid-sentence, to rescue him from himself. I scrambled up the ladder, yelling at him to stay away from the edge, not to climb the ladders, not to test his limits in any way. I was crazed with anxiety, placing my arms out as barriers. By the time I wrestled him down a slide with me, my potential mom-friend was gone . To be honest, I couldn’t blame her. If I had watched the scene I had just made, I wouldn’t want to be friends with me either.

I see my friends who are more passive parents. They're not constantly hovering over their kids and worrying about them, and I can’t help but feel jealous of them. Their children play and have fun without the incessant interruption of a parent watching over their every move. How free those kids must feel! How much lighter and more joyful! I know it would be better for my kids if I could chill out a little bit more, and yet it’s so hard to beat my anxiety.

I know I’ll never be a passive parent, but I hope someday, for my kids sake, I’ll learn to get a handle on my anxiety and let them experience the world firsthand.

I try to surround myself with more passive parents, hoping their laid-back parenting will eventually rub off on me. I give myself time frames where I don't allow myself to say “be careful,” at least when we’re out at social gatherings. I know I’ll never be a passive parent, but I hope someday, for my kids sake, I’ll learn to get a handle on my anxiety and let them experience the world firsthand.