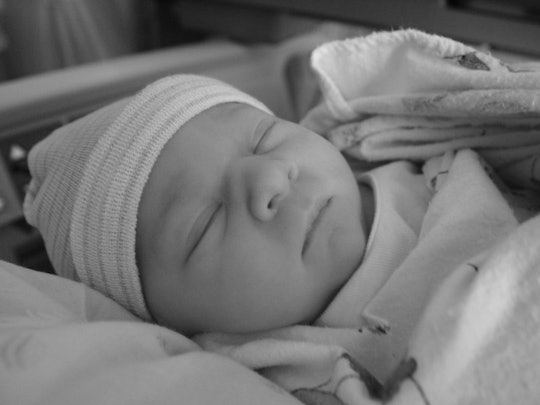 I Couldn't Have Given Birth Without My Midwife

When I got pregnant for the third time, I knew that I wanted a midwife. My previous two pregnancies had been attended by two different OBGYNs, neither of whom seemed to care much about my birth preferences. My births had felt like part of an assembly line, and I knew that for my third, I didn't want to be bullied into any procedures I didn't want, like an epidural or pitocin. I wanted to try for a drug-free birth, and I knew a midwife would advocate for me in the delivery room.

So immediately after I saw those two pink lines on the pregnancy test, I contacted a midwife. We spoke on the phone, and talking to her felt like I was talking to a friend. She wasn't rushed or impatient. She made me feel like a person, and I was immediately sure that she was the best choice for me. So I booked an appointment with her right away.

Unfortunately, when I went to meet my midwife for the first time, it wasn't to have my first ultrasound. I ultimately lost the pregnancy, and when I went to visit the midwife, she had to check to to make sure the miscarriage was complete. It wasn't the first meeting I had imagined, but my midwife was still everything I dreamed she would be. She was empathetic and kind and supportive. She answered all the questions I had about getting pregnant again without making me feel rushed. She allowed room for my grief as if she didn't have a million other things to do that day. She was wholly present for me. I couldn't have gotten through that pregnancy loss without her, and I knew there was no one else I would want with me if I did become pregnant again.

I returned to visit my midwife a few months later with a new pregnancy, which I was now able to be seen on the ultrasound. But this, too, was a false start. At my 12-week appointment, my midwife walked me through the worst news of my life: I had lost another baby.

Again, she sat quietly with me, long after the office had closed, as I waited for my husband. She offered me endless support in the coming weeks, waiting for me after my D&C (which had to be performed by an OBGYN) so she could check on me. She suggested support groups for women who had had a miscarriage, and she walked me through my options for getting pregnant again.

She never dismissed my anxiety or told me not to worry. Instead, she acknowledged my fears and offered what reassurances she could.

As soon as I became pregnant again, she rushed my prescription for progesterone, which is crucial to maintaining a healthy pregnancy. She allowed me to come in at 6 weeks instead of the standard 8 or 10 weeks to ease my fears. She never dismissed my anxiety or told me not to worry. Instead, she acknowledged my fears and offered what reassurances she could. As my pregnancy progressed, healthy and normal at long last, I felt deeply connected to my midwife. As my due date approached, I felt more excitement than fear at the thought of delivery with her on my team. She had seen me through the storm of two miscarriages, and finally, finally, she would be the one to see me through my birth.

When my due date arrived, I ate a plate of jalapeno poppers as a last-ditch attempt to induce labor "naturally." (I mean, how natural can frozen snack foods be, really?). I arrived at the hospital a few hours later, six centimeters dilated. The hospital called my midwife immediately, but before she arrived I had already ordered an epidural. The pain was too much. I had been laboring at home for hours. I was ready to be done. My husband wasn't helping, as hard as he tried, and I needed a break. I needed relief, and the moment my midwife swept through the doors I got it.

She had seen me through the storm of two miscarriages, and finally, finally, she would be the one to see me through my birth.

She brought with her the strong, calm presence I had been craving, as my husband and nurses had been bustling around in a frantic way. As another contraction hit, she moved my husband aside and guided me mindfully through the pain. For the first time during any of my births, I felt confident and in control. When the anesthesiologist arrived, she asked me if I really wanted to go through with the epidural, and I felt at ease saying that I wanted to labor without it for the time being.

Having her by my side, intervening on my behalf with all the preferences we had talked about before delivery, allowed me to focus solely on the act of giving birth. She gave me the birth experience I had always craved, and didn't believe possible — one that focused on me and my baby, instead of simply moving me along the hospital line.

Having my midwife there helped me find my voice during birth, and I cannot imagine having gone through that experience without her.

I still wanted an epidural at the very end for pushing, and I felt wholly comfortable and confident in my decision instead of bullied or frightened into it, as I had been with my previous two births. Having my midwife there helped me find my voice during birth, and I cannot imagine having gone through that experience without her. I would choose her a thousand times over again, and I will never forget the deep impact she had, not only on my last birth, but my life.