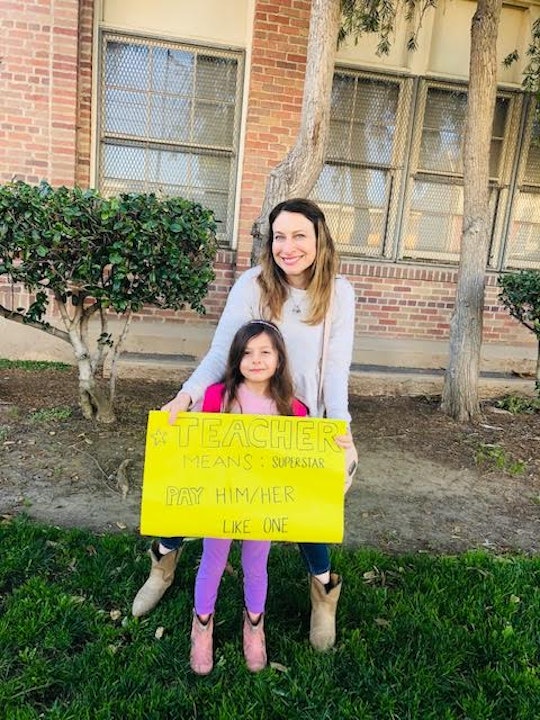 Why I Don't Regret Crossing The Picket Line During The L.A. Teacher's Strike

In sunny Los Angeles this morning, you could hear the parental sigh of relief. Kids went to back to their regular classrooms after a historic teacher's strike concluded. Moms like me, raised by liberals from Berkeley, knew what this strike meant: Supporting middle-class workers who are the backbone of our city. And yet, I crossed the picket line to take my daughter to school during the strike — and guess what? I don't regret it for a second.

Let me back up. Like most local parents in what the Los Angeles Times has noted is the second-largest school district in the country, things aren't easy. With three girls ages 7, 12, and 13, I'm also lead parent of my family (I'm sure my husband would agree) and charged with finding a good academic fit for various ages and personalities.

My older daughter craved super-charged academics, so she went to a specialized program. My middle kid decided to work on her filmmaking and math, and gets to do both at her school. Meanwhile, Grace, 7, got in by lottery to an independent charter school 15 minutes from home.

The charter school receives funding from the state, but it did not participate in the strike and is not mandatorily affiliated with United Teachers Los Angeles — the union whose bargaining power to walk off the job, demand a raise, and better work conditions, including smaller classes, I applaud.

Which put me in the unique position of having to having to cross a picket line, something I don't believe in, to take my child to a school I do believe in.

LAUSD has classes climbing into the 40s or even more, from what I see and hear. Facilities are old: There are no ice packs, so kids who get hurt use a wet, frozen sponge, but can't necessarily see a nurse, since there aren't many left. It doesn't take a genius to see if there is money for schools, it isn't hiding in these campuses.

UTLA teachers weren't wrong in telling me last week that they're expected to do a great job on no resources. It's ridiculous, and it's wrong.

If I were running things, LAUSD's shiny high rise in re-gentrified Downtown L.A. would be sold, the money sent straight to the rundown, chain-linked campuses. Administrators would be sent to work at the schools, rather than in offices far away. Let them set up a desk in the multipurpose room, or the abandoned library. (When I toured my neighborhood school, volumes were collecting dust; kids hadn't been allowed in since the librarian was laid off.)

But part of UTLA's ire during the strike was laser-focused on charter schools. I heard friends and teachers chanting about "rich, white charter schools" where only the brightest kids are "hand-selected" to make test scores higher, and that if you go to a charter, you are "crooked and allied with Betsy DeVos."

Wow. I'm not a fan of Ms. DeVos personally and my kid's charter is full of kids from all over who didn't even start Kinder last year speaking English. Grace's friends' families are from Korea, Mexico, Australia, and Sweden, with varying income levels.

All of them, like me, were attracted to the charter school's lower class sizes, plus the ability to teach more creatively. If the school wants to teach about China using a food festival with chopsticks, it can. My friend's kids' schools don't seem to be able to do those things.

We also don't have a library at Grace's school, by the way, or the much-longed-for ice packs. And just to be clear, I have never heard of a charter school hand-picking kids for test scores. In fact, our school is possibly less academic than an LAUSD one, and tests and hours of homework are not a thing.

Charter schools are not L.A.'s enemy. The real devil is not one side of the Los Angeles Unified School District versus the other, but a lack of interest in better public education in general.

The teachers on the picket line outside Grace's school told me point-blank that until I'm ready to put my kid in one of their (non-charter) schools, I'm their problem. I respectfully, and completely, disagree.

Trying to take the choice of schools away from me — so that I can only go to the one down the block, say — won't do anything but make me disenfranchised. It's hard enough to donate — and help out — with three schools as it is. The last thing I would think a school system would want is to turn away involved parents like yours truly.

The real problem is actually a question. A question of what we value as a society. If parents were to unite in their conviction that education is top priority, change would come once and for all.

Until then, I've retired the yellow sign I made to march Grace into school, that says teachers (as in all teachers) are superstars. I would wave it as we crossed the picket line last week, my own way of showing support for all the schools my kids attend, and everyone involved.

As the teachers chanted as we walked down the sidewalk during the strike, I would imagine a world in which learning is more valued than, say, a wall, or a war, or fighting between political parties. Now, that's a movement I'll join. And I will never, ever cross that picket line.