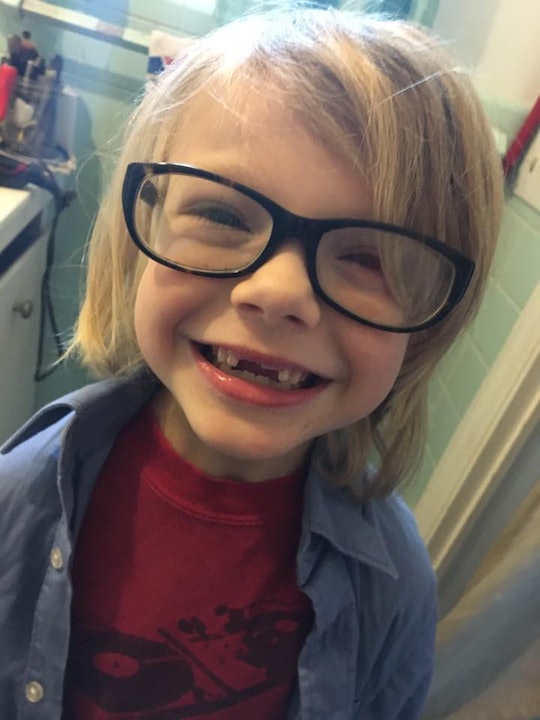 Two hours after my husband left on a weekend trip, I went to the ATM to activate the new card. When I got home, I realized I'd left it in the machine. This left me with no money for an entire weekend, as well as a deep sense of personal shame. I tried to hold it together for my three boys. But finally, I couldn’t do it anymore. I burst into tears. “I am such an idiot!” I said, over and over. I finally just put on some TV for them and retreated to the bedroom, where I dramatically draped myself over the bed and wept copiously, like an extra on a CW TV show. It wasn't the first time they'd seen me cry. I cry in front of my kids every once in a while. But I definitely felt self-conscious about it.

Eventually, my 7-year-old eventually came over and tapped me on the shoulder. “I love you, Mama,” he said. Then he handed me a drawing. It read “YOU R NOT U IDEOT FRUM BLAISE." I sat up and wiped my eyes. I hugged him. “Thanks, Blaise,” I said. “That makes me feel a lot better.”

And it did make me feel better. The picture was cute, of course, but it was his compassion that really touched me. It not only made me realize that I wasn't an idiot, and that I was entitled to a slip-up every now and then. It also made me realize that by crying in front him, I gave Blaise an opportunity to show his compassion. He saw me suffering, recognized it for what it was, and decided to do something about it. Those are sophisticated skills for a 7-year-old to learn. Most of all, he saw that he could have some impact on the world, even at age 7. He saw that his actions have consequences, and they can make other people feel better. These are all important lessons that I want him to learn.

I rarely saw my parents cry in front of me. I saw my mom cry only once. She was a teacher, and one of her students had died. I was 12 years old, and I found the experience disquieting. I didn’t know what to do, so I left. I generally reacted that way to other people's tears until I had children. And because my parents never cried in front of me, I looked down on my friends who let their kids see their tears. How could you do that to the poor kid, I thought. How could you put that on them?

It wasn't until recently that I changed my mind.

My tears didn't seem to scare my son. He accepted them, just the way I accept his tears, and he offered me comfort in the best way that he knew how.

I suffer from several mental illnesses, and recently, one of them reared its ugly head after I stopped taking one of my drugs. I truly wanted to die. I thought my kids and husband would be better off without me, and the thought hurt so bad. I ended up howling in the bathroom, while my husband attempted to comfort me. I rested my head against the white molding and sobbed and sobbed. I knew the kids could hear me across the house, but I couldn’t bring myself to care.

Blaise brought me a picture. On it, he’d drawn “I LOVE MAMA” and some of what he thinks are my favorite things, including a whale, a flying fish, and an octopus. It took so much thought, and so much work on his part. My tears didn't seem to scare him. He accepted them, just the way I accept his tears, and offered me comfort in the best way that he knew how. He sublimates his own discomfort to help other people. That’s a skill I want my kids to learn.

I homeschool my kids, and I had a tough time teaching them about the Civil Rights Movement and Native American history. When I pulled out a new book, Blaise would ask, “Is this one going to make you cry?” And when it did, he'd sort of roll his eyes. “I want you to stop so we could read more things,” he'd say. Even though he wasn't all that sensitive about it, he did see that his mother felt that the plight of minorities was important enough, and sad enough, to cry about. I want him to carry that lesson for the rest of his life.

I want my kids to know it’s OK to cry in front of other people, especially because they're boys in a society that encourages men to suppress their emotions. I want them to know it's OK to cry in general, and that emotions aren’t shameful.

Of course, I still try very hard not to cry in front of my kids. I don’t want to weep all over the place all the time. I don’t think that’s healthy, because then the child begins to feel responsible for the adult’s emotions, and that's not OK. Instead, I want Blaise to see me cry at important times: when I’m having a mental health breakdown, for instance, so he can learn not only that he can help make me feel better, but that mental breakdowns happen, and mental health difficulties aren’t something to be afraid of.

My two younger children mostly ignore my crying, which is for the best — I try not to do it too often in front of them anyway, as I think they're too young to understand. And if Blaise showed signs of serious discomfort or fear when I acted emotionally in front of him, I would stop.

But when something really bad happens, I want my kids to know it’s OK to cry in front of other people, especially because they're boys in a society that encourages men to suppress their emotions. I want them to know it's OK to cry in general and emotions aren’t shameful. I also want them to know that they can help people who are suffering, by drawing them a picture or giving them a hug. It’s an important lesson, and it outweighs any embarrassment or shame I might feel about crying in front of my kids. I think the positive lessons they learn far outweigh the potential negative effects.