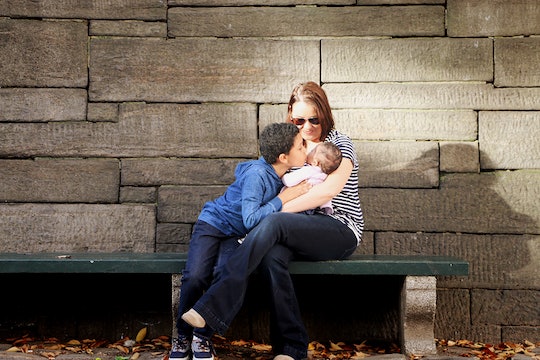 Yes, I F*cking Curse In Front Of My Kids

Motherhood is magical. But motherhood can also make you want to lock yourself in a room and scream obscenities. I love being a mom, and my family is my whole world. But that doesn’t mean that I handle every situation perfectly. Sometimes my kids stress me out, or the world stresses me out, or I just get excited about something, so I curse. To me, cursing is a part of life and nothing to really cause a big fuss over, so yes, sometimes, I curse in front of my kids, and I don’t really give a f*ck if you want to judge me for it.

I remember the moment that I discovered what effect curse words could have on people. I was in the third grade. I'd heard profanity in various movies, or when my own parents let a four-letter word or two slip from time to time. One day, I was hanging out with a super religious friend of mine when I started letting them rip. She was shocked, but I realized pretty quickly that I wasn’t going to be struck down by the spirits above just for saying a bad word.

During my high school and college years, I never cursed in excess — only when I was having a bad day, or something happened that scared or shocked me. Then I married a soldier when I was 20 years old, and all of my self-restraint went to sh*t. In the military, everyone curses constantly. It's just part of the culture. So I picked up on it a bit, too.

I got pregnant shortly after we got married, in typical military fashion. (Young soldiers have a reputation for knocking up their wives almost immediately.) It never crossed my mind for one second to shield my son from his parents' cursing. The only time I would tell my husband to stop cursing in front of our son was when he would start telling a story and add the word “f*cking” before every noun, as soldiers often do.

We talk to our son like he's an adult, and guess what? Adults sometimes curse.

Of course, there are curse words that we won't say in our home. I'm not a fan of racial slurs, using God's name in vain, or the c-word. Those words are totally inappropriate and I won't stand for them in my home. But for the most part, we talk to our son like he's an adult, and guess what? Adults sometimes curse.

In fact, I think talking to our son like he's a grown-up has served his vocabulary for the better. He uses words that I certainly didn’t use when I was in third grade. But he rarely uses "the bad words" in public, because we do our part to make sure he doesn't repeat them.

I don't believe cursing has a negative impact on my child, and I'm not the only person who feels that way. Last year, the LA Times published an op-ed by Benjamin Bergen, a professor of cognitive science at UC San Diego and author of What the F: What Swearing Reveals About our Language, Our Brains, and Ourselves. In a recent study of 143 middle school students, Bergen found that homophobic slurs have a negative effect on children — but cursing doesn't.

"There’s no similar proof that exposure to ordinary profanity — four-letter words — causes any sort of direct harm: no increased aggression, stunted vocabulary, numbed emotions or anything else," he wrote.

Of course, occasionally I worry that my son will develop a habit of cursing. There was one time when my son did curse in front of us. He was 4 years old and we were walking from our parking garage to our New York City apartment. It was winter, and the ground was incredibly icy. Just as my husband warned us to be careful, our little guy’s feet fell out from underneath him as he hit a patch of black ice and the words “Holy sh*t” flew out of his mouth. My husband and I weren't mad. On the contrary, I almost peed my pants from laughing on the way home.

In my opinion, a little cursing never hurt anyone.

We did have a situation a few months ago where the bus driver let my husband and I know that our little guy was cursing with his friends during their ride home from school. When we talked to him about it, he said he did it because the older kids on the bus were saying those words, and he wanted to be cool like them — not because he had overheard the words from us. So why should I feel guilty about saying words that he's just going to overhear from the older kids, anyway?

In my opinion, a little cursing never hurt anyone. If anything, it helps you release some bottled-up aggression. I’m not going to censor myself, because I know that it’s not going to cause any type of lasting damage. Cursing in front of my kids isn’t going to make them grow up to be horrible human beings, and it most definitely doesn't make me a bad mom. And by the way, anyone who says they’ve never, ever cursed in front of their children is probably lying.