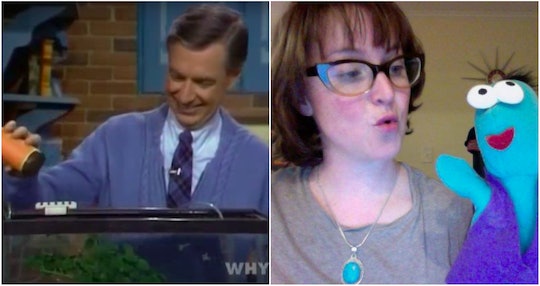 I Dealt With Postpartum Panic Attacks By Channeling Mister Rogers

Any parent who has spent time at home caring for their children (which is to say: every parent I have ever met) knows the feeling of being marooned. On the longest days, you feel like you missed the ferry back to the mainland where everyone else is busy hula-hooping, umbrella drinks in hand, while you are standing at the edge of the island yelling "WAIT! You forgot me! What am I supposed to do with these children, when all I have are this Dora puzzle and half a mini-bag of Cheez-Its to get us through the day?!" During the spring when my son was a baby and my daughter was 3 years old, the feeling of being marooned was a constant, unwelcome companion. My panic attacks returned postpartum, and, weirdly, the one thing that saved me was Mister Rogers.

The late Fred Rogers, who spearheaded the TV show Mister Rogers’ Neighborhood, the jingle of which is already playing in your head, was a pioneer in children’s programming. I truly believe his approach to puppeteering may have been life-saving for my children and me during a hard season for this mama’s mental health.

Prior to being home with the kids full-time, I had been teaching adjunct at a local community college and juggling some freelance writing gigs. The rhythm of working part-time suited me and energized me to be the best mother I could be when I wasn’t teaching and writing. That spring, though, I decided not to teach at all because our family was preparing to move across the country. I needed to get our home ready to show to potential renters. I needed to pack our life into boxes. And with the transition came the panic attacks.

When I had my son, I failed to take my medication regularly. I was sleep-deprived and nursing constantly, so I sloppily weaned myself off the meds... The panic attacks came rushing back.

I had suffered panic attacks when I was in college, but they were infrequent and usually went away after a good cry with a friend. After I had my daughter, though, the panic attacks returned, both provoked and unprovoked. I put myself in treatment, had a great therapist, got regulated with some medication and all was well.

When I had my son, though, I failed to take my medication regularly. I was sleep-deprived and nursing constantly, so I sloppily weaned myself off the meds, which I would not recommend to anyone. The panic attacks came rushing back, full-throttle. We’re talking hands-clammy, heart racing, voice-lifting, near-hyperventilating panic attacks. When I consulted Dr. Internet, she told me that most people's panic attacks only lasted about 10 minutes. Oh really? So the ones I kept having from the cereal aisle in the grocery store that lasted FOUR SOLID HOURS LATER to when I was trying to make dinner and couldn’t find the — what’s that thing called again?!! that flipping flip flipper thingy that flips things? OH, A SPATULA — those should only have been lasting ten minutes?

I put myself back in treatment and got a prescription for a new medication. The ramp-up time for any selective serotonin re-uptake inhibitor (SSRI) medication varies with each person. While I waited for the new medication to kick in, I tried to soldier through. My husband was working three jobs so that I could stay home with our children. Most days and nights, I was parenting solo. Needless to say, these were some wobbly weeks for my mental health. Simple tasks, like packing a diaper bag to go to the park, loomed large and near-impossible. I would get irritated with my daughter for being too loud, too squirmy, too dancey— for essentially being a toddler.

Fortunately, I was equipped with a toolkit born of my early education from Mister Rogers. Everyone who has ever watched the show knows that the best part is when he visits the Land of Make-Believe, where adult humans interact playfully with beloved puppets such as Daniel Tiger and King Friday XVIII.

According to Hedda Sharapan, a senior fellow at the Fred Rogers Center at St. Vincent College, Fred Rogers was “always enamored with puppets, so when he was a graduate student in Child Development, they were a natural tool for him to use with small groups of children.” This tool was one of the few that was readily available to me in my panic-attack valley of parenting.

Normal narrated things, especially when my daughter was getting a little testy and her mother had about four seconds of Good Mama left before Crazy Impatient Mama took over.

Reaching into our toy box one day, I found a very special pack of felt puppets with interchangeable facial features that velcroed on and off. I constructed one with a turquoise face, and a wild spiky shock of jet black hair. He had Muppet-like eyes and a permanent grin. We actually named the puppet Normal before I started having these episodes. (No judgements.)

Normal did a lot of the heavy lifting of parenting in those days. Normal narrated things, especially when my daughter was getting a little testy and her mother had about four seconds of Good Mama left before Crazy Impatient Mama took over. Normal was great with transitions and could preempt meltdowns simply by singing in his signature warbly voice, “Attention all children, please clean up so we aren’t late for our doctor’s appointment!” He made the banal events happening on the Island of Parenting Small Children seem sort of fun.

During a time when I was nursing my son around the clock and being touched by anyone else felt like a punishment, my daughter still got plenty of hugs and love.

I can imagine what the skeptics might say about parenting with a puppet. They might condemn puppeteering as a sort of phoning in of parenthood or a disruptor of the genuine bond with one’s child(ren). The critique is fair and I wouldn’t recommend it as the only means by which one speaks to their toddlers. Still, during a time when I was nursing my son around the clock and being touched by anyone else felt like a punishment, my daughter still got plenty of hugs and love. Normal liked to make up songs and Normal had a penchant for laughter and Normal loved hugs. And my daughter liked to hug Normal back. When the woman operating said puppet was overtired and underfed, Normal kept things upbeat.

I was channeling Mister Rogers and there was no shame in my game. “Fred also saw how children seem to trust puppets, maybe because they're childlike and non-threatening. At a safe distance, an arm's length away from the puppeteer, children tend to confide in a puppet, saying things they might not tell an adult,” wrote Sharapan.

When we packed up our lives and moved from that house, Normal seemed to “go missing.” By that point, my overall mental health was stabilizing and my sleep wasn’t as disrupted. We didn’t need Normal anymore, but I am grateful for his service to our family. I had left the island of abandonment and was headed toward the mainland once more. Best of all, I felt hopeful for our future.

Someday, I'm sure my kids will laugh and throw me under the bus telling their friends about how looney their mother was, and how she had this puppet named Normal and how every time my daughter saw that hideous puppet come out of the closet, she knew there was going to be some crazymaking.

And that? Will be totally normal for me.