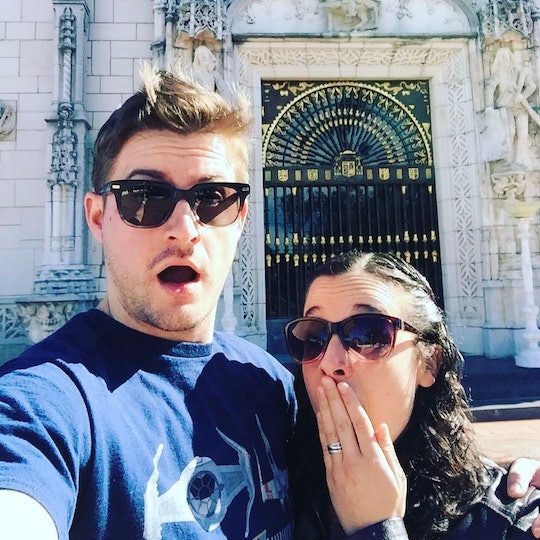 I Described My Period In Detail To My Boyfriend

They say as a relationship matures, so do the people in it. And, despite our mutual love of "that's what she said" jokes, I like to think my boyfriend and I have developed into a mature couple. Throughout the course of our relationship, we've reached a place where our conversations are open, honest, and free from censorship. But, having been together for more than two years, I wondered just how comfortable we were with each other. So, in an attempt to test the waters, I decided to describe my period to my boyfriend and see how he would react.

At first, I didn't think much of talking to my boyfriend about my period. Probably because we are a fairly gross duo. In the beginning of our relationship I tried to present myself as a well-mannered woman who faked her way through finishing school. But, because I suffer from gastroesophageal reflux disease, I burp a lot. And I'm not talking about tiny burps that some people find adorable. I'm talking the loud, echoing belches you only hear after an animated character has downed a can of soda in 10 seconds. It only took two dates before one of those belches escaped my mouth and broke down the etiquette wall between us. Ever since that day, our relationship has been filled with booming burps, foul-smelling farts, and more than a few conversations about poop. What can I say, we're a different kind of nauseating couple.

Also, it's not like my period hasn't come up in conversation before. There have been many times when he's tried to initiate sex, only to go soft the minute I say, "Sorry bro. It's my time of the month." Also, having recently moved in together, he's seen more than a few dirty tampons in the bathroom trash can. (Seriously, am I the only person whose tampon manage to escape the toilet paper swaddle I create before tossing them out?) But there's a big difference between knowing your partner is on her period and knowing the details of her period. It's that whole "knowing how the sausage gets made" mentality, only in this case, the making of the sausage is the shedding of my uterine lining.

The timing of my experiment couldn't have been more perfect. My period arrived the day before we embarked on a cross-country flight and road trip down the Pacific Coast Highway. We were about to be in cramped quarters, and one of us would be dealing with cramps during that time. If we could get through a talk about my symptoms and five-day adventure, then we could survive anything. Right?

I went into this conversation worried about how my boyfriend would react and what he would think about my period, but maybe the problem isn't what men think about periods. Maybe it's the way women have been taught to think about their own periods.

As we sat on the couch, enjoying some pre-packing Jeopardy, I casually said, "ugh, I got my period today. I feel so bloated." A softball of a convo starter, sure, but still something that may get a reaction. "I'm sorry, babe," he said. "That sucks." OK, not a dramatic reaction, but I also didn't say anything too graphic. I decided to press on and be a little more descriptive.

"Yeah," I continued. "I got it at work. I just went to pee and — boom — there's blood all over the toilet paper. Of course, I didn't have a tampon on me so I had to text my co-worker and ask her to bring me one."

Here it comes, I thought. He's going to wince and throw down the TMI card.

"Good thing you keep some in your bag," he said.

Really?! I get graphic and all I receive is praise for my Girl Scout-like preparedness? Clearly my boyfriend's tolerance was higher than expected. It was at that moment I knew I had to pull out all the stops and go into intense detail.

Why should a woman's period be treated like a covert CIA mission?

"Yeah but that doesn't help when your flow is heavy as f*ck," I said. "I swear every time I went to pee, blood would just drip from the tampon. And then, when I went to change it, there'd be clumps of some brown slime-like substance on the tampon. Freakin' discharge." I stared at my boyfriend from the corner of my eye, and not even a flinch. He clearly came to the conversation to play, and it was time for me to throw the curve ball.

"And the smell," I said. "The way you vagina smells during your period is rank. It's not like the scent of regular blood. It's that, plus the day-old gym socks you let sit a little too long in your bag."

I waited, secretly wishing he'd beg me not to say another word about my period. Instead, he nodded his head and expressed more sympathy for my situation. It was in that moment I realized something. (And not that I have an amazing boyfriend, as that fact has been pointed out time and time again.) I went into this conversation worried about how my boyfriend would react and what he would think about my period, but maybe the problem isn't what men think about periods. Maybe it's the way women have been taught to think about their own periods.

From a young age, girls are taught that their period is something they should be ashamed of and keep a secret. This starts with schools separating the boys from girls when it comes time to teach sex education. Although this method may make students more comfortable, Puberty Curriculum noted that there are many cons to gender-segregated sex education. Among them, the main con is the idea that it perpetuates the stigma surrounding sex, reproduction, and menstruation.

But teachers aren't the only ones to blame for the stigma. The media has played a huge part in making girls feel like they should hide their periods form the world. A Google search for "how to hide your tampon" yields roughly 720,000 results, while a similar search for "terms for your period" spits out more than 35,000,000 articles. But why should a woman's period be treated like a covert CIA mission with codes and expertly crafted maneuvers? Why should women have to hide something that is so natural?

The answer? We shouldn't, but we feel the need to. I myself have fallen victim to the stigma. Even as I wrote this piece I had to make a conscious effort not to write "Aunt Flo." Luckily, many women are trying to take the shame out of periods. In August 2015, People.com reported on Kiran Gandhi, a woman who ran the London Marathon without a tampon to encourage woman not to be embarrassed about their periods. Last March, three women filed a lawsuit against New York's tax department over the Tampon Tax. According to CNN, the women wanted New York state to remove its 4 percent luxury tax on feminine hygiene products. Their efforts, along with many other protests, led to the repeal of the New York Tampon Tax in July, according to Newsweek.

As politicians continue to police women's bodies, it's important that women become comfortable with their period and bodies. Because in doing so, they'll be able to fight for the reproductive rights they hold so dear. So stop using euphemisms for "vagina," and call that glorious genitalia by its name. Stop hiding your tampons when you go to the bathroom, and let the whole office know you're menstruating. Stop being ashamed of something so natural, and embrace that time of of the month.

And if you get to the point where you can have a casual conversation about your period with your boyfriend, your girlfriend, or any other partner, well then that's just a bonus.