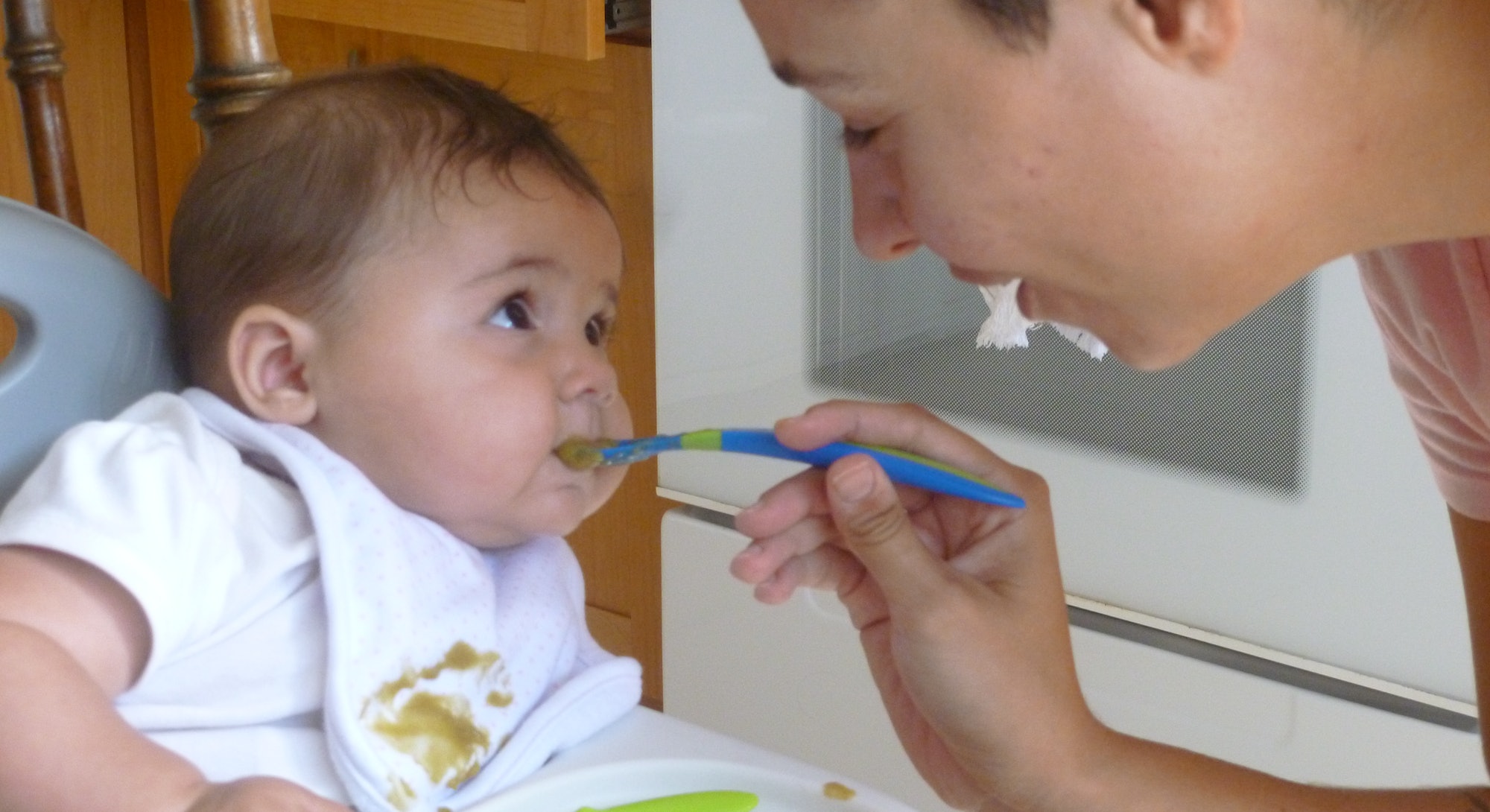 I Chose Not To Breastfeed, And So Can You

I always knew I didn’t want to breastfeed. When I was pregnant, I tried to keep an open mind, because, like everyone, I’d heard the pro-breastfeeding arguments echoing from on high: Breast is best. Breast milk makes your baby better, faster, stronger. But I knew that breastfeeding meant I'd have to feed my baby around the clock. For me, sleep deprivation leads to anxiety, anger, and sometimes depression, and I didn't want to be the only person responsible for feeding my baby at all times. My husband wanted to share exactly half of all co-parenting responsibilities, up to and including feeding, and that was just fine with me.

It's hard to articulate exactly why I was so averse to nursing from the beginning, but in light of my history of anxiety and depression, I couldn't picture breastfeeding my baby around the clock and being mentally healthy at the same time. And besides, didn't my baby need my health and happiness more than she needed my milk?

I decided that unless my baby was born prematurely, I wouldn't breastfeed. After all, I chose to conceive her, shelter her, and give birth to her — if I didn't nurse, that would be my choice, too. But almost immediately, I felt guilty about my decision.

When I was still pregnant, and I toured the hospital where I planned to give birth, the first thing I noticed was the whiteboard behind reception: 98% of moms successfully breastfeeding this month. A lactation specialist conducted the tour, preaching breast milk like gospel. She handed us an Infant Feeding Guide. Apparently, breastfeeding prevented diabetes, meningitis, pneumonia, learning disabilities, multiple sclerosis, schizophrenia, and death. I felt like I was a monster if I didn't breastfeed my daughter.

I tearfully asked my husband, who used to work in science publishing, to evaluate the research. Afterwards, he explained that many of those studies were methodologically flawed, failing to control for confounding factors like class, education level, and income. Intellectually, I understood this, but I kept right on crying, struck dumb by the hospital’s list of horrors.

Then I noticed a single, strange note at the end of the list — breastfeeding will save you over $3,000 a year! — and my heart froze around the edges. The pamphlet was working so hard to convince me that breastfeeding was in my best interest. It all felt like propaganda. Suddenly, I saw the "breast is best" messaging with fresh eyes. As a biracial woman, I'm probably more skeptical than most of essentializing scientific claims like that; black women are very aware that medical institutions don’t always have our best interests at heart. The immense pressure to breastfeed seemed like yet another way for society to control my body and pressure me to do what I was told.

My tears turned to anger. The women in my family haven't forgotten that black women were once forced to be wet nurses, and that our most intimate gifts, the ability to produce breast milk, once belonged to someone else. My bones, muscles, and nerves knew that freedom, ultimately, is located in my body, and I recognized threats of learning disabilities and multiple sclerosis as subtle shackles.

So I threw the Infant Feeding Guide away.

For the record, I think breastfeeding is beautiful — when it makes mothers happy. When it fulfills them. When it doesn’t leave them feeling like a ghost. But that wasn't how it worked out for me.

After a 19-hour labor, I announced I wasn’t planning on breastfeeding. Looks flew across the room, and the gears of my baby-friendly hospital ground to life. (I didn't know it then, but the baby-friendly hospital initiative, a joint project of the World Health Organization and Unicef, offers accreditation and millions of dollars in funding to hospitals that train staff and adopt protocols to become "centers of breastfeeding support.") The nurses convinced me to try to breastfeed, and I told myself that if it felt magical, if it felt right, I’d change course.

My daughter Clara and I struggled immediately. My exhaustion and pain didn’t seem to matter to anyone. Every hour on the hour, a lactation specialist or nurse arrived to manhandle my tender breasts. They tried to force my body to behave. I begged for a nipple shield, because I was cracked and bleeding, but they withheld it. “Studies have shown that women who use shields don’t breastfeed as long,” they said.

Each time I complained of excruciating, bone-ringing pain, the lactation consultants blamed the latch. Lactation consultants and nurses filed in one after another, like they’d been stuffed inside a clown car, waiting to see The Woman Who Couldn’t Handle Breastfeeding. Eventually, a middle-aged nurse looked me in the eyes and said, “Look, being a mom is hard. It’s going to hurt.” My husband, who so wanted to share exactly half of all parenting responsibilities, watched with horror, because he couldn’t share the pain or the shame with me.

So the day passed. And the night. As the clock inched towards the hour when I had to bring her to my breast, I began to fear my infant daughter.

This isn’t me, I thought. This isn't right.

Ironically, it was an arrogant young nurse who ended up releasing me from the notion that I was somehow obligated to breastfeed. “There’s nothing wrong with the latch,” she sneered. “I think your problem’s psychological.”

“You’re right.” I pried my baby from my chest. “You’re so right.” I told her to bring me formula, because I was finally done. By that point, my body was fighting an infection, and after an overnight induction, followed by a day and night of labor and a night of recovery, I hadn't slept in 36 hours. And we still had one night left to go. I was fed up.

Because the hospital was a BFHI, however, I was told I would not receive formula unless there was a medical reason for them to give it to me. Even if the latch was painful, the hospital pediatrician told me, my baby was getting the tiny swallows of colostrum she needed. I didn't entirely believe her.

I’m not proud of what happened next. Or maybe I am. Later I learned that some babies approach starvation as a result of harsh policies that convince women they must breastfeed at all costs. My husband literally ran to a nearby CVS for formula, and I snuck my baby sips while he stood guard. I felt like a criminal. I wasn’t afraid of the nurses, so much as I feared the waiver, the paper that would hold my disobedient body responsible, should Clara succumb to the Sudden Infant Death the waiver warned of. When the nurses came to ask, brightly, how breastfeeding was going, I lied. And lied. And lied.

To this day, I don’t know if they believed me, or just decided to count me among the successful 98%, and let it go. But I do know we left the hospital traumatized and shaken, feeling like fugitives of a nightmare.

At home, we taught ourselves to make and sanitize our daughter’s bottles. For months, I ordered formula online, too ashamed to go to the store.

My OB called to check in. “How’s breastfeeding going?”

My throat closed up. The terror of that final night, spent lying to medical professionals and drowning in shame, will haunt me forever.

“You know,” she said, “I once had a triathlete for a patient. She couldn’t breastfeed. She said it was too painful.”

Breath whooshed out of me. “They told me it’s supposed to hurt.”

“I’ve seen these fads come and go," she said. "People like to push moms around. Whenever they try to push you, hear my voice in your head, and do what makes you happy.”

I know that our culture wants me to feel bad about the fact that I didn't breastfeed, and I suppose I do. But when you use coercion and shame to force my body to comply with your wishes, you commit an act of violence. My body doesn't belong to everyone, just because I'm a woman. It belongs to me — and, if I am nursing, my baby. I just chose not to.

I don’t blame the nurses or the lactation specialists, who only followed baby-friendly hospital protocol, and likely believed they were doing what was right. But I want them to know that ignoring a woman’s wishes for her body is never justified — no matter how lofty the goal. I want them to know that fear and shame are tools of oppression, not care.

Some women don't want to breastfeed, and that's all right. I know it's all right, but still I feel guilty.

Only in a dream do I feel truly peaceful about my decision. In it, Clara is grown, and holding an infant of her own. Nursing hurts, she says. Mommy, it hurts.