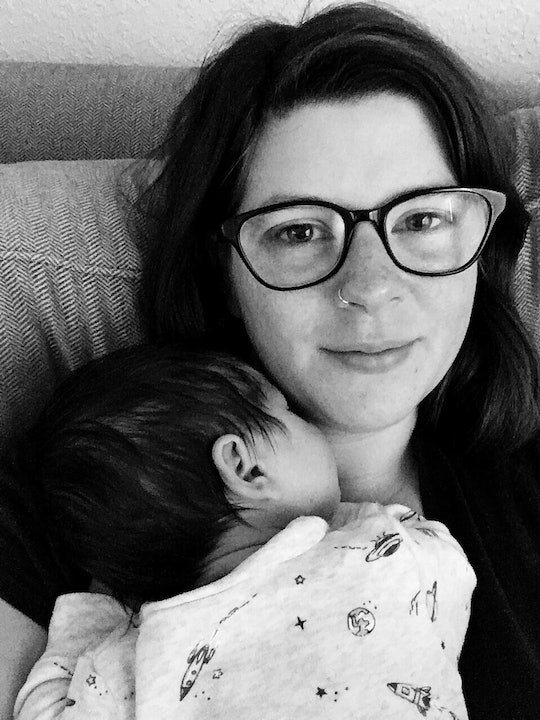 I Didn't Do Tummy Time, & My Baby Turned Out OK

When I got pregnant with my first baby, I intended to follow all of the rules. I exclusively slept on the left side of my body, counted kicks for a few minutes every day, and never ate deli meat (unless it was zapped in the microwave first). After my daughter was born, I kept following the rules. I put her on a rigorous feeding schedule given to me by my lactation consultant. I also faithfully kept a journal of wet and dirty diapers. For a while, we did tummy time, per my doctor's suggestion, but my daughter hated it so much that with my next child, I just stopped doing tummy time altogether — and she turned out just fine.

For the first few months of my first baby's life, I felt it was important to listen to the doctor's advice. I wanted to feel confident that I had done whatever was necessary to help my baby grow into a healthy kid, and I believed listening to her doctor was the best way to accomplish that goal.

But my daughter just hated tummy time. During those earliest weeks, when she had very little control over her neck, it was so difficult for her. I spent so much time planning when I could squeeze in a few minutes before a feeding, because I knew she would be pissed when she was through.

When my second child was born, however, I was much more confident in my decision-making as a mom. I still wanted to do what was best for my daughter, but I wasn’t so sure that blindly following every single direction given my her doctor was the best way to do that. So after some research and a lot of contemplation, I decided to ditch tummy time.

Tummy time is meant to help strengthen the muscles in babies' necks and keep them from developing flat spots on their heads. The Safe to Sleep campaign officially recommends that babies spend three to five minutes on their tummies, two to three times a day. Moms are instructed to observe this practice from their child’s first day home from the hospital and then to extend tummy time as their babies grow older.

Not everyone is a big proponent of tummy time. Janet Lansbury, a parenting coach and teacher of RIE Parenting, a philosophy of child-rearing that promotes giving infants and children independence and unguided free play, isn’t a fan of tummy time. She argues that child-directed motor development is always the best, going as far as discouraging children be sat upright in bouncy seats or high chairs until they are able to do so themselves.

When it comes to ditching tummy time, Lansbury hasn’t been the only one to question its necessity. In 2013, a study was published in Early Human Development that questioned the effectiveness of tummy time, since no difference was seen in the babies who had regular tummy time and the babies who didn't.

A few weeks before my second daughter was born, I stumbled on this research. To be perfectly honest, I was looking for any reason to give up this dreaded practice, because my first baby had hated it so much. I considered consulting with her pediatrician first, but I ultimately decided to follow my gut and my daughter, who is now three, didn’t do a minute of tummy time until she was old enough to get to her tummy herself.

Honestly, I never doubted my decision. She was developing quickly, meeting her milestones, and she wasn’t developing any flat spots on her head. By the time she was crawling, I felt certain that if I had more children, I would never observe tummy time again.

Ultimately, I think it comes down to realizing that what works for one baby doesn’t necessarily work for others.

The birth of my third child, however, changed my perspective on tummy time. A month into his life, we noticed he was showing preference to one side. When we held him, his head always rested on his left shoulder, and when he was on the floor, he could only turn to look towards one side. His pediatrician diagnosed him with torticollis, a condition that literally means "twisted neck." He prescribed physical therapy and lots and lots of tummy time. So I placed my baby on his stomach every day, several times a day.

Ultimately, I think it comes down to realizing that what works for one baby doesn’t necessarily work for others. Today, I still feel that skipping tummy time for my second child was a good decision, but I am glad I was open to seeing things differently when my third came along. Situations like this are one reason why parenting is such a challenge. Each child is different, and each child is constantly changing. As a mother, I have to be ready to weigh the advice I am given against my own instincts, and make the best decision for each child.