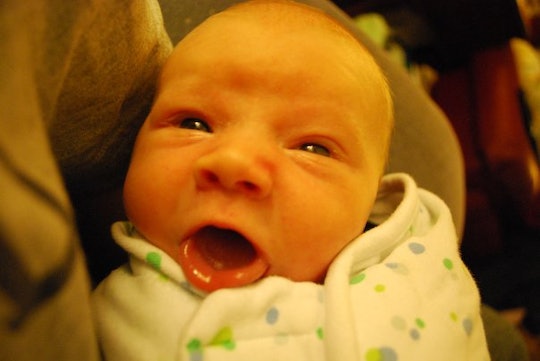 My Birth Experience Made Me Feel Like A Warrior

From the moment I walked into the door of my hypnobirthing class and nestled my pregnant self into the beanbag poof chair, I was a believer. I believed that my body had the ability — no, the need — to birth my son without doctors, without medical interventions, without IVs, and without medication of any kind.

Of course, when it actually came time for me to go into labor, nothing went according to plan. Ultimately, I didn't end up having a "natural" birth, but that didn't make me any less of a birth warrior.

The teacher was a kind, gentle soul named Bridget. She introduced us to the concept of hypnobirthing, or the process of giving birth without using drugs by relying on breathing and relaxation methods. She talked constantly about the ways our partners, seated next to us, could support us through this birth journey. On the first day, we were given CDs of a 30-minute guided meditation. This was supposed to open us up to rise above our conscious selves, to see contractions as “surges” and “waves” in a giant ocean, instead of just pain. We were instructed to listen to the CD every single night before we went to bed, and we were told that it was OK if we fell asleep while we were listening to it.

We watched several hypnobirths on the TV Bridget had wheeled into the room. They were silent, with women closing their eyes when they had contractions. They seemed very focused on their breathing. We saw all the glory of the baby's head crowning and the blood and the vernix, the white, cheese-like substance that covers the baby's body after childbirth.

Since these were the first births I’d actually seen, I based all of my expectations for my own birth on them. I envisioned my own labor and delivery: My husband would sit behind me, with me between his legs. We would all breathe together. In and out, in and out. We'd do guided meditation. We'd ride the ocean. Our babies were coming, and we were ready to welcome them.

The birthing classes featured badly Xeroxed handouts: what to pack when you came to the birth center, a list of nutritious foods to eat to support your pregnancy. I listened to my CD every night. I became increasingly frustrated and anxious.

“What if I can’t focus on my breathing?” I asked.

“Try to visualize your breath,” Bridget told me.

“I tried that," I said. "What if I can’t turn off my conscious mind because I’m too busy thinking of other things?”

The answer consisted mostly of a giant, hands-in-the-air shrug.

I was not gently riding waves in an ocean. I was in a badly-lit building in a mini-office park, panting and pacing to cope with the pain.

Despite this, I kept listening to my CD. And when my labor started, I thought I was doing well. I breathed through my contractions. I rocked on a birth ball. A day and a half later, I was screaming in pain. My midwife finally agreed to meet us at the birth center, where they promptly put me in the tub. It was cold. I cried. I was told I was suffering from what’s called back labor, the term used to describe what happens when labor pain moves around to your back, and you get no break between contractions.

These were not waves. These were not surges. This was a vise tightening on my back. These were flames wrapped around my body. I was not gently riding waves in an ocean. I was in a badly-lit building in a mini-office park, and I was pacing and panting to cope with the pain. I did not sit on the ground between my husband’s legs. I did not breathe in and out, in and out. I panted like a dog and during the contractions, my husband said I made noises like a dying wildebeest.

I began vomiting from the pain. There was no hypnobirthing protocol for this. They’d tried playing the CD for me, but I just screamed through it. Finally, my husband insisted I go to the hospital. This hypnobirth was not going to happen.

I was so dehydrated from the vomiting that they had to put three bags of water into me before they could start the epidural. Suddenly, the pain stopped. It just ended, like someone had pulled a plug. They had to give me pitocin. I pushed on my back for three hours. But after that, my son was born.

There were no oceans or waves or surges in my birth. There was pain, and a lot of blood, and an epic, star-shaped tear my darling OB stitched up to perfection. There were drugs: lots of them. But I ended up with a beautiful, healthy baby.

I did not have a "natural" birth; in fact, I narrowly escaped a c-section. By my class's standards, I was a hypnobirth failure. I didn't feel guilty about that; with my history of anxiety, I ultimately don't think the class was a good fit. But I was still a birth warrior nonetheless.