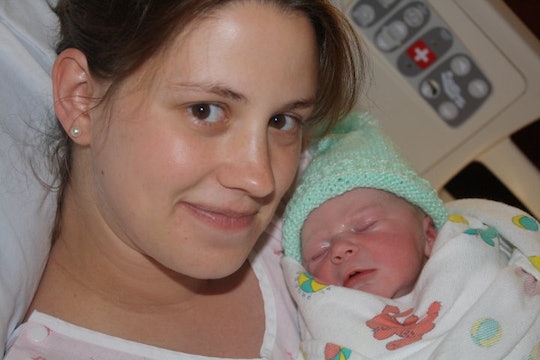 My children love to hear the stories of how we chose their names. My oldest's was chosen in one of those movie-like baby-naming moments, when my husband and I both kind of looked over at each other and we just knew her name instantly. But my second daughter? Well, my second daughter's name was all me. I didn't let my partner pick out our baby's name and because of that, he really had nothing to do with naming her. Surprisingly enough, we were both more than OK with that.

Before having kids I never really believed people who said they knew exactly what they're having when they find out they're pregnant, but somehow, as soon as I had my first baby, I knew I'd have another shortly after and that she, like her sister, would be a girl. For some reason, I didn't have a doubt in my mind about it. I felt like I knew I'd have daughters close in age (probably because I didn't have a sister close to my age growing up and I longed for that relationship my entire life), and wouldn't you know it, my second baby's due date fell only days after my first daughter's.

We didn't find out our baby's gender, since we'd made a little tradition out of keeping it surprise with my first (we were convinced she was actually a boy), but it wasn't necessary for me. I knew she was a girl anyways, although my husband may have been holding out hope he'd finally have a son.

Her name —Mya — had everything that I wanted and it seemed absolutely perfect to me. Unfortunately, my husband wasn't very fond of it. At all.

I had such complete confidence that I was having another girl that I wasted no time in choosing her name. I wanted her name to start with an "M" and I went from there. I poured through baby name books and articles, testing names out, rolling them off of my tongue, practicing the phantom scolding I'd give her after she'd flushed toys down the toilet. I couldn't tell you exactly what kind of name I wanted, but I knew I wanted it to have a certain lyrical quality and to also flow with her big sister's name, Ada.

Eventually, I landed on a name that felt perfect and right and give me a tangible feeling of contentment when I wrote it out — a practice akin to the those high school days I spent doodling my name with my boyfriend's last name. Her name —Mya — had everything that I wanted and it seemed absolutely perfect to me.

Unfortunately, my husband wasn't very fond of it. At all.

But by that point, I was so pregnant and so freaking exhausted from working night shifts as a nurse and chasing my toddler around all day that I didn't have time to mess around. I told him that would be our baby's name, unless he could come up with something else to dazzle me right off my swollen feet. I knew Mya was the name meant to be hers, and I really didn't give him any room to convince me otherwise.

I realize it sounds kind of rude to say, "and that's final!," when it comes to something so huge as naming a child, but I guess that's exactly what I did. However, I gave him a chance to come up with something else and then we could talk about it, but he'd already deferred to me, and I'd already found the perfect name.

To be honest, I was so sure of the name I chose for the daughter that I didn't even pick a boy's name. I of course extended the offer to let my husband choose both an alternative girl's name and just try to change my mind, as well as a boy's name just in case, but he didn't take the bait on either. And so I went into delivery with full confidence I'd be delivering my daughter Mya.

In the end, however, I guess you could say it all worked out: despite my complete confidence that I was getting my girl and giving my daughters a close sisterly bond for life, my second daughter came out a daddy's girl through-and-through. She had severe colic when she was young and it took me several weeks to figure out how my diet affected her through my breast milk. More often than not, she'd try to nurse and then literally push me away, arching her back and screaming. I would cry and cry, thinking my baby hated me. In those moments, my husband took over. He held her in a football hold position, neatly tucked under his arm, and they completed countless laps around the house to ease her belly and soothe her crying. He did it for hours and hours, months and months, and as a result they developed an unshakeable bond that still continues to this day.

Mya loves her dad more than anything, and I can only shake my head a little and smile. It doesn't at all surprise me. Despite having absolutely nothing to do with naming our daughter, my husband still seems to have the last say.

More Like This
30 Marvelous Baby Boy Names That Start With “M”
I’m A Newly Single Mom. How Do I Get Over My Body Insecurity?
53 Rainbow Baby Names Filled With Hope
Everything You Need To Know About Missionary Sex During Pregnancy