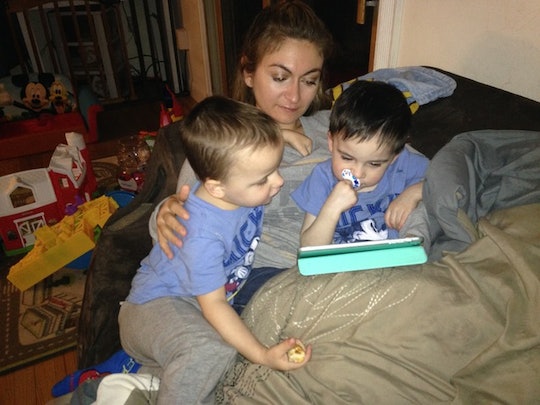 So many cartoons and kids books stress the importance of learning to share that I thought I had no choice but to teach my own kids to share as well. But learning that more and more parents are starting to turn away from that ideal and are not teaching their kids to share with others made me wonder why we force our kids to learn this social skill. Is it really important? Am I doing this because it's good for my kids in the long run, or is making them share a way to feel good about myself in front of other women?

As a child, I learned to take turns and share just like my sister and all of my friends, but as an adult sharing isn't something that comes naturally to me. My mom and I may swap clothes on occasion and I'll gladly lend a friend my lip balm, but my husband has another thing coming if he expects to get a bite of my brownie. I would never let a stranger walk up to me and take the keys to my car, so why should I force my kids to share their personal sand toys with some kid they've never met before at the playground?

I decided to stop making my 3-year-old twins share for an entire week to see just how important this skill is when raising kids. They were welcome to play with any toy for as long as they wanted, but no "calling fives" on any object in particular — if they walked away and their brother picked up the toy, then they needed to find something else to play with. I was curious to find out if my kids would end the week as tiny sociopaths or would we all realize that sharing overrated?

Here's what I learned:

Maybe it's this whole no-sharing experiment, or maybe even 3 year olds can have a case of the Mondays, but my house felt extremely chaotic and loud on day one. When Lolo was playing with a puzzle this morning and Remy wandered over wanting to play with it, both boys responded as they usually do: Lolo yelled, "No," and tried to shield the puzzle with his body, and Remy started to wail. Both boys looked at me expectantly, but they were floored by my reaction.

Instead of my usual pleas for them to take turns or share before forcibly removing Lolo to timeout and letting Remy play with the puzzle, I told Remy to go play with something else and wait until Lolo was finished. Remy wailed louder and Lolo got a bit drunk off the power and told him to, "Go, Remy, away, GO!" This pattern repeated for the next three days, with one twin taunting the other over not having to share a toy.

I thought not making my kids share would lead to less tears and screaming, but I think there's more crying than ever now. If this is good parenting, it sure doesn't feel like it. I get now why my mom would just take away whatever toy my sister and I were fighting over and stick it on the top shelf in the closet until we got over it. The constant need to comfort the child who wants to play with his brother's toy is exhausting.

Having A No-Sharing-Required Policy Isn't Making Things Any Easier

As expected, the first few days under our new "no sharing required" regime brought lots of tears. When I'm trying to teach the boys to share toys I spend a lot of time playing referee while my poor coffee goes cold, so I was really looking forward to kicking back and doing a little less momming under the new no-sharing rules. But enforcing a no-sharing policy required just as much work on my part as when the boys are told to share.

The difference was that instead of trying to console the child with the toy to give his brother a turn, I was tasked with defending the child with the toy. I stated by trying to find the other boy something else to play with. When that didn't work, I resorted to my middle basketball school days of playing man-on-man defense to try and let the child with the toy play in peace. ( I was second string then and I haven't changed much since.) My Fitbit appreciated the extra cardio, but I was annoyed that not making my kids share their toys involved just as much work on my part as teaching them to share, if not more.

I'll admit I was feeling a bit smug at the start of this week. I thought the concept of treating kids like adults by not forcing them to share made sense until I realized that adults share things constantly. We were out to dinner and the boys wanted to sit at a booth, because they feel like big boys when they don't need highchairs. All the booths were occupied, with one family cleaning up and about to leave. I told the boys if they wanted a booth we'd need to sit at a table for a few minutes and wait patiently. That's when I realized this was essentially a lesson in sharing, just scaled beyond the playroom and into the real world.

If you live or sleep with a significant other, you probably share things like a bathroom, snack foods, or a bed without even reflecting upon it. In society at large, adults are forced to share things like store stock, parking spaces, or the coveted outlets at Starbucks constantly. Instead of seeing sharing as nothing more than a way to show off to friends and family about having well-behaved and sweet children, I realized that sharing is actually a hugely important social skill for kids to learn if I want to raise my boys to grow up and not be jerks. Needless to say, I was regretting taking on this experiment.

Deep Down, My Boys Like Sharing (Even If They Don't Know It)

After a few days, the novelty of playing with a toy just to spite their brother seemed to wear off for my kids. I noticed they were playing together more, and that one twin wouldn't jerk a book or puzzle away from his brother defensively when his brother walked by. I think once my kids realized they wouldn't get a toy taken away under the guise of "sharing" they were less hostile towards the idea of playing together. Knowing a toy wouldn't be taken from them just because their brother wanted to play with it made them more willing to share a toy without being prompted.

Besides playing more peacefully together more often, the boys also started to share on their own without the need for my interference. They'd ask each other if they could take a turn, or offer each other a turn, and if the answer was no, they were less likely to have a meltdown over it. (Thank god.)

Before our no-sharing experiment, if one boy wanted a toy and his brother said no and the boy who asked to play with it started to cry, my reaction was to get mad at them for not being polite and immediately make the boy playing with the toy hand it over. I thought I was doing the right thing because I thought the tears were caused by extreme toddler emotions, but I realize now that I was being scammed.

Sure, emotions run high when my kids don't get what they want, but since this experiment started they've shown me they're capable of shaking it off when their brother doesn't want to share. I realize at least some of those tears were fabricated to get a rise out of me and make me give them what they wanted. I see now that there's a difference between telling my boys to share because I want them to understand the world requires us to share things with others and making them share because I feel badly that one is crying or because I want them to be "nice."

Is Sharing Really Caring? Or Is It A Waste Of Time?

Going into this experiment, I really thought sharing was way overrated, but I was absolutely wrong. I assumed it'd be much easier to supervise playtime without sharing, but trying to calm down one upset child and stop the other one from taunting his brother was a lot harder than explaining them the importance of sharing and asking them to take turns.

Once I thought about it I realized much of being an adult is learning patience and how to get along with others, and that teaching kids to share is a fundamental and vital part of life. It makes sense that we ask kids to share insignificant things like toys but don't ask adults to share their trinkets because the things we share are so much more important: money, our homes, our side of the bed, our space in the bathroom; our lives. Teaching kids to share toys is like training wheels for the real work later on.

So I'm going to continue to teach my kids to share, not only because it will help them be nice to their peers as children but because it will help prepare them for the realities of adulthood. Except for cupcakes, of course. Because when it comes to pastries, this family believes very firmly in every person for themselves.