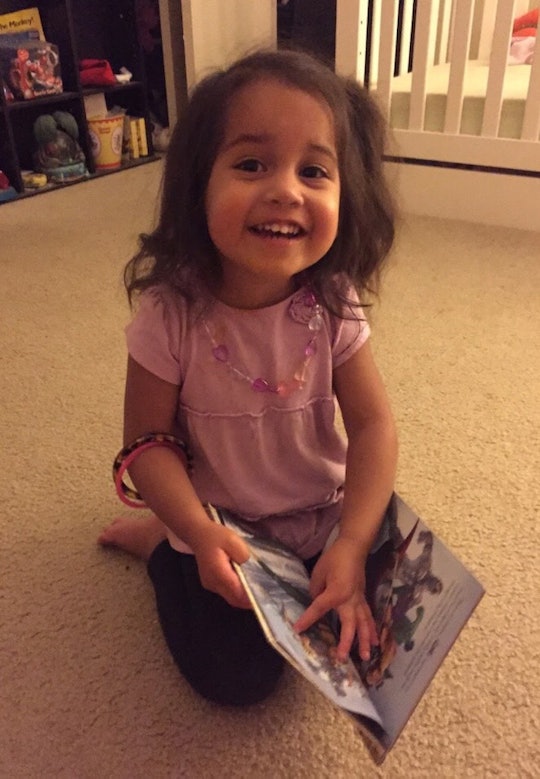 I Didn’t Realize My Toddler Had Nursemaid's Elbow, & It Was Scary AF

My daughter is turning 6 this year and I can still remember the pure terror I felt that random day back when she was 2 that started just like any other. My daughter was sitting in her tiny chair that fit perfectly with our coffee table. My husband and I were watching TV while she sat drawing, snacking, and watching a little bit of TV as well. I remember glancing at my daughter, and giving her a "just because I love you" smile. She appeared happy, while she made a mess of her food. But it was during that quick glance when I first noticed something was wrong. Her arm — something wasn't right.

I like to call it my mom gut feeling. It happens once you become a mother, this alarm that rings out when on the outside your child appears to be perfectly fine, but there is a gnawing feeling in your stomach telling you something is off.

"Are you OK, sweetie?" I asked her, trying to not to appear worried, though my wide eyes probably said otherwise.

My daughter looked over and gave me a half-smile. She was trying to ease my nerves; who knew kids were so smart at that young age?

I nudged my husband. I tried to remain calm and speak in a soft tone, as if our daughter really knew what we were discussing anyway.

When my husband's face went from curious to concerned, I knew for sure something was wrong.

I went up to my daughter and lightly touched the arm that appeared to be motionless. She grunted and motioned for me to not touch her. I touched her other arm, moved it, and she was fine. I looked up at my husband with water swelling in my eyes.

"What should we do? Should we call her doctor?"

Call it being overly cautious or that motherly instinct, but I knew something was wrong with my daughter and as her parent I needed to investigate and solve this problem.

As first-time parents we were always on high alert...

It was a Saturday so we knew the chances of actually getting a hold of her doctor were slim to none. And I did not want to sit for hours at an Urgent Care — the closest one to us at the time was not close at all. We lived less than five minutes away from a hospital, the same hospital where I gave birth to my daughter, so I was leaning toward just taking her to the emergency room to get checked out.

My husband, however, wanted to wait it out and see if she would improve. It made sense since we technically had no idea what was going on, and as first-time parents we were always on high alert. My daughter would trip and fall and I would run to her as if something was automatically broken or bleeding. And of course she would get up and continue to run and laugh as if nothing ever happened, while I would still be in a kneeling position and trying to get over being traumatized.

We waited it out a little bit until I couldn't take the sight of her not move her arm anymore. "Let's go to the ER," I told my husband. And since my husband knew I was a determined and overly worried mother, he didn't question me.

I carefully picked up my daughter. I hated seeing her in any sort of discomfort and hated taking her to the doctor's or a hospital. At the hospital, I remember filling out a form where I had to explain what was wrong. I was completely unsure of what was going on. "She cannot move her arm," I wrote. I wasn't sure if it was sprained or broken. I mean I figured if it was broken, she would be screaming in pain.

After what seemed like forever, we were called back into the examination area. The nurse asked what was wrong and I replied that my daughter couldn't move her arm and I wasn't sure why. We were provided a bed and my daughter wore a miniature hospital gown. The drama gave me a sinking feeling, but my daughter still seemed fine. She was the same upbeat and carefree 2-year-old, just couldn't move her arm. The doctor conducted a quick examination and wanted to have x-rays done on her arm. "Anything to make sure she is OK," I thought to myself.

'What the hell is Nursemaid's Elbow?' I thought.

I will never forget the blood-curling screams I heard when my daughter got her x-rays done. The nurse placed my daughter's arm on a bed/table and had to adjust the way her arm was in order to get a different image. My daughter was not having it. She screamed and cried. "It's OK, baby," I told her as I held her body in place. The nurse wanted her to hold still but telling that to a toddler is easier said than done. My daughter was completely fine up until she had the x-rays.

Finally, after the scans were taken care of, we were taken to another room where a nurse examined her again.

To my astonishment, my daughter was moving her arm. I was angry and happy at the same time. Was she faking it? Was this trip to the ER pointless? But I was relieved that her arm could actually move and nothing more serious appeared to be going on.

Apparently, this condition is quite common with young children. It is the name for what happens when a child's elbow is partially dislocated, and can occur from infancy up until age 6 or 7. To treat nursemaid's elbow, you need a medical professional to "reduce" the dislocation — pop the bone back in place. Yeah. I studied everything I could when I become a parent, but this was something that I never came across in any of my parenting books. How in the world did she dislocate her elbow? My memory raced with details of the days leading up to the morning when she couldn't move her arm. We went to my parent's house and I swung her around a little bit. Was that it? She was also playing in the living room and tripped and fell. Maybe it was that. I blamed myself, I blamed my parents, I blamed my husband; I blamed anyone who was near my daughter.

But I mostly blamed myself. I felt like the "Worst Mother of the Year" award was placed in my hands. I didn't have a speech prepared, just guilt. I wasn't watching her enough or paying close attention to how she acted after it happened.

To top it off, it appeared that when the technicians moved my daughter's arm around for the x-rays to be done, they popped her elbow back into place. All of her screaming and crying during that time suddenly made sense.

My daughter got some stickers and we were on our way home. To this day, she does not remember it happening, but it is a memory I will never forget. I realized I should always trust my motherly gut instinct and be more aware of what my daughter does. I know I can't protect her from everything, but I learned that parenting comes with many surprises and all the books and classes in the world won't prepare you for the unexpected.

More Like This
Can Elderberry Help Prevent Illness In Kids? Doctors Weigh In
What Is RSV?
This Is What It’s Like To Parent With OCD Right Now
The Best Halloween Family Pajamas To Match Your Boos