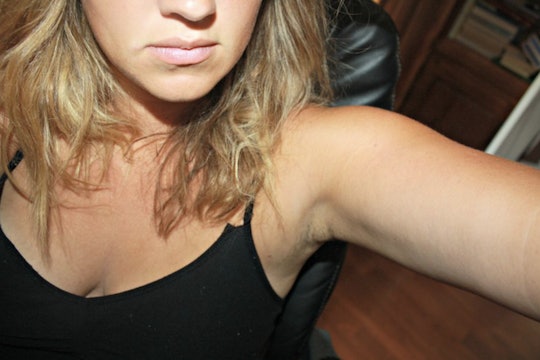 A few weeks ago while we were all sitting around the dinner table, my 5- and 7-year-old daughters spotted some stubble under my arms. As I stretched back innocently with my arms over my head, they were horrified. “Ew, Mom!” they said. “What is that??”

I couldn’t believe they didn’t realize that everyone, mom included, had armpit hair, and even when I explained to them that they too, would sprout their own someday, they continued to be grossed out. I insisted that pit hair was not, in fact, gross and it was totally normal, but they weren’t buying it.

Thinking ahead to a few years down the road when I know they will be faced with their own body image issues that make puberty the fun time it is, I decided to do more than just talk about body acceptance.

I decided to live it.

I realized I, myself, hadn’t seen the natural state of my armpits since I was all of 11. I mean, how hairy could they even be? For the next eight days, I decided I would forgo shaving in an attempt to show my husband, myself, and my daughters that a little hair is totally nothing to be afraid or ashamed of.

Little did I know what I would discover along the way …

Day 1: It's Way Harder To Stop Shaving Than You Would Think

To be completely honest with you, I am almost embarrassed by how difficult this little experiment was for me. I wanted to give up after day three and found myself having a little talk-down in the shower, holding my razor up like a terrorist in distress.

"Just put the razor down and no one gets hurt, Chaunie!"

I just didn't anticipate, first, how automatic shaving my pits is, something I don't even think about on a daily basis; and second, how dirty I would feel. I had such a hard time taking a shower and still feeling "unclean.” It was physically painful for me to stop shaving and, to be honest, I took to wearing a lot of billowy-type shirts (like the one above) to cover up, just in case someone might spot my unseemly underarms, which looking at the pictures now, wasn’t even that bad.

Much to my surprise, the biggest takeaway from this little week-long hair sesh was that armpit hair actually has a purpose, you guys.

I've always been on the sweatier side and am one of those lucky females who pretty much needs the prescription strength deodorant all of the time to even make it through half a day, so I fully expected to stink my way through this assignment. On the contraire, however, I found not only was I not stinky, I actually didn't have one instance of B.O.

Turns out our sweat glands actually work overtime when we shave off that hair. Who knew?

Day 3: My Husband Was Shocked — And Then Couldn’t Care Less

My husband totally went into this whole thing pretty much sure he would be disgusted by me. He insisted that he could handle any type of body hair that I would decide to regain control of. Pubic hair? Not a problem. Leg hair? Wouldn’t even notice. But to him, there was something about pit hair that seemed so much... grosser.

“It’s just so manly,” he tried to explain. And while I wasn’t really buying his reasoning that pit hair was any more disgusting than any other type of body hair (not to mention, I’ve never once been grossed out by his pit hair), it did make me a little self-conscious, in terms of shall we say, the marital embrace.

And I’ll be totally honest with you: I displayed my pit progress to him daily and he was completely horrified. Day seven was particularly hard for him. He said it wasn’t really the hair that was gross to him, but just the mere fact that he had never seen me with it before was really shocking.

By the end of the week, though, he had completely stopped caring. Morale of the story? It made me wonder if we women had never started shaving in the first place, maybe none of this would be gross to anyone.

Day 4: Not Shaving Can Be Totally Freeing

Although by the end of the week I was literally itching to shave, I have to admit that the extra time in the shower every day was kind of nice. I’m not saying that I’ll be joining Miley in dyeing them anytime soon, but I have to admit that I enjoyed not having to worry about shaving and even (strangely enough) came to take some sort of weird pride in my pits. It was like I was a rebel in the world of the hairless women. I mean, we say we should all embrace our bodies and love ourselves and what not, but what we really mean by that is the toned, tamed, filtered version of our bodies, right?

Instead of that, it was totally freeing to actually just let my body be.

Day 5: My Daughters Learned That Women Have Hair, Too

Unlike my mom, who was completely horrified when I came over and proudly lifted my pits, my daughters weren't really fazed by the fact that their mom was suddenly sporting armpit hair.

My oldest was cuddling with me one night on the couch and when she spotted the new lush landscape of my under arms, she just shrugged. I know that they are young enough to still be impressionable, so it was my hope that in showing them what armpit hair can look like before they go through puberty, they won’t be as fazed or grossed out by it.

They took me constantly pestering them with speeches about how women can have body hair too daily in stride, because after all, they are only 5 and 7, but my oldest still insisted that all armpit hair is “gross.”

Day 6: A Massage Would Reveal All Of My Bodily Insecurities

On day six of my free-the-pit-hair experiment, I realized, much to my complete and utter horror, that I had scheduled a massage about two months prior that I could no longer cancel without being charged.

Vacillating between what I should do about the fact that my massage therapist always insists upon stretching my arms and doing all sorts of strange, new-agey type things such as flapping my limbs about, I pondered just blurting out an apology ahead of time (I’m a writer, it’s for an article, sorry!) or just going with the hairy flow.

I was really and truly embarrassed about the fluff beneath my arms until I realized how ridiculous I was being. I mean, really. Why would I care that much about what some stranger is going to think about two inches of hair on my body that she may or may not even see?

So off to my massage I went, hairy arm flaps and all. And it was fine. I’m not sure she even noticed and, more importantly, I didn’t care. Which is kind of the point, right?

Day 7: Where I Hide At Home

I admit, by day seven and into day eight, I was giving up and feeling gross. The feminist in me wanted to embrace the no-shaving, body hair-freeing individual I knew I could be, but the culturally-honed hygienic in me just wanted to have freaking clean armpits again.

When I found myself turning down an invitation to a pool party because I was too nervous to be seen, I knew it was time to throw in the towel (the razor?). After I got the baby down for a nap, I raced up to my bathroom, lathered up right in front of the sink, and finally gave in to what I had been longing for for eight whole days. Just like that, I was back to being a “normal” member of society.

What A Week Without Shaving My Pits Did

Honestly, I think as women, we really overestimate how much people care about our bodies. I know women are objectified in awful, horrible ways, but all I’m saying is that unless you’re Julia Roberts on a red carpet flashing your fur under your arm, no one is really going to care all that much.

I’ll probably never fully grow out my armpit hair because I’m fine with shaving and I guess I’m going to accept this burden of womanhood that has been placed on me, but this little lesson definitely helped me be more comfortable with my body. I’ve now taken to wandering around in public places imagining how cool it would be if no women ever shaved and how different the world would look. Ads in bikinis with some fur patches? Would they have the same sex appeal? Would women be more kind to one another if we weren’t all so angry about our hair removal routines?

But bottom line, my goal was to show my girls that there is nothing —absolutely nothing — about their bodies in any way, shape, or form that could ever be disgusting. And if they want to rock the armpit hair that will eventually sprout on their bodies?

This mom will be all for it.