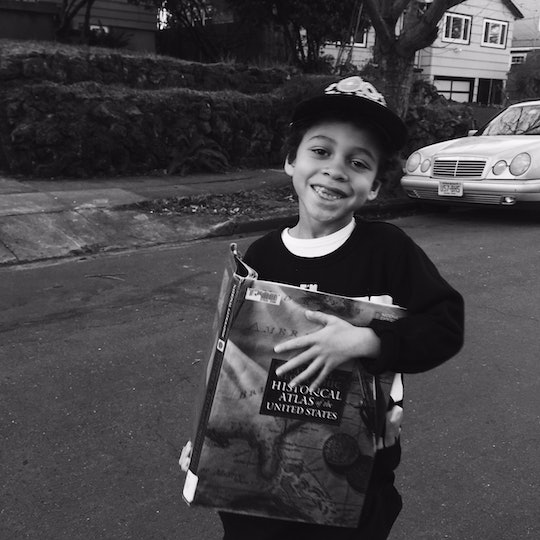 I Don't Celebrate The Fourth Of July, But I Want My Kids To

My 6-year-old son loves America. And no, I am not exaggerating when I say he loves it. He can tell you when each state was added to the U.S., what their capitol is, and what their state is known for. Last year I introduced him to the Hamilton soundtrack, and he was so amazed by Alexander Hamilton's story that he began researching all the Founding Fathers, which led him to learning about every President. At this point, he has an extensive recollection of why most presidents were elected, how long their terms were, where they were born. He's fallen completely in love with America, which is the opposite of how I feel about this country. I don't celebrate the Fourth of July, but I want my kids to. It makes things interesting, for sure.

I grew up celebrating the Fourth like most people. My parents never made a big deal out of it, but we'd always barbecue and go watch fireworks. We didn't talk about why the holiday was important, and as a child I didn't have any particular attachment to it. When I entered adulthood, I became less and less eager to celebrate a holiday that seemed, to me, more about getting together to eat food and wear flag-themed clothing than anything else. The last time I truly celebrated was a few years ago, when I was in California, I went to a Fourth of July party. It was fun, but there was little emphasis on the actual holiday. There was, however, a lot of emphasis on beer and cake though. I remember thinking I was doing what everyone does on the Fourth, just partying, and in a round about way appreciating the country I grew up in.

Except I've never really appreciated America. I've tried hard to, but I'm reluctant to have any love or appreciation for a country that's shown me that my existence as a black person is a burden. That reminds me at every possible turn that I'm still not as free as the majority of white people in America. For the last four years, I've been learning about being black in America, trying to understand how white supremacy has seeped into every part of my life and the lives around me. How, because of white supremacy, we've completely overlooked people of color — not keep people of color down, but to convince us that we are all "equal." But I've learned that no, we're not all equal. The freedoms we celebrate on the Fourth of July, those awarded to the white people in America in 1776, were not for everyone in America. These freedoms were, just as history tell us with legislation like the Three-Fifths Compromise and Jim Crow legislation, given to the people whose skin color offered them privilege. It was not for black people. And at the very heart of it, this is exactly why I don't celebrate the Fourth.

I know that what may be considered a routine police encounter has the potential to be life-threatening to people of color. I know that I don't want to celebrate a holiday that doesn't include black people.

In 2016, information and knowledge are a lot easier to access than they were 10 years ago. When I was younger I believed that we were living in post-racist America, and that living this way meant that we really were living in the land of the free. But my understanding of my own blackness has moved forward in the last 10 years. Now, I know better. I've been witness to the murders of black men and black women. I've watched those around me raise their black sons to be men far before they're ready. I've been challenged to do that with my own son. I know we aren't living in post-racist America anymore. I know that we're in the middle of a fight. I know that what may be considered a routine police encounter has the potential to be life-threatening to people of color. I know that I don't want to celebrate a holiday that doesn't include black people.

This is the first year my son is excited because he actually feels a connection to America, to the celebration of its freedom, and as his mom, I want to honor and celebrate that.

But my son is 6. And my son is proud of America. He thinks its history is rich, is fascinating, and is brilliant. He isn't wrong. The feats America has accomplished are brilliant. It is a country that was created out of the desire to be free, out of the desire to have choices. I will never pretend that how America was established and built is nothing short of amazing, and I'm not ungrateful to live here. Its just that the Fourth of July doesn't feel like a holiday for me. It wasn't until June 19, 1865 that the war was declared over, and slaves were told they'd be set free. That is a day I celebrate, a day I've been introducing my children to.

For the last three years I've kind of rolled my eyes when we've been invited to celebrate the Fourth at friends' homes. I've insisted on telling my children just why I don't think we should celebrate. But this year is different. This is the first year my son is excited because he actually feels a connection to America, to the celebration of its freedom, and as his mom, I want to honor and celebrate that.

Because of my son, I am learning to have a new appreciation for the country I call home.

As a parent who feels mainly disappointed by America, I've struggled with accepting my son's love of a place that still sees him as Other. I've struggled with listening to him speak so proudly of the Founding Fathers, wanting so badly to interject and tell him how they all kept slaves, that we are descendants from slaves. It's not that he doesn't already know this, because he does, but I don't think he's at the point where he understands the magnitude of what slavery was and how it's affected his life. And I'm realizing, slowly, that I'm actually OK with that. I'm coming around to listening more to what he has to say about different battles that took place before America actually became its own country. I've stopped rolling my eyes when he dances around me explaining how in Chicago, you can go up into a tower and see Indiana, Wisconsin, and Michigan. Because of my son, I am learning to have a new appreciation for the country I call home.

I'm still not going to celebrate the Fourth of July this year, but I'm excited to watch both my children get celebrate this holiday together. They understand growing up in America in a way I never did. Part of me hopes that maybe in the future they'll feel differently about the holiday, and perhaps put more emphasis on the day black people were actually freed. Until then though, I hope they continue to learn about America. Not just the bad history, but also the history that has brought us to where we are today.