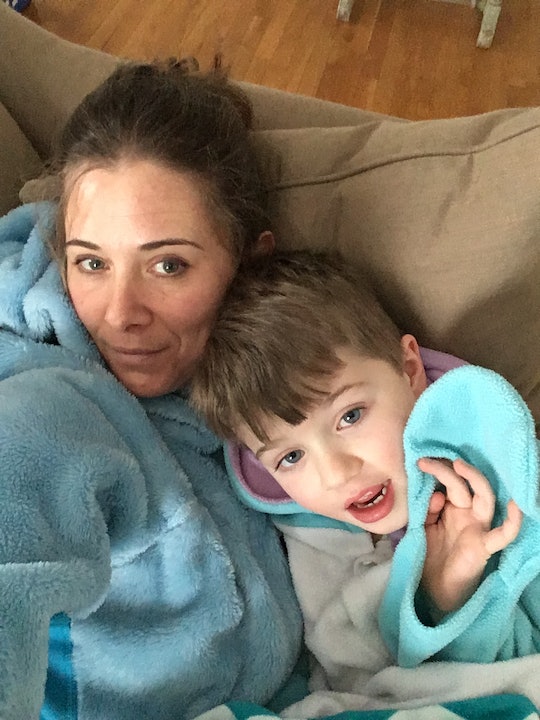 I Don’t F**king Curse In Front Of My Kids

I was two years old when I dropped my first F-bomb after a toy train fell off its tracks in my father’s living room. “Oh, f*ck,” I sighed sweetly, my diaper peeking out from the cuff of my cotton shorts. So goes one of many tales from the family lore.

For most of my teenage and young adult life, I had the mouth of a sailor. I don't know why. Maybe I was hoping to impress my three older brothers with my oratorical skills. I had been jammed into a blended family chocked with powerful personalities. I was hell-bent on fashioning myself into something else.

For me, the propensity for using curse words hung around. I never grew out of it like my family thought or hoped I would. These words became my punctuation, my easy-bake method for allowing myself to be heard.

When my oldest brother’s daughter was born, his wife implored me not to curse in front of their child. I was shocked by her request. I realized that despite my love of swear words, of course I wouldn’t curse in front of a child. Cursing in front of kids felt just plain wrong. It was only when I became a mother myself that I began to understand why.

I never swear in front of my children, and I don’t want other people to swear in front of them, either. It isn’t a religious or moral edict; to me, swearing in front of children indicates that you’ve lost control. When I'm spending time with my children, I don't need the punctuation or emphasis that swearing in the middle of conversation had given me before. Of course I get frustrated—with them, with myself, or with a situation— but instead of swearing, I growl or groan. It's like a form of meditation to keep my language under control. I've had a lot of practice at this point.

Parenting young children, as maddening as it can be, is all about imparting life lessons in chewable, carefully measured chunks. When you’re walking to preschool, you stop and look for worms poking out of the sand between sidewalk paving stones. When you’re in the grocery store, you wax on about apples and their various shades of red. You do these things whether you work or stay at home or some combination in between. Parenting is a teaching art, performed at all hours of the day.

Swearing is like splashing red paint all over a delicate painting. If young children hear curse words regularly, they either learn to use those words at inappropriate or embarrassing times, or they learn that the adults responsible for them are out of control. Neither of these options has a desirable outcome.

"Mom, what's an 'asshole'?" my son asked as I drove all of us home, still shaking from the incident.

Once, when I was driving with a carload of children including my nephew, a man took a dangerous turn into the road and nearly crashed into my car. It was a scary close call for both him and me, but he dealt with the situation by getting aggressive. He parked in front of my car, rolled down his window, and started screaming at me. I couldn't drive away. I was trapped. That's when my tiger instincts kicked in and I briefly lost my mind. I started screaming expletives right back at the man, shaking my fists and threatening to call the police. Eventually, he rolled up his window and peeled off and away.

"Mom, what's an 'asshole'?" my son asked as I drove all of us home, still shaking from the incident.

I started laughing and apologized to my kids for losing control. I explained that both the man and I had been scared by the fact we'd nearly collided, and that we both lost control and used words that were not okay for children to use.

Children are listening and learning all the time. I’ve trained myself to whisper the F-Bomb if I’m talking to a friend when my kids are within earshot and I just gotta have some kind of unruly emphasis. I’ve even trained myself to stand up for my no-swearing-in-front-of-my-kids rule with other people. A stranger walked up to me recently and started hawking on, foully, about a woman whose dog suddenly became aggressive in the sidewalk.

“I’m so sorry that happened to you, but I need to ask you not to use that language in front of my kids,” I explained.

My older kids were mortified watching me essentially parent another adult. But the experience taught them a lesson, too. Our family culture is to be careful and thoughtful about what you say out loud, and to expect the people you spend time with to do the same. At the very least, you should expect other people to respect your boundaries.

I’m no Mister Rogers—I’ll be the first to use the word “Mofo” to describe, for example, anyone who takes any kind of bureaucratic absurdity too seriously. While I’ll admit that sometimes I just want to be that relaxed parent with whom anything goes, more than that, I want my kids to focus on learning healthier ways of channeling anger or making their voices heard.

Using curse words is lazy, a way of making a statement when you’re at a loss for a better word to articulate what you want to say.

My older two children are 9 and 11. I’ve already taught them that swearing is not OK. I never taught my kids the curse words they apparently know and refer to as the "S-word," "F-word," or "A-word"—that’s what the school playground is for, I gather. But if one of them happens to lose control and punctuate their emotion with a curse word, I teach them how to back off, explain themselves in a more rational way, and try again.

Using curse words is lazy, a way of making a statement when you’re at a loss for a better word to articulate what you want to say. I want my house to be a safe haven for a whole range of emotions, from pure delight to palpable rage. The way I stand up for that value is to insist that everyone who enters our space respects our boundaries—say what you mean, man, and say it well.