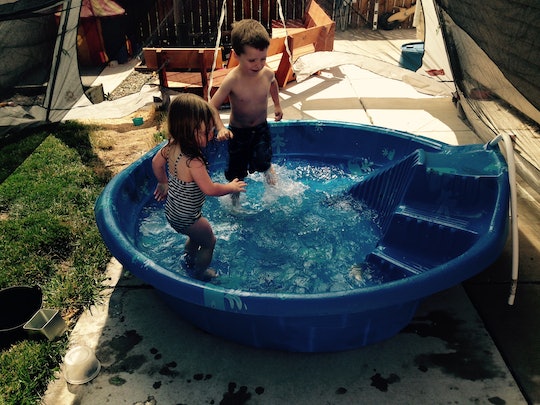 I Don't Give My Kids Baths Every Day, & They Are Turning Out Just Fine

When I had my first baby, I was alarmed by how sensitive his skin was. He was a winter baby, and we live in a high desert climate, a combination that would wreak havoc on anyone’s skin, let alone that of a newborn. I used gentle moisturizers on him as often as I could, but his skin still seemed to suffer. When I finally asked his doctor about it, she told me the problem was simple: I was bathing him too much. The solution? Fewer baths.

While I enjoyed our nightly bathtime ritual, I can’t say I wasn’t a little bit relieved to hear the doctor say that daily baths were overkill. Bathing tiny bodies is surprisingly difficult and time-consuming, and trying to lather up an infant with baby shampoo and not drop said wriggly infant into the bathwater is easier said than done. His doctor said once he was crawling, daily baths were fine, but for now we could do just a couple per week to stay happy, healthy, and clean.

Well, six years and three kids later, we never quite made it back to the daily bathing routine. The truth is, once I was freed from my obsessive bathing schedule, I realized I had no real desire to go back. Bathing kids is difficult and each kid has their own unique reason why I don’t want to bathe them frequently. So I don't give them baths every day. In fact, we're lucky if we get them in the bath twice a week.

My kids have their own specific quirks and issues when it comes to bathtime. One of my sons, for example, likes to take what he calls “shower baths," in which he fills the tub with shower water and does, well, I don’t know what. Pretends he’s in a lake during a rainstorm? What the hell do I know? There’s a lot of splashing that goes on. Kids do weird things, and this particular weird thing tends to result in a flooded bathroom floor and the use of no less than six full-size bathroom towels that require laundering afterwards.

My daughter, on the other hand, is basically impossible to get out of the bath. During her lengthy baths, she likes to tangle her waist-long hair by attempting to wash it all on her own. There is a lot of talk about being a mermaid. But bathing her is not so much the issue as the aftermath of bathtime, which is a long and harrowing battle of detangling spray and banshee screams.

I also have a toddler, who doesn’t understand that he will drown if he puts his face in the water while throwing a tantrum. He also doesn't understand that you can’t run in a bathtub. In fact, most toddlers don't understand anything when it comes to water, so bathtime is often stressful and dangerous. The worst part is that as soon as he’s out of that bathtub, it’s like trying to dress a greased pig. To be honest, if I can diaper him before he pees on the floor it’s a small miracle.

Once the water is running, every child in my home strips down and starts fighting to get in the water. They basically treat my hallway like a naked Thunderdome and fight each other through it to claim their victory. At least one of them ends up crying, even if I promise to bathe them just as soon as the other is finished.

So yeah, I don’t give my kids baths every day, and they are just fine. In fact, The American Academy of Dermatology says kids between ages 6-11 only need baths once or twice a week, so let’s not act like I’m some horrible mother letting her children become filthy stank monsters. I mean, sure, they get a little dirty sometimes, but that is what God invented wet wipes for. Unless they are vomiting or covered in such filth that CPS will be called if I let them out in public, twice a week bathing is more than enough for me. To be honest, I'm just waiting for summertime, when hosing them down counts as bathtime again.

More Like This
Stepmom Quotes & Sayings For Every Occasion
From Captions To Gifts, These Are All The Kindergarten Graduation Ideas You Need
Fun Ways To Celebrate National School Nurse Day
Ashley Graham On The “Fun, Organized Chaos” Of Raising Twins