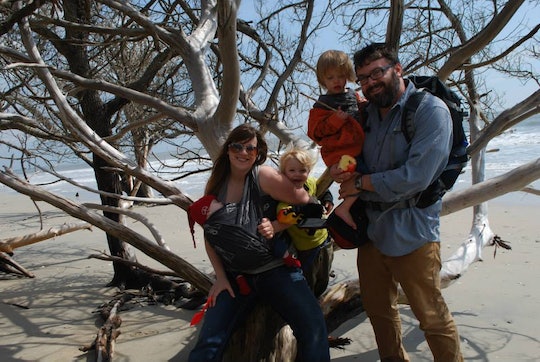 Why I Turned Down A Job To Keep Homeschooling

They contacted me through my Facebook page. A kind of a corporate headhunter, someone who already worked for the organization but was in charge of making a new hire. Everything was very hush-hush. She’d seen my writing on several parenting sites and wanted to talk to me about a job. A big job. A job working with a behemoth, well-known Facebook organization that was looking to move into the parenting space. Except I wouldn’t be the writer. I’d be the editor. Over several emails, the job description became more clear. At first, I’d be in charge of the whole blog, producing all the content and interacting with all the higher-ups. Then, as they hired freelancers, I’d edit 10-20 pieces a week, in addition to writing 1-2 of my own. The decision felt pretty immediate: keep homeschooling my sons, or accept a full-time job and leave the homeschool life (and everything that came with it) behind.

In this position, the headhunter told me, I'd have complete editorial control, within limits. The content was a world I knew well: parenting. Everything seemed pretty straight forward: I’d do one conference call a week, interact with the higher ups, answer emails, and generally always be available, though she didn’t say that outright. It was the kind of offering a writer like me might spend her whole career searching for. Between the never-ending hustle for freelance work, a full-time position felt like a gift. But that gift came with a choice: Stop homeschooling, or raise my boys the way my husband and I wanted to? Go corporate, or commit to the kind of family live we'd long envisioned?

This would be a major step up for me. I’m a writer; I had never considered becoming an editor before. Automatically more prestige, people working under me, a blog whose vision I personally could drive. I was starstruck. Except for one thing.

I stay home with three children, ages seven, five, and three. I am their sole caregiver from about seven in the morning until five o’clock at night. I manage to do my writing - and I write 5-8 pieces a week - in the mornings. I start before the kids wake up, and when they stumble into the living room, I shove some toast down their pieholes, flip on some Lego Scooby Doo, and keep going. Then at about 9 a.m., I begin the work of the day: homeschooling my 7- and 5-year olds.

I really, really wanted to be an editor. But I wanted my family life more.

A typical day goes like this: We do 20-30 pages of reading, alternating paragraphs, from the Notebook of Doom series. After that, Blaise (my oldest) spends half an hour at the computer on his math. We read several books and discuss them for social studies, then practice writing. Afterwards, we do some science. This all takes approximately two-and-half hours, during which I’m also reading books to the younger two kids, involving them in the academic work, and teaching both basic reading and the alphabet. By then it’s lunchtime, and we’re out of the house and off: to a playdate, to the library, to one of the museums. My days are chock-full. I don’t have time to fit in anything else.

“I know you don’t like it, but we could put the kids in school if the money’s right,” my husband said. Then I would have a real job. A full-time job, even if it wasn’t pitched that way — the tasks clearly added up to at least 30 hours a week. I would have to ditch all my other writing, because they wanted an exclusivity contract. I wouldn’t have time to parent and to edit. So my oldest would start first grade — where he can read at a third-grade level and detail the Civil Rights Movement but can’t draw a lowercase "g." My middle son, who balks at being separated from me at an hour-and-half homeschool co-op, would go to kindergarten. And my beloved baby would have to go to daycare.

This, I realized, was not the childhood I wanted for them. I knew I wanted to homeschool before they were born; I have most of a Ph.D and I love teaching. But instead of taking care of my sons and teaching them, I’d be editing. For myself. For the money.

I really, really wanted to be an editor. But I wanted my family life more.

So I waited for the salary. It was decent, but nothing I didn’t make freelancing. I was relieved. There would be no pressure from my husband to take the job — if the money had been right, we would've had to have a hard discussion about work. But I never wanted to work. I wanted to stay home with my kids and write. I wanted to give them a childhood free of hard obligations, one with lots of playtime and without the pressures of formal academia.

So despite the prestige that would come with being an editor, and the chance to launch what’s probably to be a big site — something people jump at! — I turned it down. I told the liaison that the hours wouldn’t work with my time, since I had small children at home and I wasn’t willing to put them into daycare. She thanked me. And that was that.

I felt a little sad as I sent the email. We writers, we often suffer from imposter syndrome — we don’t feel we have the ability to do what we’re doing, that we’re just fooling everyone, and one day will come a reckoning. An editor job would blow that right out of the water. But I want a certain kind of childhood for my kids. I want a certain kind of education for my kids. And that means giving up opportunities that I might otherwise have taken. I would have loved being an editor. But it would have changed our whole family. And I’m happy the way we are.